You are here: Home  /  History  /  Thanks to the Cardinal Archbishop of Valencia, His Holiness Pope Francis blesses the Way of the Holy Grail
History 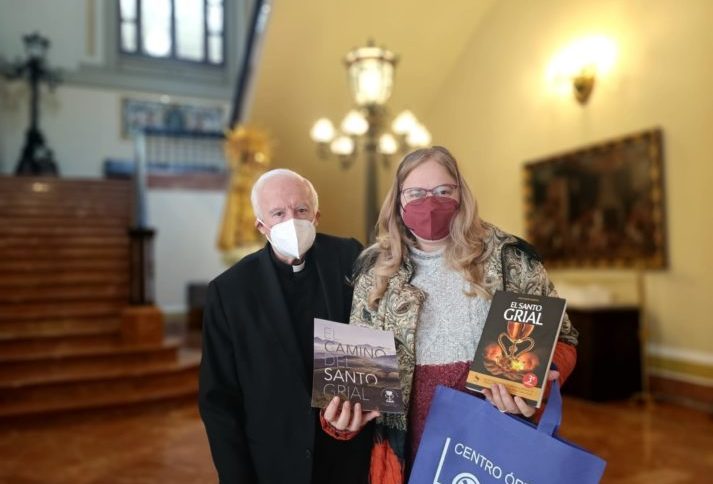 Thanks to the Cardinal Archbishop of Valencia, His Holiness Pope Francis blesses the Way of the Holy Grail

Antonio Cañizares Llovera, until now Cardinal Archbishop of Valencia, served as Prefect of the Congregation for Divine Worship and the Discipline of the Sacraments from 2008 to 2014. Since August 2014 he has served as Archbishop of Valencia and now Enrique Benavent will take his place. He has been vice-president of the Spanish Episcopal Conference for two terms: from 2005 to 2008 and from 2017 to 2020.

With the 20th Anniversary of the Cultural Association The Way of the Holy Grail, Dr. Ana Mafé and the secretary of the same Don Jesús Gimeno, went to visit the Cardinal Archbishop of the Diocese of Valencia, Don Antonio Cañizares to personally supervise the documents that were to be sent to His Holiness Pope Francis, who was requested, through the Vatican, an audience to know about the  Christian route that runs throughout Europe as a  pilgrimage to reach Valencia.

Thanks to the Holy See, specifically to His Holiness Pope Francis, the Cathedral of Valencia since 2015 is a Jubilee year every 5 years in perpetuity for the custody of the Holy Chalice, the cup of blessing with which Our Lord celebrated His Easter supper on Holy Thursday.

Don Antonio Cañizares Llovera, until now Cardinal Archbishop of Valencia gave his permission and approval to the work as an association in the Way of the Holy Grail and the dissemination that is being made of the sacred relic with a Christian commitment.

The reason was to explain to His Holiness the work that has already been done on the Way of the Holy Grail and to give him a copy of the doctoral thesis on the Holy Chalice,  which is the research of Dr. Ana Mafé.

This thesis is developed by the scientific method elaborated to verify the Christian oral tradition about the history of the Holy Relic. It is published by PROQUEST, a prestigious publishing house in the USA. There are only 5 paper copies available in Europe.

On 23 July 2022 the Vatican received the gifts sent by the Association and gave its blessing to Dr. Mafé, President of the Cultural Association The Way of the Holy Grail:

“The Secretariat of State presents its compliments and acknowledges receipt of the gift sent to the Holy Father. It is also grateful for this kind gesture on behalf of His Holiness, who assures us of his remembrance in prayer and imparts the Apostolic Blessing, a pledge of copious divine gifts”.

In addition to this, the Integral Strategic Plan of the Way of the Holy Grail, Route of Knowledge, Way of Peace, was presented to the Spanish religious authorities.

This plan has also been presented to the Spanish Tourism Administration in the September 2021 call through municipalities of Aragon, obtaining the towns of Albentosa (Teruel) and La Sotonera (Huesca) a total of 4 million euros from the European Next Generation funds.

This means that thanks to the path, the “hunger queues” are being worked on, creating employment and dignifying the people who live in the municipalities along the path.

This same plan was presented in March 2021 to His Eminence Antonio Cañizares Llovera, Cardinal Archbishop of Valencia, who encouraged to continue working for the Church from the civil society.

The ceremony took place after the sung celebration of the Pilgrim’s Mass in the Church of San Juan Evangelista in Massamagrell, the municipality where the headquarters of this national Association is located. Don José Ribes explained to the Association how close he has been in recent years to the Holy Chalice of the Cathedral of Valencia, as he had the honour of receiving it in 2016 in Carlet. It is an honour that he has accepted the position with the approval of Cardinal Archbishop Cañizares.