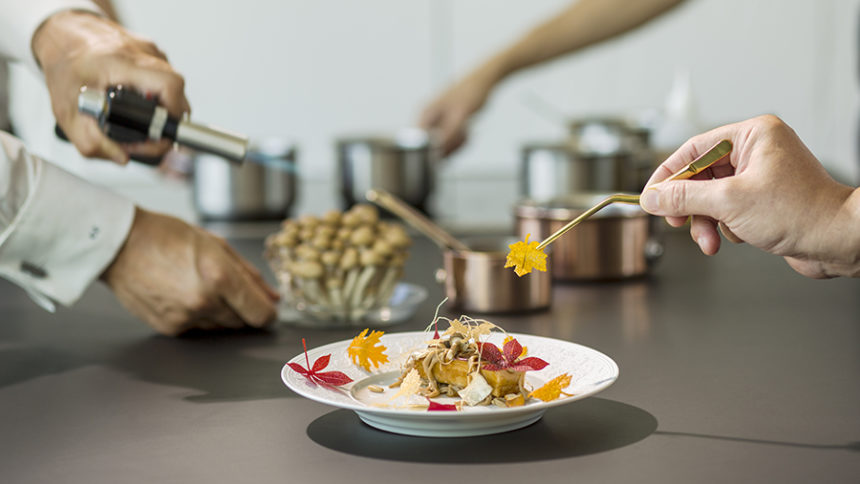 ##24/7 VALENCIA: COUD YOU TELL US MORE ABOUT LEGENDARY CHEF QUIQUE DACOSTA AND HIS NEW VENTURES IN SPAIN?

The renovated Mandarin Oriental Ritz, Madrid will become one of Spain’s most innovative culinary destinations, hosting a total of five gastronomic spaces created and directed by three Michelin-starred chef Quique Dacosta. From today, reservations can already be made through the website mandarinoriental.es to enjoy these creative proposals that will be launched on 15 April after the most important renovation in the history of this hotel.

With the aim of providing extraordinary gastronomic experiences, the five new gastronomic universes will be complemented by the renovated lounges of the centenary hotel, which will once again shine in all their splendour. The Salón Real and Salón Felipe IV, both overlooking the Prado Museum, have been carefully restored to once again host the finest events and family celebrations.

Under the direction of Quique Dacosta, a top level team has joined the hotel: Juan Antonio Medina Gálvez – Head Chef of the Hotel; Ricard Tobella Llerena – Head Chef Deessa; Silvia García Guijarro – Head Sommelier of the Hotel; and Jesús Abia Olmedo – Head Bartender of the Hotel, will be the orchestra conductors together with a team of more than 50 professionals. All of them will work with the rest of the hotel staff to place Mandarin Oriental Ritz, Madrid at the forefront of gastronomy in Spain.

“We are really excited to be in a city as wonderful and at the same time as demanding as Madrid. We have arrived with the ideal partner. Mandarin Oriental has understood our values perfectly and together we have staged this project that we hope Madrid and the world will love”, says Quique Dacosta.

The hotel is committed to having five restaurants with different gastronomic styles.

The blank canvas and epicentre of the creation of Quique Dacosta and Ricard Tobella, head chef at Deessa. Both have started from a Mediterranean soul, with a clear protagonism of the Madrid larder and local produce and from a totally avant-garde perspective. With a different approach to the already well-known universe of Quique Dacosta, which encompasses all facets of the gastronomic experience, from haute cuisine to the dining room. Thus, Deessa will offer two tasting menus: Quique Dacosta Classics Menu, a display of the renowned chef’s most emblematic dishes; and QDRitz Contemporary Menu, a proposal with dishes exclusively designed for this recently inaugurated setting. Deessa will also feature the private lounge, Countess Masslov, named after the name with which the spy Mata-Hari made her reservation at the hotel in 1916 in honour of the maximum intimacy and exclusivity that this space will offer. Finally, a Chef’s Table hidden in the hotel’s kitchens will delight a privileged few who will be able to see, in situ and very punctually, the perfect choreography of the entire kitchen team in action.

And as dreams are sometimes difficult to express in words, this piece by 3D director and designer Carmelo Barberá is a good way to imagine Deessa. We will soon unveil those corresponding to the rest of the gastronomic spaces that will open on 15 April.

It is precisely under the recovered and impressive glass dome, where the most exquisite and characteristic proposal of the Ritz recovers all the prominence. Palm Court, worthy heir to the hotel’s gastronomic tradition, presents a menu that keeps those classic flavours alive while adding modernity, lightness and innovative techniques from the perspective of Quique Dacosta and chef Juan Antonio Medina. In addition, this will once again be the setting for the hotel’s renowned Afternoon Tea, revisited in this new era by Dacosta, but maintaining all the splendour of tradition. Palm Court, in honour of the original space conceived by César Ritz, will once again show off its silverware, being the only hotel that has a department responsible for its perfect maintenance.

Champagne Bar
The dazzling new Champagne Bar will offer the most exclusive experience for champagne lovers. With capacity for only eight guests, guests will be able to pair a bubbly glass with delicacies expressly designed to create the most sophisticated harmonies. In this space, the great French “maisons” will be joined by Spanish sparkling wines, both cavas from all over the peninsula and select Corpinnats.

Pictura
The Pictura bar, backed by a portrait gallery in which well-known Spanish artists and creators have participated, evokes the wall of a museum from a contemporary and updated perspective, in keeping with the cocktail bar proposal: a fusion of dynamism, versatility and classicism with an avant-garde touch. A classic proposal, faithful to impeccable and unforgettable combinations for cocktail lovers, is joined by avant-garde and daring creations that inaugurate a new era in the house mixology. In addition, Jesús Abia and Quique Dacosta have put special effort into creating a disruptive concept: Liquid cuisine. A collection of cocktails created with culinary techniques, such as infusion or low-temperature cooking, whose ingredients maintain a link with the bites designed ad hoc for each one of them, thus achieving the perfect combination. Finally, non-alcoholic cocktails will also take centre stage at Pictura. The Free-Spirits menu will offer original and innovative creations, based on natural products, offering a healthy but equally sophisticated option based on the science of mixology. A more informal version of Mandarin Oriental Ritz, Madrid for a moment of leisure and discovery, with the option to enjoy it on the outdoor terrace.

The Ritz Garden
Open all year round, the coveted Ritz Garden exudes magic, history and elegance. With a spectacular new design, designed to recreate a perfect oasis in the centre of the capital, the Garden will feature a menu designed by Quique Dacosta, with which the chef proposes a journey of flavours and nuances to different cuisines of the world.

A liquid universe
The hotel’s wine cellar deserves a special mention, pampered to the extreme by Silvia García, Head Sommelier. In continuous collaboration with Dacosta, Silvia has designed her own liquid universe for each of the identities of the hotel’s different restaurants and bars, creating alliances with both large houses and small wineries with very careful productions. The result is an extensive and complex wine cellar, to which is added the depth provided by the old vintages, to which special attention has also been paid. Thus, Deessa, the hotel’s emblem, presents a menu with references steeped in history and linked to the winemaking tradition, together with other absolutely avant-garde ones, as well as craft beers. At Palm Court, the profile of palatial cuisine and haute cuisine has been respected in a very detailed selection with nods to Spanish and Madrid references and, at the same time, a wide selection of wine by the glass, in keeping with the space occupied by this restaurant. El Jardín del Ritz, on the other hand, will have a fresher and more casual menu, but no less careful and, above all, very intuitive.

Pâtisserie at Palm Court
The sweet touch could not be missing from Dacosta’s proposal. Under the guidance of Claudia Capuzzo, Mandarin Oriental Ritz, Madrid will offer delicate, ephemeral and harmonious flavours in a menu that is close to the local public, but with a clear international vocation after passing through the sieve of Dacosta’s vision. The chef reinterprets the traditional French pâtisserie, with techniques that play with textures and use just the right amount of sugar to exalt flavours and create sensations, without losing balance. In addition, the hotel will offer its guests a take-away option, a real treat for those with a sweet tooth.

Quique Dacosta
With 3 Michelin stars, he is one of the most creative and renowned chefs in the world. Recently awarded the Gold Medal for Merit in Fine Arts by the Spanish Government, he appeals to territory and art in his inspiration, always with the language of beauty in his discourse.He is the winner of the National Gastronomy Award and Doctor Honoris Causa in Fine Arts from the Miguel Hernández University, as well as championing a movement against hunger in the world, in his role as Ambassador for Action Against Hunger, an NGO in whose projects he has been very involved for six years now. He is also the patron of Restaurants Against Hunger, a campaign focused on the fight against child malnutrition.” 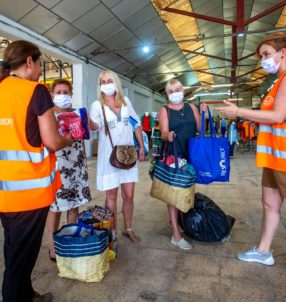 Ayudadesdetumercado: an urgent appeal for aid for Ukrainian refugees