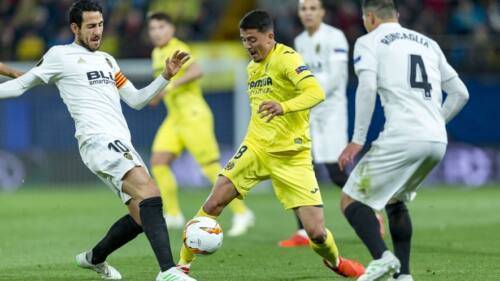 ##When the quarter final draw for the Europa League took place in the municipality of Nyon on the 15th of March there were only two Spanish teams left in the competition, Valencia and Villarreal.

Sevilla had crashed out the night before in spectacular fashion in Prague and the city’s other La Liga club Real Betis had fell at the previous hurdle against Rennes of France.

The two clubs from the Comunidad Valenciana had both overcome Russian clubs to advance to the last eight. Villarreal had run out winners relatively easy over FC Zenit St Petersburg, whilst Valencia had required an injury time equaliser in FC Krasnador to overcome their Eastern European opponents.

Fate decreed that both clubs would meet in the last eight. Villarreal came out of the bowl third and Valencia fourth to ensure the first leg would take place at the Estadio de la Cerámica.

The teams have played each other in a European encounter before back in 2004. Then it was the old UEFA Cup and Valencia just edged the two legged semi-final. A converted Mista penalty in front of the Curva Nord at the Mestalla gave Los Che a single goal lead to take to El Madrigal. The second match ended goalless to earn Valencia a final tie with Marseille in Gothenburg. Mista scored in that game too, along with Vicente, to give the club one of its greatest nights in their football history.

The league game in Villarreal earlier in the season between the two clubs had ended in stalemate in a feisty affair that saw both Parejo sent off and Marcelino banned to the stands for the visitors.

Added spice to the contest was that several of the squad have connections with each club at some time in their careers. Victor Ruiz, Gabriel Paulista and Denis Chéryshev have worn both club colours and Marcelino spent four years in charge of ‘The Yellow Submarine’ between 2013 and 2017.

Juame Doménech was unavailable for Valencia, hospitalized with a severe bout of gastroenteritis, whilst Villarreal’s teenage sensation Samuel Chukwueze was preferred up front to the experienced Carlos Bacca by Javier Calleja. Valencia also had a teenager in their line-up as Ferran Torres was named in front of Chéryshev in the initial starting eleven for Los Che.

Referee Michael Oliver brought the teams onto the pitch and he was flanked by his four assistants, who also hailed from the UK. Amongst them was Andre Marriner and Craig Pawson, regular Premier League officials.

Within six minutes Valencia had already got a precious away goal. It came when Guedes cut back from the by-line inside the penalty area onto his preferred right foot. He was caught clumsily, in the process, by Santiago Cáseres.

Oliver pointed immediately to the spot after confirmation from the assistant referee behind the goal. Parejo, who had missed a spot kick in the last game against Rayo Vallecano, remained Marcelino’s number one choice and took the ball and placed it on the spot.

The Spanish international hit the ball to the right hand side of Andres Fernandez but the Murcia born stopper guessed right and parried the ball back into open play. However, Guedes was the first to react to the save and pounced… to place the ball in the bottom left corner to give the visitors a significant lead.

Immediately on the back foot as a result of the goal, Villarreal responded positively. As the half progressed, Santi Cazorla became more and more dominant in midfield and showed glimpses of the class that has earned him 77 caps for the Spanish National team.

Respected throughout the football world for his efforts on and off the field the “little magician” nearly lost a leg when at Arsenal after a horrific injury that Arsene Wenger described as the worst he had ever seen in football.

Out of the game for over 20 months as a result of an infection that set into the injury, he required skin grafts in several places to patch up his battered leg. The tattoo of his daughter´s name on his forearm is now only half there as the last two letters of her name (India) can be found on his right foot as a result of the skin grafting.

Now back on an even keel, Cazorla still remains one of the best two footed players on the world stage. A free kick that grazed the bar nearly gave the home side a deserved equaliser. A few minutes later they finally got the goal they deserved, as Michael Oliver pointed to the penalty spot for a second time.

Garay’s grappling challenge was judged illegal, giving Cazorla the chance to level the game from 12 yards.  The little Asturian delivered the perfect penalty to give Neto no chance and even the goal tally, with just under ten minutes of the first half remaining.

The final minutes of the first period was all Villarreal as they looked to go into the interval in front. The Valencia defence clung on and half time came with both teams locked in deadlock.

The second half was much of the same as the home side pressed for victory.  Several chances went begging for Villarreal and the young Nigerian Chukwueze was guilty of a particularly poor miss when through one-on-one against Neto, after the youngster had outpaced the Valencia defence and latched onto a through ball. Valencia’s keeper, seemingly misplaced in no man’s land, managed to get his hand to the Nigerian’s intended lob to avert the danger.

A highlight of Valencia’s matches this season has been the amount of goals they have scored late on in the game. Whether this is because of increased fitness levels or the rotation system Marcelino continues to use is anybody’s guess. Undeniably, nineteen goals in the last fifteen minutes of matches tells its own story.

The latest two came in the last minute of normal time and three minutes into injury time at the Estadio de la Cerámica. A swift counterattack by Valencia ended with Daniel Wass scoring with a first time left foot shot and the second came when Guedes was left with just the keeper to beat after a fantastic cross from Chéryshev.

When asked about the late goal syndrome Marcelino said: “When things like this happen, it stops being a coincidence and becomes a virtue.”

The two late goals put Valencia in a strong position to advance into the final four but Villarreal will have nothing to lose by going on all out attack from the start of the game, on Valencia’s home soil.

The winners of the contest will face either Arsenal or Napoli. Arsenal look well placed after their two goals victory over Napoli at the Emirates but both Valencia and Arsenal will be looking no further than their second leg encounters at this moment in time.

First blood goes to Valencia but there is still work to be done.