You are here: Home  /  Sports  /  WHEN VALENCIA CF BEAT NOTTINGHAM FOREST FOR THE EUROPEAN SUPERCUP!
Sports 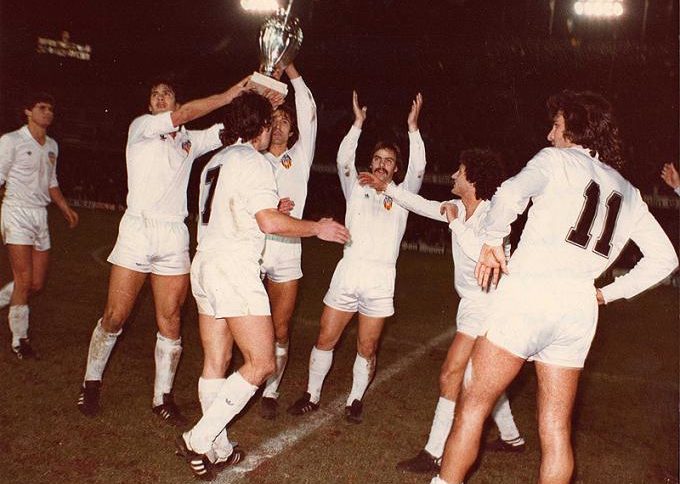 WHEN VALENCIA CF BEAT NOTTINGHAM FOREST FOR THE EUROPEAN SUPERCUP!

This  Saturday on  July 30th in 2022, Valencia CF will be playing a pre-season friendly match in England against Nottingham Forest.

Back in 1980, Valencia CF beat Nottingham Forest over 2 legs to win what was then called the ‘European Super Cup’ (UEFA Super Cup). At the time,  it was  a competition where the winner of the European Cup would play the winner of the Cup Winners’ Cup.

“Whenever we were drawn against an English side, we knew it was going to be difficult. Why? Because of the velocity and precision of English football. We had already played against West Bromwich Albion and Arsenal in European ties and they were impressive sides with demanding managers with clear tactics.”

“Nottingham Forest were one of the best sides I ever faced and I believe they were the best team in England at the time, having won the English League (Premier League) and the ‘European Cup’ (Champions league) twice… and even more titles in that period. They were nearly all British players at Forest in those days, which has its merit.”

“The Valencia CF manager showed his better side in the preparation for this match at the City Ground in Nottingham. He told us in the dressing room: “If we’re going to play possession football against them, let’s see how they are with the ball first…let them hold and pass the ball…and we’ll see if they are nervous today or confident on the ball.” The manager had a lot of respect for Nottingham Forest but he also knew that if the opposite team has more of the ball, you wait until they make a mistake and take advantage…that’s football!”

“However, I believe that Valencia CF played one of our best matches away from home when we played in the first leg against Forest in England. I scored the only goal with a header, which amazes me… given the impressive  ‘monstruos’ (tall & strong) players that they had…and heading the ball was all part of their English game!”

“Nottingham Forest had so much structure and a set system imbedded into their play… that it was difficult to even get crosses into the box! I think the Forest defenders were watching our taller players like Mario Kempes and Rainer Bonhof  in the box during the corner that led to the goal. I’m slightly smaller and the Forest players didn’t seem to notice me in the box… and i headed the ball into the Forest goal at the near post!”

“Despite the fact that Nottingham Forest won the first leg 2-1, I remember the look of bitter dissapointment of the Forest players and the fans at the end of the match. I guess they knew it was too narrow a margin… considering that Valencia CF had the advantage of playing the second leg at Mestalla.”

“That goal in the first leg was one of only two headers I have ever scored and away from home too.  I’m happy that this headed goal contributed, over the 2 legs, to the history of Valencia’s title wins in Europe. In the return game, it was a very different match. It was a fantastic atmosphere with  thousands and thousands of  fans  at Mestalla and Nottingham Forest went out to win and we were warned by the manager that Forest were  experts at set-pieces so we were told  to avoid fouling the opposition in key areas. Fernando Morena  (the Uruguayan) scored a memorable goal for Valencia CF… and we held on to the lead against a really battling Forest side and brought the ‘Super Cup’ to Spanish soil for the first time.”

“We won over the 2 legs on the away goals rule. There was fervour in Mestalla that night. The next day we celebrated the European Supercup with the Valencia fans in the Plaza Ayuntamiento and the Plaza del Virgen, where we paid our respects in the Basilica of Valencia Cathedral, as is the tradition here…”