You are here: Home  /  Food  /  WIKIPAELLA! The ‘Oscars’ for the best rice restaurants in the world…
Food 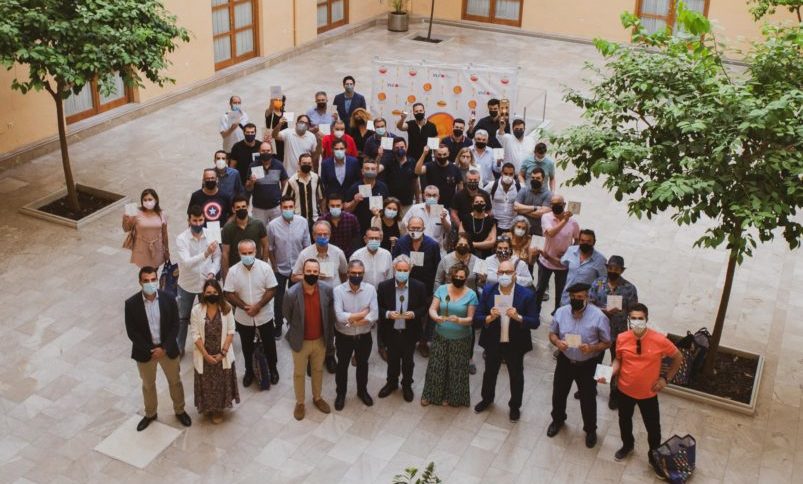 WIKIPAELLA! The ‘Oscars’ for the best rice restaurants in the world…

THE NON-PROFIT ASSOCIATION WIKIPAELLA, PRESENTS THESE AWARDS IN COLLABORATION WITH VISIT VALÈNCIA, AMSTEL AND ARROZ DACSA

The ‘Oscars’ of paella award to the best rice restaurants in the world!

275 restaurants from a dozen countries receive the Wikipaella award, which recognizes their contribution to Valencian rice culture, with paella as the star dish of a culinary identity that, since the 19th century, has crossed borders.

In addition, 60 Spanish and international restaurants won the ‘Cullera de Fusta’, which certifies the use of wood as fuel in cooking, the highest commitment of the hotel and catering industry regarding Valencian gastronomic culture.

The awards for Best Institution, Best Product and Best Chef were also presented. And, as a novelty, the gala has counted with the delivery of the Km0 Awards, a new award of Amstel for locals who work the Valencian paella from the perspective of sustainability.

If there is a ‘star system’ of gastronomy, paella is undoubtedly one of its national and international stars. This June saw the presentation of awards to restaurants around the world, that work in the preservation of this culinary tradition.

275 restaurants received their Wikipaella badge, awarded by the non-profit association of the same name, which organizes these awards with the collaboration of institutions such as the Autonomous Secretariat of Tourism of the Generalitat Valenciana and Visit València, under the Department of Tourism and Internationalization of the City of Valencia. But also from private entities, such as Arroz Dacsa or Amstel, the only major branded brewery with a factory in the Valencian Community, which participates in this initiative given its strong roots in the region and its support for the hotel and catering industry and Valencian gastronomy.

During the Gala, Emiliano García, councilman of Tourism of the City Council of Valencia and president of Visit Valencia, said that “Paella is much more than a recipe linked to rice. For Valencians it represents a moment of union and meeting between families and friends, a space for celebration, a way of living, a way of sharing. It is part of our culture, of our story as a people. The cultivation of rice, the choice of ingredients for the preparation of our most international dish, the craftsmanship of each instrument used and the broad tradition already historical, rooted in our territory and representative of our society, make it more necessary than ever the task to give our paella the national and international recognition it deserves. We have taken many steps in this direction, and today we are especially proud to continue advancing in the declaration of paella as an Asset of Cultural Interest” explained the mayor Emiliano Garcia.

Since 2013, Wikipaella delivers these distinctions that are renewed annually and each year expand its list of recipients. In 2021, 86% come from the Comunitat Valenciana, with 146 restaurateurs installed in València, 33 in Castellón and 62 in Alicante. Although 23 chefs from other parts of Spain have also been distinguished, such as Madrid, Córdoba, Ávila, Jaén, Formentera, Cuenca, Vizcaya or Barcelona, among others. And, at the international level, restaurants from countries such as Colombia, Costa Rica, the United Arab Emirates, the United States, Italy, Mexico and the United Kingdom received 11 awards.

The gala also announced the 60 recipients of the ‘Cullera de Fusta’, a special distinction for those restaurants that promote the culture of paella through the use of wood as fuel in cooking, the highest commitment of the hospitality industry with the Valencian gastronomic culture. In this case, Castellón has received 7 of these awards while 15 have gone to Alicante and Valencia has doubled that…with 30 awards. It should be noted that two other ‘Cullera de Fusta’ have been awarded to national restaurants and 4 to international ones.

All this shows that, even outside our borders, there is an army of chefs working to preserve and promote a cultural and gastronomic heritage, whose first historical references date back to the sixteenth century and which became internationalized from the mid-nineteenth century, thanks to the popularity achieved in the Spanish pavilions in the Universal Exhibitions that were held periodically. Precisely, one of them has taken place in Valencia, in the Palacio de la Exposición, which has hosted this awards ceremony.

The most outstanding novelty of the 2021 edition of the Wikipaella awards is the creation of the ‘Km0 Award’ with the collaboration of Amstel. The aim was to highlight the sustainable nature of traditional Valencian rice dishes, with committment to local, natural and healthy ingredients, often contributing to the survival of foods that could have little trajectory outside these recipes, such as the ‘garrofó’ or the ‘bajoca de careta’, for example.

Javier Prats, Territorial Director HEINEKEN Spain in Levante, and Francisco Ahedo, Executive Events of HEINEKEN Spain, brewing family in which Amstel is included, have highlighted how sustainability is one of the pillars of the company, which works to ‘make beers that the world, people and the planet like’. Amstel is ‘Made in Valencia’, just 14 km from the capital. And, within the company’s global sustainability strategy, these Valencian facilities are at the forefront internationally in aspects such as the care of water sources, highlighting initiatives such as the Cañaveral Project, carried out in collaboration with the Generalitat Valenciana, which annually returns 430 million litres of water to the Albufera thanks to the intervention carried out in the Barranco del Poyo ravine. And the ‘0 waste to landfill’ certification achieved by the Quart de Poblet factory, achieving that 100% of the waste from its production processes is recycled or reused.

Amstel has given the ‘Km0 Award’ to the restaurant Casa Elías, in Monóvar, one of the temples of the traditional rabbit and snails paella in Alicante, which has its own breeding ground for ‘caracoles serranos’ (mountain snails). Farralló has also received it, ‘authentic reference of the Denia shrimp’, whose rice dishes contribute to the economic and cultural dynamism that surrounds this unique variety of seafood. Finally, the third of these Amstel awards went to Descubre L’Horta, a paella workshop in Borbotó, whose organic vegetable garden surrounds the dining room and from which come many of the ingredients that make up their paellas.

THE NINTH EDITION OF ‘THE OSCARS OF PAELLA’ AWARD THE PROCESS INITIATED TO DECLARE THIS DISH AS INTANGIBLE HERITAGE OF HUMANITY.

Each year, the Wikipaella awards gala has three special awards. The award for Best Institution has been ex aequo for the Department of Tourism and Internationalization of the City of Valencia and the Department of Culture and Education of the Generalitat Valenciana for promoting the candidacy of paella as Intangible Heritage of Humanity of Unesco, a distinction already enjoyed by the Fallas, La Lonja de la Seda de València or El Misteri d’Elx. The award was received by the mayor Emiliano García, and the Regional Secretary of Culture, Raquel Tamarit.

The Best Product Award, presented by Désirée Stenderup, Head of Gastronomy at Visit València, went to firewood, an essential element in cooking rice in the traditional style, and was collected by Carles Peris, Secretary General of the Unió de Llauradors i Ramaders, representing the small farmers who collaborate with the hospitality sector, coordinating the collection and distribution after the pruning work. Finally, the award for Best Chef was presented by Lorena Lázaro, Group Brand and Communication Manager of Dacsa, to Paellas Velarte, the century-old take-away food house that has revolutionized the delivery associated with a dish with at least five centuries of history.

The presentation of these awards is the start of a series of activities related to the promotion and dissemination of traditional Valencian cuisine, which will continue with the ‘Paella Week’, to be held from June 17th to June 21st. And that, already after the summer, will culminate with the ‘World Paella Day’, an event to strengthen the internationalization of this emblem of Valencian and Spanish cuisine, which has managed to get its own emoji on our keyboards and a place in the menu of restaurants around the world.