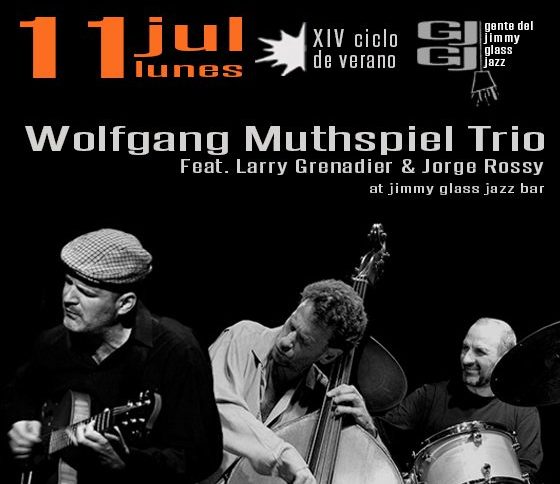 Considered one of the most influential guitarists of his generation, Muthspiel (1965) settled in New York in 1990, where he quickly acquired a great reputation, thanks to his innovative style and great technique, and soon after recorded several albums with musicians such as Don Alias, Grenadier himself, Tom Harrell and Kenny Wollesen.

Since 2013 Muthspiel has been an artist on the renowned ECM label, for which he has recorded four excellent albums, including Rising Grace (ECM Records), a quintet work featuring Brad Mehldau, Ambrose Akinmusire, Brian Blade and Larry Grenadier. The album, which topped many of that year’s best-of lists and earned five stars from DownBeat magazine, spawned numerous sold-out concerts around the world.

Five years later, the quintet recorded Where The River Goes, with Eric Harland on drums, with the same result. Also in 2018, Muthspiel recorded Angular Blues, with Scott Colley and Brian Blade, which was released in 2020.

AN EXCEPTIONAL RHYTHM SECTION
Larry Grenadier and Jorge Rossy’s rhythm section is one of the most important in the world.Larry Grenadier is one of the most intuitive double bass players in jazz according to the New York Times. He has played with Joe Henderson and Stan Getz, with Mehldau’s trio for decades, with Paul Motian and Pat Metheny, co-led the cooperative trio Fly with Mark Turner and Jeff Ballard, the Hudson Quartet with John Scofield, John Medeski and Jack DeJohnette and many, many others. Jorge Rossy is internationally recognised as one of the most influential drummers of his generation. In addition to his own projects, his accompanying work includes over one hundred and eighty recordings with renowned jazz musicians such as the aforementioned Mehldau and Turner, as well as Ethan Iverson, Kevin Hays, Chris Cheek, Seamus Blake, Joshua Redman, Kurt Rosenwinkel, Jakob Bro, Enrico Pieranunzi and Steve Swallow, among many others. Rossy has also toured with jazz greats including Charlie Haden, Wayne Shorter, Lee Konitz, Carla Bley and Joe Lovano.Unquestionably, one of the most attractive trios in contemporary jazz. Top level jazz…

BOOKINGS: reservasjimmyglass@gmail.com
(indicating name, number of bookings, date and name of the concert)

JIMMY GLASS
C/ Baja, 28
46003
Valencia
Spain
22€ one set / 30€ the two sets
RESERVATIONS: reservasjimmyglass@gmail.com
(Indicating the name, number of reservations, date and name of the concert and for which of the two passes reservation is requested or if it is for both passes)
https://www.facebook.com/JimmyGlassJazzBar
https://www.jimmyglassjazz.net/