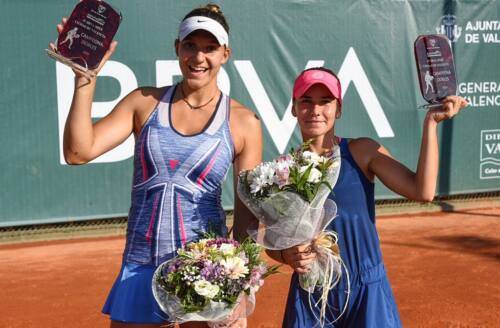 International sport was once again back in Valencia last month when professional female stars from the tennis world converged on the city to compete in the BBVA Open Ciudad de Tenis 60,000 + Hotel event. Fast becoming one of the most prestigious tournaments on the European circuit, it boasts three years of continued progress and this fourth edition proved to be the most competitive on court and innovative off court yet. The tournament itself is encompassed by peripheral events during the week, which undoubtedly add to the effectiveness of it all. Highlights this time round were the sound tennis exhibition for the visually impaired, E-sports tennis, and a wonderful under 16 competition for eight of the best Spanish ranked girls in the country. Another, one of the keys to its success is undoubtedly the venue itself. Nestling in the historic barrio of Benimaclet, right next to the Jardines del Real, it is in walking distance to the centre of the city itself. However, it is still a tranquil enough setting to create an oasis for tennis fans to lose themselves in as time stands still.

The first and second days were mainly qualifying phases for the singles earning the right for the progressers to make headway into the main draw of 32. The final round of the qualifying draw had some of the best matches of the competition with five out of the eight matches going to the Super Tie break (first player to ten points in the third set).

The main draw had last year´s finalist Aliona Bolsova tagged the number one seed. The 22 year old from Moldovia, now plays under the Spanish flag and is currently ranked number 91 in the world. She has made continued improvement since her visit to Valencia last year and claimed her best grand slam result earlier this summer when she reached the last 16 of the French Open at Roland Garros before being eliminated by the eventual semi-finalist Amanda Anisomova of the United States.

Arguably, the biggest draw of the tournament and the player the fans flocked to see was the Italian Sara Errani. The 32 year old from Bologna was given a wildcard entry and is well known to Valencia tennis fans, having worked with the local coach Pablo Lozano for many years during the most successful period of her career.

Ranked as high as number five in the singles and number one in the doubles, she is trying to re-establish herself amongst the tennis elite after recently completing an enforced ban of ten months for falling foul of the stringent doping controls of the ITF.

Errani strongly denies any wrong doing and, with the backing of the Italian Tennis Federation, she returned to Valencia and Lozano recently… to help her get through this dark period in her life.

Lozano, who runs a tennis academy jointly with Jose Altur at the Club Deportivo Saladar in Silla boasts Marat Safin, David Ferrer, Dinara Safina and Igor Andreev as pupils whom he has coached in the past.

Of Errani he has said…

“From the first moment I saw her, I knew she had something special. She was very competitive and intelligent. But she was not very skilful, wasn´t very big physically nor had impressive shots; but I realized that, with hard work and developing her mental skills on court, she could play very well”…

Unfortunately, Errani struggled throughout the week and was knocked out in the second round by the ever improving Marta Kostyuk of the Ukraine, in straight sets. It was not to be for Bolsova either, who also faltered in the second round, losing out to the Romanian Irina Bara, who was the 2017 champion of this event.

Both Bara and Kostyuk made it through to the semi-finals were the both ended up easily beaten by Varvara Gracheva and Tamara Korpatsch respectively.

Gracheva is definitely a player on the rise and her current ranking of 215 in the world is sure to move in the right direction substantially after she won the 60,000 tournament in St. Malo, France the week before coming to Southern Spain.

Standing in the way of back-to-back victories was Tamara Korpatsch of Germany. The Hamburg born native, who won the German National championships in 2017, is currently ranked 73 places above her opponent but on the baking clay court the rankings counted for nothing.

Korpatsch won the toss and elected to serve at the beginning of the match. There was very little between the two players’ ground strokes or baseline rallies but the German’s use of the drop shot gained the number three seed valuable points at crucial times. She gradually took control of the first set and eventually won it, with relative ease, by six games to three.

The second set started with both players failing to hold serve in the first two games. A hold of serve by Gracheva and then a break for the Russian when Korpastch double faulted gave the Moscovite a 3-1 lead.  That was short lasted as the German broke back immediately, to leave the set delicately poised at 3-2.

Game six was arguably the most pivotal of the game as the Russian once again broke the German, but in controversial circumstances. Korpatsch, quite clearly thought a cross court drive from Gracheva had been over hit but the line judge and referee felt otherwise. Remonstrations that resulted in a conduct warning fell on deaf ears and Gracheva had another break to her name on the scoreboard. She did not need a second invitation to see out the set and she peeled off the next two games without any issue to level the match and take it into a deciding full set.

Increasingly frustrated, Korpatsch failed to get her focus back on the job at hand and the Russian rattled off six games in a row to record a 3-6, 6-2, 6-0 victory and back-to -back wins in St. Malo and Valencia.

The doubles event was played in excellent spirit throughout the week and the final two pairings from the starting sixteen were interestingly players from four differing countries, and three different continents.

The Australian/Venezuelan partnership of Seone Mendez and Andrea Gamiz took on the Romanian/Spanish outfit of Irina Bara and Rebeka Masarova.

Bara looked fresh, despite playing her single semi-finals just a couple of hours before and in Masarova she had a perfect foil. Masarova is an interesting case, having a Slovakian father and Spanish mother, she was born in Basel, Switzerland and at the tender age of 20 she has represented all three countries at international level. She won the French Open Junior Title in 2016 and was a finalist in the Australian Junior Open the following year.

Tipped by many for a bright future in the sport, she was the catalyst for getting her partnership off to a winning start with a close 6-4 score in set one.

Mendez and Gamiz tried valiantly to get on level terms in the second set but, unfortunately for them, they ran out of steam in the tie break,  only mustering two points in the deciding encounter to give Masarova and Bara a straight sets victory of 6-4, 7-6 (2).

The winners of both events received a wonderful tennis statue made by Lladro as well as their winning cheques. Once again, the speeches from the players when receiving their prizes spoke highly of the organization and the attention to detail that the tournament brings, and without doubt many players consider this one of their favourite events on the whole ITF tour.

Club de Tenis Valencia will now start preparing for the 2020 edition of the tournament, in the hope of bringing the city another fantastic spectacle next year. With over 40,000 visitors in the first three years and substantial ticket sales this year the event is now firmly entrenched on the ITF calendar, as one of the best, and most enjoyable of its category. With its current trend, it will only continue to grow and attract players of the highest calibre next year.