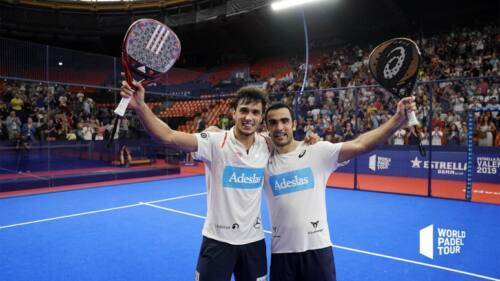 ##RACKET SPORTS ARE ALL THE RAGE AT THE MOMENT

As Wimbledon wows the tennis fraternity with its strawberries and cream, conservative traditions and iconic grass courts, Valencia concurrently hosts its very own major racket event by holding the latest stage of the World Padel Tour.

Padel is one of the fastest growing sports in Europe and is finally becoming recognised in England, not least because of the feedback generated by the expat community that have experienced the sport first hand here, along the Valencia coastline.

It is a sport that is almost predominantly played in a doubles format on a closed court, somewhat similar but smaller to that of tennis. The court itself is surrounded by glass walls, allowing the ball to be kept in play in a way that is comparable to squash.

Sant Luis Pavillion, the atmospheric home of Valencia Basketball, was converted for the duration of the tournament into a padel court. 96 male and 56 female participants started on the journey with the majority of the qualifying matches played at the padel club in Alfafar.

By the time the semi-final stages came around, the audiences had swelled to near capacity. The number one seeds in the male draw, Sanchez and Gutiérrez, had already been knocked out by Tapia and Gadea.

The established pair of “Paquito” Navarro and “The Wolf” Juan Lebrón matched up with the infant partnership of Alejandro Galán and Pablo Lima in the first semi-final. Lebrón was threatened with two break points on his serve in the opening game but managed to save them with ease. He and his partner Navarro then raced into a 5-0 lead. Galan held the sixth game to 30 but it only delayed the inevitable slightly as Navarro held his serve to love, to give the first set easily to the number two seeds.

The second set was the pivotal one of the match. Lima and Galán raced into a 3-0 lead but were pegged back to 3-3.  Galán and Navarro both had their serves broken in back-to-back games and then games went with serve to 6-5 to the Lima/Galán partnership. The twelfth game saw Navarro broken again as Galán won the set with one of his signature smashes. The World number 7 from Madrid jumps like a gazelle and has a touch of the Ronaldo about him, even to the point that he hitches up his shorts during points in the same way the Juventus ace does before embarking on a free kick.

With Galán in irresistible form and his partner, the left-handed Lima looking at his most solid in the game, the third set was a one sided affair. Galán won it on his serve in the seventh game on the third match point to confirm a 1-6,7-5,6-1 victory in just under two hours.

The second semi-final between Agustin Silingo/Adrian Allemandi and Nacho Gadea/Agustin Tapia was not as closely contested as the first one. Gadea and Tapia could not emulate their exploits that saw them knock out the number one seeds in the earlier rounds and Silingo and Allemandi were in complete control from the first point to the last. They spent little time and effort in disposing of their counterparts 6-2, 6-3.

The Men’s final was a fantastic advert for the game of padel. Two hours and 54 minutes of sublime racket skills that had it all. Smashes, volleys, lobs and even winners secured from off court.

Set two was equally close and both partnerships went toe-to-toe before a simple volley into the net by Silingo gave Galan and Lima the set 7-5, to level the match.

The final set went with serve for the fist six games. With all players beginning to tire, it was a question of who was the fittest. Allemandi was noticeably struggling and straining for breath at the end of every point and it was no surprise when Galán and Lima peeled off three straight games to give them the Championship here in Valencia 6-7, 7-5, 6-3.

The Women’s event had a familiar look about it. The partnerships of Alejandra Salazar/Ariana Sánchez and Marta Ortega/Marta Marrero had met in the final in Valladolid the month before, when the Alejandra/Ariana team had emerged victorious 6-4 in the final set.

The two Marta’s (Marrero number one in the world and Ortego number three in the world) were looking for revenge and they looked more focused throughout the final, as they took the first set easily 6-3.

Salazar (number 2 in the world) and Sanchez (number 5 in the world) tried to find some rhythm in the second set but a cluster of unforced errors on critical points ensured any comeback was in vain.

The two Martas eventually won the second set as comprehensively as the first to take a 6-3, 6-2 victory and become champions of Valencia.

Both the male and female tournaments throughout the event offered matches of high quality and the wonderful Font Sant Luis was a fantastic backdrop for this sport that continues to grow and capture the imagination of sporting individuals.

Currently, the top 25 in the World from both genders are from Spain, Argentina, Portugal or Brazil. The way the sport is developing and spreading like wildfire it hopefully will not be long before other countries start to pierce the domination of these four nations.

Who knows, within two years we may see a British player on the circuit and challenging for honours in Valencia on the World Padel tour. One thing is for sure, the sport is here to stay and courts will continue to spring up with more regularity in the UK before too long.

The David Lloyd Group already have some padel courts on their sites and you can expect the 80 or so courts available now in the UK to double or treble in the next few years as tennis and squash clubs make space for padel on their complexes.

Racket sports are indeed all the rage at the moment, and padel wants to add to that momentum. The fact that the UK lawn tennis federation have integrated padel into its operations shows the sport’s intentions and this greater exposure and opportunity can only increase the popularity of the sport.

Watch out Wimbledon, the World Padel Tour is coming.