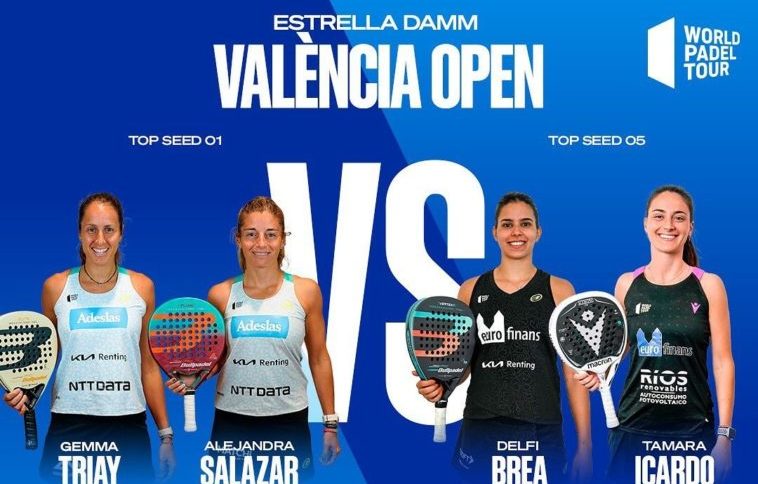 Historically, Tennis & Squash & Badminton have been the favoured racquet sports of many. However, in the past few years, padel has spread like wildfire, to sit side by side in popularity with its more traditional neighbours. Indeed, throughout Europe, tennis courts are being replaced with padel facilities, and it seems the sport has captured the imagination of all ages. Evidence of the growth of the sport can be seen by comparing the World Padel calendar of last year and the one in 2022.

In 2021 six countries (Spain, Portugal, Argentina, Mexico, Sweden and Italy) hosted recognized events, whilst this year a further seven countries (USA, Belgium, Denmark, Austria, France, Holland and a country in the Middle East) will host either a male, female or combined tournament.

The Valencia World series once again shares the racquet limelight with Wimbledon, with the progress of Rafa Nadal followed on silenced mobile phones during match breaks on centre court at the iconic Pavelló Municipal Font de Sant Lluis, which is normally the backdrop of the Valencia Basketball club.Incidentally, this venue will be used in mid-September for the Davis Cup, and Spain’s group stage matches between Canada, Serbia and South Korea.

The qualifying stages for this year’s World series in Valencia took place in Benimaclet at the Pabellón Deportivo Universitat de València. 96 men and 60 women qualified for the tournament with the top seeds not entering the competition until the last 32, or in some cases, the last 16 of the event.

The first upset came in the men’s, when the runners up of the 2020 World Series in Valencia, and fifth seeds, Federico Chingotto and Juan Tello bowed out of the competition at the “dieciseisavos” stage on a third set tie break to José Rico Dasi and Agustín Gutiérrez.

The number sixth seeds, Arturo Coello and Fernando Belasteguín nearly suffered a similar fate in the same round, but edged through on a third set victory (7-5) over Jon Sanz and the evergreen Miguel Lamperti, who turns 44 in November. It was a heart-breaking loss for Sanz and Lamperti, who had been 5-1 to the good, and two points from victory in the final set.

The early stages of the Women’s event went pretty much to form, and by the quarter-final stage only the two lowest seeded pairs had not advanced to their expected position.

The seedings also continued to prove pretty correct at the quarter-final stage, with three of the four expected semi-finalists in the female category reaching their predicted places.

The men’s event at the quarter-final stage saw the top three seeds surge into the next round with either straight set victories, or as a result of a retirement in the case of the third seeds Agustin Tapia and Daniel Gutiérrez.

In their match, Valencia born Josete Rico’s dreams of winning his local tournament with his partner Agustín Gutiérrez were shattered when he had to retire halfway through the second set.

The only upset at this stage in the men’s came with the number four seeds Pablo Lima and Franco Stupaczuk yielding to the number eight seeds Maximillio Sanchéz and Luciano Capra.

The semi-finals saw both number one seeds see off their opponents in straight sets in both categories. The number two seeds were not so fortunate and fell to their opponents.

The ladies match between Valencia’s very own Tamara Icardo and Delfina Brea and Alejandra Sanchez and Paula Josemaria started with a golden point in the first game with Josemaria holding onto her serve.

Icardo and Brea then won six out of the next seven games to take the set 6-2. The second set was won by the same score, but this time by Sanchez and her partner.

The deciding set started with the first two games going to serve. Game three saw Delfina and Tamara break on the golden point, only for their opponents to immediately break Brea’s serve to make the score two-two.

The next two games the servers held, although it took a golden point in game six to keep the scores level. As is often the case in racquet sports, game seven was pivotal. Another golden point saw Paula smash into the net to give her opponents a 4-3 advantage. However, the inability to hold serve in this final set continued and the Spanish pair clawed the set back to 4-4 on another golden point.

Josemaria served next, and her inconsistency of blowing hot and cold in this particular match was highlighted as fantastic defence led to errors, that gave Icardo and Brea a chance to serve for the match.

Fittingly, it was the local star who managed to hold onto her serve, and after two hours and 38 minutes, they were through to a final encounter with Gemma Triay and Alejandra Salazar.

The other men’s semi-final was equally enthralling with the number three seeds Tapia and Gutiérrez taking out their higher ranking counterparts in three sets.

The game started with the Argentinians racing into a 4-1 lead. Three games later Navarro and Di Nenno had levelled the score. With the score at 5-5, game 11 proved important as Tapia and Gutiérrez took it on a golden point. They then went on to break Navarro’s serve to secure the first set 7-5.

Set two was also a set of fine margins. The first ten games went with serve despite a couple of golden point opportunities for both pairs. Game 11 saw Tapia’s serve broken at the third point of asking, and then the Spaniard Navarro made no mistake in seeing out the set, to restore parity in the match.

Set three started similar to the previous set… with the first seven games going with serve. This run was ended when Navarro had his serve broken to give Daniel Gutiérrez the opportunity to win the match. The first two points saw Tapia split the defence of Navarro and Di Nenno down the middle of the court with two rasping shots, and then a smash that had the power to go out of court by Tapia gave the Argentinians three match points. They converted after the third attempt to win the clash 7-5, 5-7, 6-3 after just over two and a half hours.

Finals day saw a big swell of numbers in the crowd as the four sides of the court were full with spectators. The 10 am start brought the women’s final on court, and huge support for the local girl Tamara Icardo and her Buenos Aries born partner Delfina Brea.

Icardo is a University of Valencia graduate, and is just returning back to the padel scene after a recurring injury.

Having won the tournament last year with Brea, against the same opponents, she was super keen to repeat the feat but she herself conceded that she was only 80% recovered from her injury problems. “I am giving 100% of my 80% and concentrating on enjoying myself”.

Being the first Valencian born women to play for the Spanish National team at padel, being awarded recently the prize for Sporting merit by the city council, and wanting to retain the World Series Valencia Padel title were serious incentives for Icardo and Brea.

The match lasted over three and a half hours and it needed a tie-break of epic proportions to determine the winner.

A constant theme in the first set was the inability of both partnerships to hold onto their serves against world class defence. Seven out of the first ten games went the way of the receivers as Triay and Salazar won the set 6-4.

Set two saw the Spanish/Argentine duo start well, by breaking the serve of Salazar, who hails from Madrid. Icardo then held her serve to love, before the Gran Canarian Gemma Triay also won her serve to same scoreline.

A golden ball victory for Tamara and Delfina made the score 3-1 before the all-Spanish pair rolled off the next two games to make the scores level again.  A break of Gemma’s serve in game seven gave the European/South America duo another opening, and they made no mistake in closing out the set 6-4 to put the teams on equal terms.

The final set was a humdinger with the outcome precariously balanced. Unsurprisingly, it went to a tie break. Both teams had match points during the ultimate game, but the winning trophy ended up with the World Number One ranked players Triay and Salazar, who closed out the tie-break by nine points to seven.

The men’s final also took three sets to find the champions. The match was set up nicely for the contrast in styles, the power game of Lebron and Galan, against the subtleties of Tapia and Daniel Gutiérrez. It was a sluggish start by the Argentinian pair, as Lebrón and Galan took the first set 6-2 in 35 minutes.

Set two was a much closer affair with Tapia and Gutiérrez beginning to get a foothold in the match. However, they still found themselves 5-4 and love thirty down before winning game 10. They then won the next two games, the latter on a golden point, to square the contest at one set apiece.

The final set saw the fulcrum finally swing the way of Tapia and Gutiérrez. Unlike the women’s final, both teams were struggling to find a way to penetrate the serve of their opponents.

The first nine games went with serve, leaving Galan to hold on to his to extend the match. Two loose shots by the Spanish pair put them in real trouble.

A rally back to 30-30 gave them renewed hope, but this was immediately repelled and when Lebrón put an easy return into the net two points later… the trophy belonged to the Argentinians.

The Valencia World series is over for another year as the tour now heads to Malaga later this month. Those fortunate to witness the two finals will remember them well into the summer, and as the popularity of the sport continues to rise, the city dignitaries must do all they can to make sure the event and date remains a permanent fixture of the world padel calendar for as long as possible.