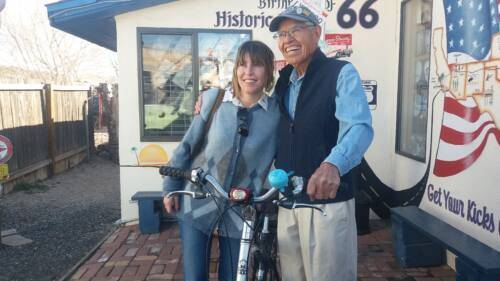 ##24/7 Valencia: Tell us about something about your upbringing and education…

Ana Ramón Rubio: I studied in an American school so I always felt very identified & attracted to American culture. We had talent-shows, we did trick-or-treating in Halloween, we celebrated ‘Thanksgiving’ and did all those other things that we usually see in the movies and may seem distant to most Spanish students. So, I think that’s one of the reasons why I always had a special interest in Americana and even more so on ‘Route 66’ because I had read about it in books, or seen it in movies or heard about it from songs…

Even though my parents have nothing to do with the business side of entertainment, they always took my brother and I to the movies and to music concerts or to the theatre. They wanted us to be interested in arts, books, films… and I think that is where everything started. When I was a little girl I wanted to be a writer, I wanted to write novels but then I started falling in love with movies and Television series. I was always interested in where the camera was placed and in the narrative of the stories. So I started shooting very bad short films that I never finished, with a handycam, until I decided to study audiovisual communication in college.

Tell us the story of ‘Almost Ghosts.’

Almost Ghosts is a documentary film about (almost) ghost towns of Route 66 and the American survivors who live there. I once drove the first stretch, from Chicago to Saint Louis, on a road trip to New Orleans. I got the impression that the Mother Road was very different from what we always saw in TV shows, especially because of the depopulation and the abandonment of some of the towns, mainly the smaller ones.

When Eisenhower started building interstates and quicker highways, there were thousands of towns that had always made their living from the traffic of Route 66 that died and a lot of people started fighting to halt its decline. Route 66 was something that had always been so iconic and it was suddenly so human for me. Since then it started to awaken my interest as a documentary subject, because of the intimate stories all along it. In fact it is a film about people, not so much a film about Route 66. Angel Delgadillo, Harley Russell and Lowell Davis are the main characters of the film and all of the story is told with their voice, with their experiences and with their day-to-day existence.

How did you find living and working on Route 66?

Shooting on Route 66 was an adventure. There are roads that are suddenly cut short and one day it is hot as hell and the next day it is snowing in Missouri. The drive is 4.000 kilometres through States that are so different from each other like California, Texas or Arizona. For travellers, it really is an amazing experience. It is an initiation trip in search of American culture, the American way, the USA from East to West. But for those who live there, things have been really tough during the 80s & 90s.There is some economic rebound thanks to tourism, but there is still lots of commerce that is closing down every year and lots of historic buildings that are completely abandoned…

What was your impression of the people who have chosen to still live there?

Our main characters have very different lives. Harley Russell, for example, receives thousands of visitors every season. He has a very irreverent music show in his place in Erick (Oklahoma) and at the same time you can find Lowell Davis just enjoying his pipe in the porch of his house in Red Oak II (Missouri) or Angel Delgadillo who has become a local hero in Arizona for his work to make Route 66 historic.

But the Route 66 community is mostly people that want to be authentic and that enjoy living outside the bigger cities and the big technological changes. There is a really great community all along the 4.000 kilometres of Route 66. Each state has their own Association and they all work together to preserve the road. The inhabitants of towns of Oklahoma know the ones from Texas and vice versa, they try to be a community, and in the towns, people look out for each other, everybody knows everybody… I think it’s mostly people that enjoy living a slow life.

Could you tell us something about your other work?

I started in the web series industry when it wasn’t even an industry, because I wanted to feel the taste of telling stories and really didn’t have the budget to do it. We did a crowdfunding and shot ‘Sin Vida Propia’, which travelled to a lot of web series festivals in the US. Then I wrote and directed ‘We all wanted to kill the president’, a comic thriller that was released on Amazon Prime Video, short films, the Valencian TV series ‘La Vall’, which was the first narrative series of the new Valencian public television (À Punt Media) with Valencian filmmaker Pau Martínez. And now I’m developing the script of a documentary, which is very related to Valencian and the British culture and that hopefully will be filmed this year.

What were the challenges that you faced when making ‘Almost Ghosts’?

The sheer distance was a real challenge. It’s not so easy to organize a shooting in towns and cities where you have never been before and when you are 10.000 kilometres away. Then the funding was also a challenge, and the language, and the fact of driving across the US with a very tight schedule to arrive on time for the interviews, the locations, etc. And once it was finished, the challenge of distributing it, because documentary films are in a very good place right now but the public still isn’t so used to go to the theatre to watch them. It has been one challenge after another but that makes the process a lot more fun!

Does Valencia have a bright future in the audiovisual world?

There’s a lot of talent in Valencia with people that tell great stories, not only in film but also in the documentary genre. The main issue, as happens everywhere, is the funding.  However, in recent years you can feel the positive work that has been done via public administration.  That’s why we are starting to create an industry that in the future could have an identity such as what has already happened with  Catalan or Basque cinema. We are not there yet, but there’s work being done and there is this atmosphere of creativity and optimism that is helping to improve the situation. In recent years, there have been some films made in Valencia that are amazing. “La Estrategia del Silencio”, for example, is one of the best documentary films ever made in Spain and was set and produced here in Valencia. In 2019 there was the debut film, “La Inocencia” that was shot in the Castellon region and the short film ‘9 Pasos’ is one of the most awarded short films in the world. There is a real effort being made here combined with local talent and what we have to do is to keep working in the same direction to really create a proper audiovisual industry in Valencia. 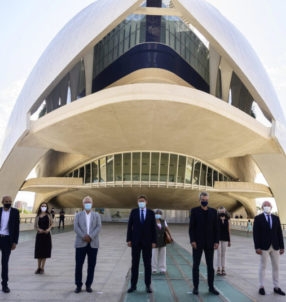