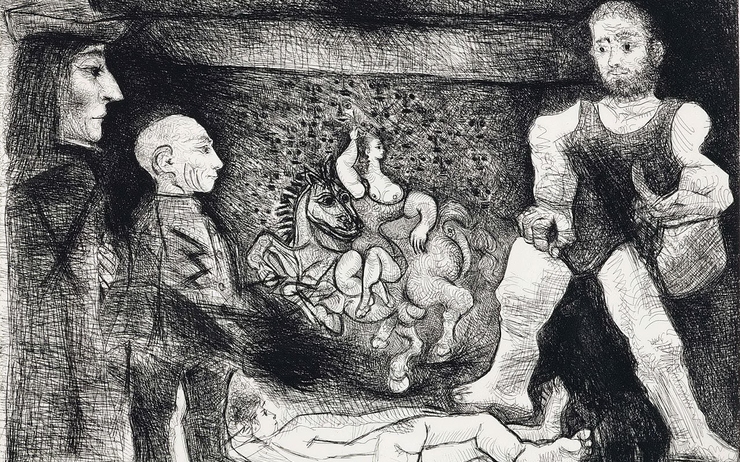 ##24/7 VALENCIA: Could you tell us more about this new exhibition?

FUNDACIÓN BANCAJA: “On Wednesday 31 March, Fundación Bancaja presented the exhibition Goya in the eyes of Picasso, an exhibition organised with the participation of Fundación Ibercaja that focuses on the presence of Francisco de Goya’s legacy in the production of Pablo Picasso through the facet as engravers of these two creators. The assembly process has already begun in the Fundación Bancaja hall with the reception and unpacking of the works.

The exhibition, curated by Lola Durán Úcar, PhD in Art History and Visual Culture, consists of a selection of more than 200 works, mostly engravings, which together with paintings, photographs and audiovisuals compare the work of these two universal names in the history of art and explore the influence that Goya’s ideas had on the production of the Malaga-born artist throughout his life.

The exhibition is organised into four sections: Mirada de juventud, which brings together the Malaga-born artist’s earliest production already inspired by Goya’s work; El sueño de la razón produce monstruos, in which engravings by Goya in his mature stage coexist with Picasso’s graphic work from the early 1930s; La Tauromaquia como fiesta, a space with the bullfight as the protagonist, a passion shared by both artists; and Goya en los textos de Picasso, which shows the extent of Goya’s impact on Picasso’s work even in texts and poems from the 1950s.

This new perspective on the work of both artists takes place in the year that marks the 275th anniversary of the birth of Francisco de Goya. The exhibition has been made possible thanks to the collaboration of Museo Goya. Colección Ibercaja-Museo Camón Aznar, the Museu Picasso de Barcelona and the Real Academia de Bellas Artes de San Fernando, which have lent works to this exhibition, in addition to those from the artistic heritage of the Fundación Bancaja, which has one of the most extensive collections of graphic works by the painter from Malaga and which offers the opportunity in this project to see some previously unpublished pieces.”

Tickets on sale at the box office (Plaza Tetuán, 23). Each ticket gives access to all the exhibitions currently on show at the Fundación Bancaja.