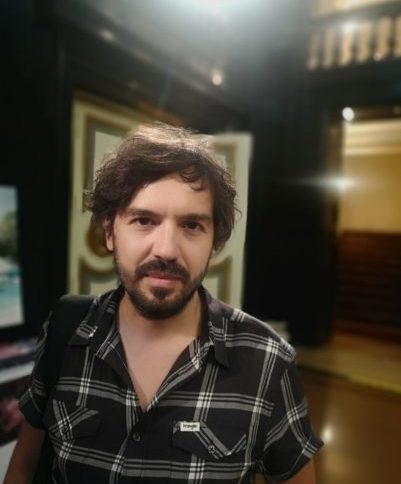 24/7 VALENCIA: Can you tell us something about your background and education at Film School in Athens?

MICHALIS KONSTANTATOS: I studied sociology at the Panteion University of Athens and then attended a postgraduate programme in the department of architecture of the National Technical University of Athens. At the same time, I was studying film-directing in Athens. During my studies, I started working in cinema. Since then I have been directing films for the cinema, theatrical performances, art projects and various others for television and advertising.

Directing from the very beginning proved to be what I always wanted to do the most, professionally-speaking. Sociology and architecture were sciences I wanted to study in my quest to acquire the knowledge to understand the world. In the end, I think that this composition of those three areas, shaped in a way and, to a certain degree as well, my cinematic identity.

Does having a degree in sociology influence the way you look at societies in your films?
The effect of my studies, whether I choose it or not, certainly exists as a way of thinking. My need to study sociology was born out of my innate interest in people, their psychology and their need to coexist… creating societies. There is a landscape of varied and complex behaviors that I am particularly interested in, analyzing them, and this has always been a source of inspiration for my films.

Has studying architecture been an influence on your filmmaking, in terms of structure and style?
The space usually works as another character in my movies. Human behaviour is influenced and often co-formed by the space, the place where people communicate and exist. This is the dimension where architecture meets my cinema. The space and the way it occupies the respective landscape, the buildings and their architecture coexist with my characters, defining each time a frame which expresses the psychology of my heroes. I make sure that each frame is made with specific detail and conscientiously too. Equally, I am interested very much in the unfolding of real time. Sometimes when you let things happen and breathe, when you are not put in a hurry, another dimension is revealed to you. New perspectives. As also happens in human relationships.

Tell us more about your televison work and short films…
When I started directing, like most directors, I made some short films. ‘Only forever’ and ‘Twice now’. I was interested in the short films mostly as a way to convey a feeling, as an act that implies and provokes a thought or a conversation about their subject. This is sort of a way to characterize both of the short-films films that I directed.

My job in television started purely for economic reasons. I have been involved in many different things, from cultural shows and fiction series to Television commercials. TV has changed over the years. Today, through various platforms, directors are given the opportunity to do quality work that flirts with the cinema. Of course, because we are always talking about a medium that its product is for mass-consumption, it will never have the “freedom” that cinema gives to a creator. Nevertheless, very good work is being done and I am happy when I am given the opportunity to contribute to this as well.

What was your first feature film ‘Luton’ about?
‘Luton’ is a film about hidden violence that exists in our daily lives. Through the story of three different people (united by something unexpected), it talks about the pathogenesis of indifference and prosperity. It talks also about behaviours that seem “normal” which secretly give birth to “monsters”. As long as we do not face the truth, violence will always be there. As long as we tolerate things we do not like, as long as we do not use our vote, our voice for the common good, as long as we do not respect the people close to us, as long as we let our personal relationships wear out, violence will be there to release the pressure and to create even more violence. This is the most powerful form of violence, which is hidden very well and cannot easily be identified as such. Whatever we have been taught at schools, it is being reproduced in our families. There are no innocent ones regarding the issue of violence. We know what it is, we know why it is produced, we have an idea of how it can be avoided, and so what finally happens shouldn’t be excused or allowed to happen in any way.

‘All the Pretty Little Horses’ was screened at Cinema Jove film festival of Valencia. What were your aims and objectives with this piece? Is it a critique of Mediterranean culture?
The movie ‘All the Pretty Little Horses’ refers to two people who created and built their lives in a bubble of prosperity. When this bubble finally bursts, they suddenly fimd themselves without their financial and social status, without their professional capacity and finally without a personal identity. Without knowing what their role really is as individuals, as parents, as a couple. The reason for the film in the first place was the deep economic crisis in Greece, which brought not only fiscal changes but also major changes in social structures and interpersonal relations.

But through the “journey” that the characters of the film go through, I feel that they finally find in each other a particular quality that can “wake up” and unite two people, against our present times where human behaviour is increasingly flowing in a very individualistic mode.

So, the film is about this very moment which follows emotionally the violent financial restructuring. What does it mean to lose your social identity? How do we really manage such a violent change? And what impact does it have on a person’s psychology? In the film, my intention is to focus on the psychology of the heroes and to see how in such an environment of violent change, their relationship and behaviour are reshaped. The lack of contact in such conditions usually grows bigger. People talk to each other less and less honestly, while thoughts and assumptions often become more real than reality itself. The heroes of my film stay naked in front of each other but with a disposition to hide and conceal the truth by not admitting it. And that’s where the problem begins. When, in the face of the pain and the cost that the truth can have, we hide somewhere between the distance we create even with the people closest to us.

What was your impression of Valencia at the ‘Cinema Jove’ Film Festival?
It was the first time I visited the city and I confess that I left with the best of impressions. It is a very beautiful city, which at least for someone who visits it gives the impression that it respects its inhabitants.

Any future projects in the pipeline?
I am currently writing the script for my new film, planning my next theatrical performance with my colleague and directing a series of fiction for television. I hope that after a year that all the creative plans all over the world were stopped due to the pandemic, we will find a new regularity where we can plan, work and create without any more restrictions. 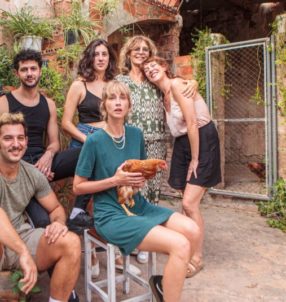