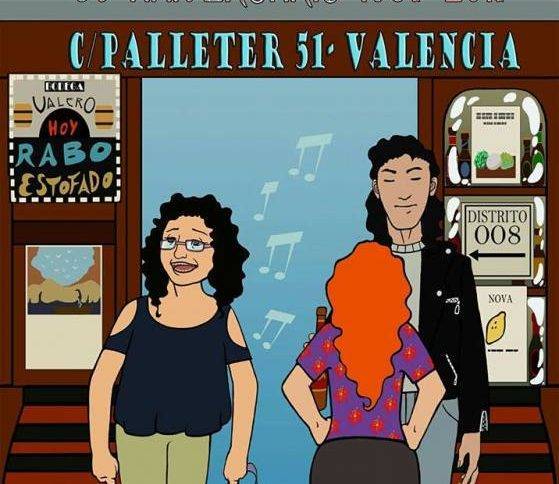 Over 30 years ago in Valencia…brothers Toni and Javi arrived at ‘La Bodega Valero’, a traditional bodega that sold wine and beers and was popular with the locals. They soon started to add their own personal touch to the bodega and installed a small kitchen, seating inside and a terraza outside too. There’s definitely a family feel to the place…

Over the years, Bodega Valero has become a hit with the locals of the attractive and mellow ‘Juan Llorens’ barrio and attracts people of all ages from around town. It would be fair to say that it draws a bohemian crowd where everyone is an equal. This makes for an authentic yet alternative Spanish bodega that is down-to-earth, informal, spontaneous and tolerant too.

The warm interior has wine barrels behind the bar and a wall with dozens & dozens of photos of all the good times that have been had by the owners and varied clientele over the years. Adorning the bar’s muros are a healthy mish-mash of rebellious & alternative causes in poster and painting form… as well as photographs of the bands that have played here. Indeed, they used to have regular acoustic live shows featuring local underground artists.

Back in 1995, this writer’s first years in Valencia were spent teaching English in a language academy across the road from the Bodega Valero and this member of the ‘24/7 Valencia’ team has been coming down to the Bodega ever since. Joining in the wild and joyful  summer anniversary party with tapas, wine, beer & sangria aplenty throughout the day until the early hours of the morning was a lot of fun! The live improvisation with Valencian music played on traditional instruments dolçaina (a reed instrument) & tabalet (percussion) with the Bodega crowd heartily singing along was really memorable and typical of the open vibe here.

The music soundtrack is varied with rock’n’roll, blues, hard rock, punk, reggae, pop and electronic music among the many sounds to be heard seeping out onto the terrace. Indoors, they often have a rotation of classic films and live music concerts on the DVD player too. The last time we went the evening began with energetic Spanish 80s underground pop-rock and, as the clock turned to midnight, 60s Spanish rock’n’roll was seeping out of the speakers as the Rocky Horror Picture Show film was silently being screened.

There is a good range of 17 mostly red wines to choose from, including Rioja and Ribera del Duero and this includes 4 white wines (like Ribeiro & Turbio Gallego) and a Rosado too. On the tapas front, our favourite is their speciality of Pechuga en Salsa (a mildy spicy chicken with mushrooms, tomato, onion and herbs). You can also savour their Sepia Plancha (grilled cuttlefish) and Tortilla de Patatas o de Verdura (Potato or Vegetable Tortilla).

They do a tasty Falafel with lettuce, tomato and yoghurt sauce. We’ve always enjoyed their Spanish Ham and Cheese tapas over a Spanish beer including Alhambra and Ambar. Their Anchoas (Anchovies) and Albondigas(Meatballs) are homemade. Check out their nicely salted and well-presented Ensaladilla Rusa (Russian Salad) as a starter on their relaxing terrace.

Also worth trying is their Basque tapas Txistorra a la Sidra, which is a combination of sausage and egg in cider. Many of these dishes are available as ‘bocatas’ (generous sandwiches including lamb & pork choices) too. With nearly 20 tapas to choose from, Bodega Valero is open for breakfast/lunch/dinner everyday with a reasonably priced menu del dia during the week.

On a mellow Tuesday evening, the last time we sat out on the tree-lined terrace for tapas, we savoured a refreshing Russian salad, a tasty chicken in sauce and a filling grilled cuttlefish. We sampled a good range of their red wines by the glass, which could partly explain why the evening got merrier by the hour. Going back inside to enjoy the cosy interior, we shared a naughty Tirasimu to finish off the night. It made for an interesting contrast as we digested with a civillised manzanilla (camomile) tea with the stereo playing ‘Pretty Vacant’ by The Sex Pistols…

Set in the very pleasant Juan Llorens district, it is under 10 minutes walk from the centro histórico and just a stone’s throw from the main avenue of Gran Via Fernando El Católico. Be adventurous and try out a proper Valencian bodega with a rich history and an interesting clientele. After all this time, the Bodega is still undiscovered by tourists but it is welcome to all.

Good times throughout the year!