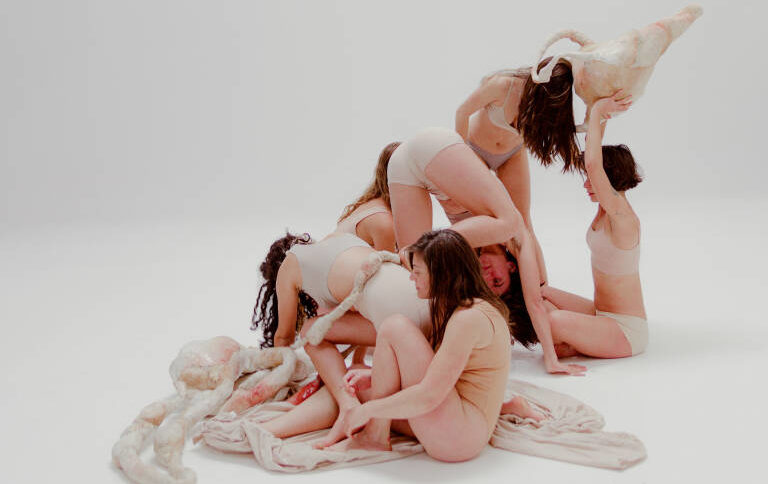 Cabanyal Íntim kicks off with different perspectives and artistic disciplines via ‘El Tiempo’, the motto of its 10th edition, scheduled from May 6th to 16th. The figure of this year’s poster, represented by a disturbing gentleman dressed in black with an open umbrella, will come to life on May 6th with a stage action in the northern station of Valencia and Cabanyal market, which will be developed in collaboration with the EMT, Adif and Station Shops. It is the starting signal… that will culminate in the afternoon with the opening of the festival at the Teatre El Musical (TEM) in a gala with various performances.

From Friday and for the next ten days, the festival proposes a scenic and social immersion through the Cabanyal -one of the “coolest” neighborhoods in Europe according to ‘The Guardian’- through theatre, dance, musical or performance. The spectator will be able to trace different theatrical routes in the morning and afternoon, combining the short and long pieces of the programme. Shows that will host unconventional spaces such as La Batisfera, Mar d’Amura, L’Escorxador, the headquarters of the Association of neighbors of Cabanyal-Canyamelar, Woody Loop or Tarannà Multipurpose Studio.

The short pieces are six absolute premieres, that invite you to get “Lost in Time” with different stories and characters. A quien pueda interesar: Una historia de la guerra, written by Elia López and directed by María José Peris, is a musical about the adventure of an octogenarian who wakes up one day rejuvenated by the disturbing visit of her deceased brother. Based on Genet’s play Las Criadas, Amarillo 102 covers all the hatred generated over the years between an unusual couple whose dramaturgy is signed by La Intensa, while Café del Temps serves as an experimental container for Juja Teatre to narrate the life of two grandparents based on the memories contributed by the audience in an exercise of improvisation.

El camino de las cabras is the text created for the IV Torneo de Dramaturgia de Valencia that La Teta Calva will premiere at the festival. A stony tragi-comedy that invites the audience to let themselves fall into the ravine. The Bañistas sincronizadas will dive, swim and float in the past, present and future with the Cia. Consuelo Blanco Piscinas comes from Madrid. A temporary journey through water to which will be added Réquiem por Kronos in which Linda Vitolo and Anna Estellés will present the life of a woman cornered by loneliness and the years passing…

This weekend, the festival will also host the premiere of two full-length plays. The Miss Panama Collective will present Theme Park Cabanyal, a dystopian and fictionalized tour of a future Cabanyal neighborhood turned into a theme park directed by María Salguero. And Lamar will take the stage of the Teatre El Musical with Yo tardaré un poco más, in which a young student of criminology and dramatic art will turn her reality and fiction into a terrifying cocktail.

In the Íntims a poqueta nit section, Cia. Jimena Cavalletti with musical humor and large doses of surrealism will introduce us to Pela y Pelu: Finales de Mierda, a show in which two women show without filters their passage through glory.

The result of the creative writing workshop given by actress, director and playwright Eva Zapico at the SGAE Foundation as part of the parallel activities of Cabanyal Íntim, can also be seen this Saturday 8th at the Zona Santiago multi-space with a reading open to the public of the texts worked on by the students.

The festival’s experimental and avant-garde stage space, Territori Performance, will celebrate its sixth edition this Saturday, May 8, at the Teatre El Musical. From 18:00h to 21:00h uninterruptedly, visitors can walk through its entrails to be surprised by six performative actions, five of which are world premieres. A free tour in which the public will explore the various existential, corporal and emotional maps, with Ama by Almudena Ardit; Ánima by cia. Matteria; Boca a la pared by Alba Murcia; El origen de la vida by Cía. Colaboratorio; Time on hold by Pepe Penya; and Transiciones: contracción by Manuel López.

After Sunday, the festival will resume its pulse next weekend with more theatrical experiences, activities and concerts to celebrate its tenth anniversary.