You are here: Home  /  Places  /  CALLE CABALLEROS IN THE HISTORIC CENTRE OF VALENCIA
Places 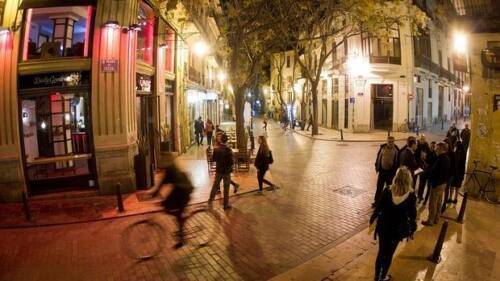 CALLE CABALLEROS IN THE HISTORIC CENTRE OF VALENCIA

##Like most of the Barrio Carmen, Calle Caballeros has a chameleon-like quality which allows it to adapt to whatever is going on around it. By day it is an ancient & rather dusty thoroughfare but by night it’s the noisy & happening main artery of Valencia’s nightlife. The street, while crying out for pedestrianization, is strangely quiet on a Wednesday afternoon. However, on weekend nights it really comes alive with bars, restaurants, street hawkers and revellers of every hue from stuffy, well-heeled theatre-goers to grimy street punks with skinny Alsatians passing through from one end of Carmen to the other. Whatever may traipse past on a Saturday night, Calle Caballeros has seen it all before and has long attracted the great, the good (and not so good) of Valencia.

The street is known for its high door knockers, too high for someone on foot but easily reachable from the saddle of a horse. It was built on the old Roman High Street, a part of the city frequented by wine merchants and a place where staff of the local prefect of the city could meet prostitutes. The Roman gates of the city were at the crossroads with the Calle Calatrava (not the famous architect), leading to Plaza Negrito.

Wandering down from la Bolsería, at the beginning of the street is Cafeterìa Sant Jaume housed in the old Cañizares (not the famous goalkeeper) Pharmacy, renowned back in the early 1900s for its homemade wonder cures, potions and ointments. While these days it’s more ‘Agua de Valencia’ than lotions for warts and hair loss, it’s still as good a place as any to sit among the trees and watch the world go by.

The Borgias owned various different properties up and down the street at one time or another and one of those was number 36 on the left, now known as the Casa de los Fernandez de Cordova. Although only its mundane Neoclassic façade is visible from the street, this place is a veritable mishmash of Valencian history all crammed in one house. Inside is a tower from the tenth century, a Moorish wall built by King Abd al Aziz ibn Ali Amir.

Another part of the house is the Bab Al-Hanax gate through which Charlton Heston, er sorry, El Cid entered the city when he conquered it in 1095. There’s also an original medieval street, some renaissance ceiling paintings and the Borgia coat of arms.

Number 28 also had some interesting owners. It was bought in the 17th century by an Anglo-Irish “gentleman” called Hollier and still preserves its impressive 17th century façade. Hollier claimed to have come to Spain to escape the persecution of Catholics in his home country but his sizable fortune, his less than “noble” manners and the fact that no one had ever heard of him lead people to believe that that the source of his wealth was if nothing else mysterious. Some said he was a smuggler, others a burglar, one story said he was a ship’s captain who had been charged to transport a wealthy family to France but had murdered his passengers and run off to Valencia with their possessions. Whatever the story, Hollier never spoke about his past and the family never returned to England. His daughter, Isabel Hollier Shelly married into a down-on-its-luck noble family (they got her money and she got their social standing) and her coat of arms are on the door.

Another Borgia property was the Palacio de los Condes de Olivia at number 33, opposite the enormous yellow and orange Palacio Alpuente. Rodrigo de Borgia who became the second Pope Borgia lived here as did his allegedly incestuous children: Cesar, who went on to become Cardinal of Valencia, and Lucrezia, who went on to poison half of Italy’s aristrocracy.

Throughout the centuries, dozens of famous dignitaries, monarchs and princes have lived or stayed here, which may not have been such a good idea. The house seems to hold some sort of curse and many of those who spent the night here later met bloody and violent ends. Lucrezia didn’t die here but more than one of her visitors seemed to suffer from serious stomach upsets shortly after spending the night at the house. Cesar was killed in battle, Juan Borgia was stabbed to death and then thrown into the river Tiber. Franco’s would-be successor Luis Carrero Blanco stayed here and was later blown up by Basque separatist group ETA. A few months after staying here, Alfonso de Borbon was accidentally shot and killed in the presence of his brother…the fomer king of Spain Juan Carlos I. The list goes on.

The end of the street is a little less aristocratic. The Teatro Talia is housed in the old Casa do los Obreros theatre, (or house of the worker) built as part of a nineteenth century Catholic Socialist movement to divert the working-classes away from Communism and back to Christianity. “Give ‘em a bit of theatre and they’ll forget they’re being oppressed” was the idea of the time. Nowadays, of course, we have Celebrity Big Brother. Originally, the plays were put on by non-professional local workers but now it works as an orthodox theatre whose programme is on par with any of the other theatres in the city. Just opposite, at number 8, in stark contrast to its neighboring medieval palaces with their seventeenth and eighteenth-century refits, is the playful, Modernist Casa de los Dragones (so called because it’s got loads of dragons on it, believe it or not). A sign of new bourgeois money, the house was probably built with the ill-gotten gains of a banana plantation in Cuba. Its ostentatious design was in direct defiance of the sniffing old money aristocrats further up the road.

That takes you more or less to the end of the street. Next time you’re behaving badly down the Calle Caballeros don’t think you’re the first, you’re just part of an ancient tradition which goes back to the Romans. No matter what you do, these old stones have seen far worse.