You are here: Home  /  Food  /  ‘CASA BALDO’ IS OPEN AGAIN IN THE CENTRE OF VALENCIA!
Food 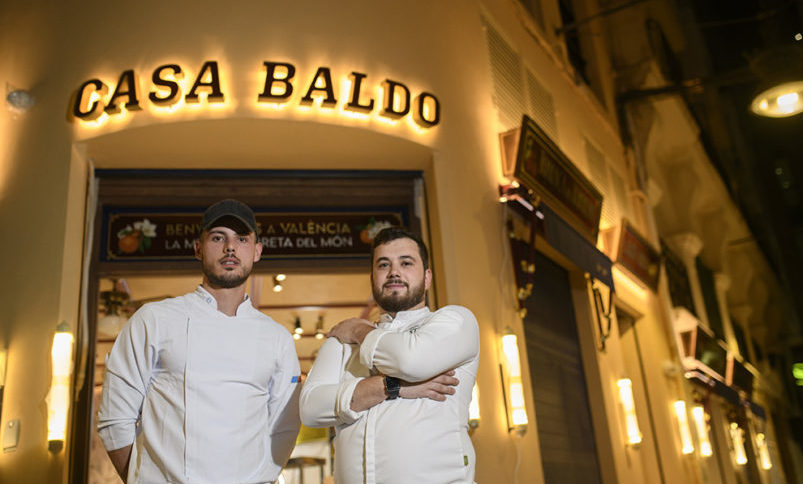 ‘Casa Baldo’, the classic restaurant bar on C/ Ribera in the centre of Valencia, returns completely renovated. It was first opened in Valencia in 1915! Grupo Gastro Trinquet recovers another emblematic space in Valencia, as it already did with ‘El Trinquet de Pelayo’ or ‘Vaqueta Gastro Mercat.’ After extensive remodeling, the new restaurant  ‘Casa Baldo’ manages to preserve its customary character, updating the interior design and the recipe book. Baldo pays tribute to the Valencia of the 50s, when the centre of the city was a hive of art, sports, show business and theatres and café bars.

‘Casa Baldo’ already wears a new suit. More handsome and sophisticated, but just as Valencian and traditional. The emblematic business on C/ Ribera, divided into three locations, retains its historical character, in a reopening that we owe to ‘Grupo Gastro Trinquet’. A restoration company that is used to recovering historical spaces in the city, as has already happened in La Roqueta with El Trinquet de Pelayo or in Ciutat Vella with Vaqueta Gastro Mercat. They all share the same tribute, precisely because of that first restaurant, Pelayo Gastro Trinquet, which was born in the Cathedral of Valencian pilota.

The passion for this sport and the updating of the Valencian recipe book are the two essential foundations of the young hotelier group. This is confirmed in its last opening, Casa Baldo, which was began in 1915 in the epicenter of  Valencia. An establishment linked to the period of entertainment, show business and terrace cafes such as the Lauria cafeteria, Barrachina, Casa Balanzá and Café Metropol…

For all these reasons, although there has been a deep Restoration of this historic space, by the Janfri & Ranchal studio, it has also been decided to maintain the divisions of spaces -up to three different premises, plus a private dining room- and some elements from previous times, such as the original wooden windows or the collection of historical objects and photographs related to the Valencian pilota, which have been recovered in collaboration with David Sarasol, director of the Museu de la Pilota in Genovés. In addition, in another tribute to Valencian design and culture, pieces such as the mano de pilotari by the fallero artist Manolo García or the Valencian ceramic murals by the artisan Xavier Claur have been integrated. Those responsible for the group explain that their hallmark is to transform “classic, emblematic and traditional” sites into updated spaces “to ensure them a second life.”

Also in relation to the gastronomic offer, which once again is in charge of partner and chef Pablo Margós. “We show off the Mediterranean pantry, this time with a bar and delicatessen, as well as a strong base of traditional and signature rice dishes,” he details. All of this without giving up the regulars of the house: cuttlefish with mayonnaise, gilda, bravas and the classic smoked salad, always with his personal touch.

Since Baldo said goodbye in February 2021, affected by a harsh pandemic, the city has been mourning the loss of another classic in the vicinity of the Plaza del Ayuntamiento. As one of Grupo Gastro Trinquet’s specialties is to revitalize businesses in key places -it has already done so on Calle Pelayo or in the Mercat Central-, they will repeat some previous dynamics.

The new restaurant can be enjoyed both in the different interior rooms and on a large terrace facing C/ Forners and C/ Ribera, with uninterrupted hours and every day of the week. There will be proposals for breakfast, at lunchtime -another of the great strengths of this gastronomic group-, picaeta with vermouth, traditional food and, of course, the possibility of having a casual dinner at the bar or more calmly in any of its four interior rooms.

Regarding the gastronomic offer, the restaurant shows a deep respect for Mediterranean recipes, based on the market, proximity and season, but as we explained, it has no prejudices when it comes to rejuvenating the classic recipe book. In this way, diners will find the classic starters that they like so much in the Trinquet, such as the creamy fritter or the marine titania, but they will also find more bar, laterío and charcuterie, based on ham, gildas, torreznos,  sandwiches and more. There will also be a good offer of vegetables and shellfish, grilled meat and fish, and the fundamental base of rice. Margós always moves between orthodoxy including Valencian paella, arròs al forn, arroz de puchero and signature version cocotxas with onions with cauliflower.

The future is born from the past. It was 1892 when Baldomero Estelllés, a native of Turís, arrived in Valencia to work as an apprentice in a grocery store. When the owner retired in 1915, he remained in charge of the business, which would be renamed ‘Casa Baldomero’. At that time the war had not started and the Roaring 20s, also known as Belle Époque, were experienced. Valencia had become a hotbed of artists, to the point that Baldo, located in a privileged enclave, came to be surrounded by innumerable variety halls. With the passage of time, most of them have disappeared, although there are still cinemas, some theatres and a lot of traffic. In 1958, Baldo expanded its offer, adapting to the tastes of that time, and installing the cafeteria-brewery, which acquired the current name of ‘Casa Baldo’. From this date, and for 63 years, it was a benchmark for the city’s hospitality industry, where personalities have never been lacking. Artists, actors, intellectuals, athletes and even politicians have met here, all regulars at the venue, as one of the tile murals on display on the façade rightly mentions. The farewell to which the establishment was led in 2021 was greatly regretted, although in reality it was temporary, followed by a well-deserved renovation.