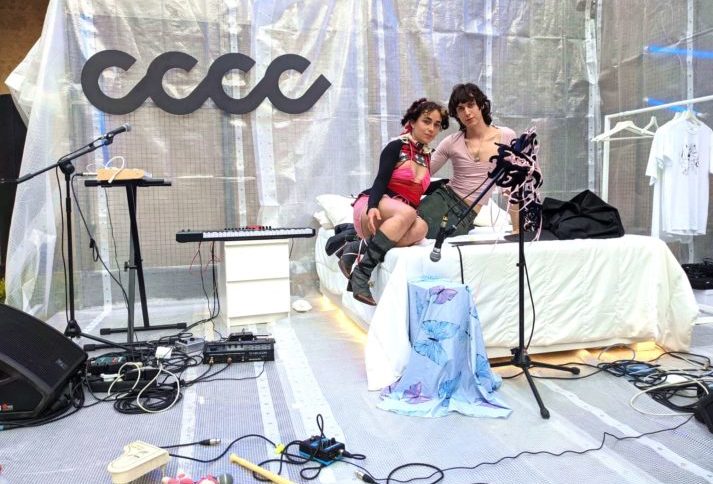 ##As part of the pop-up series of live shows titled ‘Conciertos desde la cama’ (Concerts from the bed), Ralphie Choo performed at the Centre del Carme on Saturday, May 8, with pup puppy as the supporting act. The event was hosted in the beautiful outdoor quad of the museum and sponsored by Vibra Mahou. One of the ’24/7 Valencia’ team went along to the show to see these up-and-coming artists bring their new music into the historical space.

The Centre del Carme Cultura Contemporània is an exhibition & cultural centre in a former 13th-century convent with a bell tower & a Gothic cloister. It is against this majestic backdrop that the show’s humble stage sits, lit with a colourful glow. As the evening begins, visitors are seated (in socially-distanced groups of two to four chairs) and given the chance to admire the juxtaposition of the Gothic architecture with the hum of electrical activity whilst the performers set up. The stage itself is quirky in design; with the theme of ‘Bedroom Pop’ taking precedence, the elevated platform features a bed with white sheets, a small clothes rail, a tiny desk, and some other homely décor. The look is minimal but intimate, perfectly conveying the home-grown nature of the music to be performed.

First onto the stage was pup puppy, a local artist whose experimental electro-pop bathed the stage in an ethereal soundscape. Playing with dynamics, textures, and unconventional sounds in their music, pup puppy’s set was not for the faint-hearted. The performers were dressed in similarly glorious outfits that had colours, layers, and frills which complemented the style of music. The finale of the performance featured a sonic climax of screams and distorted lyrics that blended into the strong beats of the fascinatingly-produced backing tracks. The night opened with an attention-grabbing act, and set up the excited atmosphere for headliner Ralphie Choo to go on.

During the intermission between the performances, we were all free to wander around the Centre del Carme itself. As the low sun cast a golden glow across the space, it was a great opportunity to have a quick peak into the free contemporary art exhibitions and pretty gardens around the space (perfect photo opportunities!).

Back at the stage area, several friends and fans of Ralphie Choo sat up front in the seats as he and his accompanist set up their equipment. As they settled into their positions, the crowd cheered eagerly. The 21-year-old singer, who is based in Madrid, began his set with his smooth vocals and quickly settled into a confident performance with steady lo-fi, hip-hop, and R&B beats. Although evocative of many contemporary indie-pop artists, his songs were not repetitive and dull. In fact, his character shone through as Spanish motifs wove through his music, the flamenco samples mixed warmly with hip-hop beats and interesting vocals switching between English and Spanish lyrics. His set was a crowd-pleaser and he performed with a youthfully jovial energy as the sun turned the skies pink behind the Centre del Carme’s clock tower.

Overall, the concert was a fun and exciting night for discovering new artistic offerings in a beautiful Valencian setting. Musically speaking, fans of PC music, experimental pop, and lo-fi bedroom pop will enjoy music from these two artists. There are still two more opportunities to go to one of these ‘Conciertos desde la cama’ at the Centre del Carme featuring more new-pop artists: 9ckles and Jimena Amarillo on Saturday, June 5; and Irenegarry and Lashormigas on Saturday, July 3.