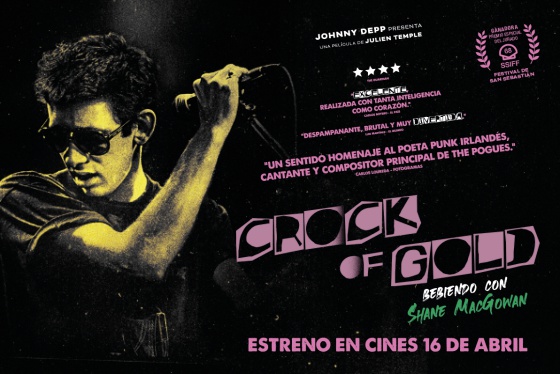 VALENCIA CINEMA…’Crock of Gold: A Few Rounds with Shane MacGowan’ AT ‘CINES BABEL’ FROM APRIL 16-22

¡Fiesta! Shane Macgowan knows Spain well and the ’24/7 Valencia’ team have never forgotten his rousing rendition of ‘Dirty Old Town’ at the Benicassim Festival with Pete Doherty and Babyshambles. Combining previously unpublished archival footage of the band and MacGowan’s own family, along with animations by, among others, illustrator Ralph Steadman, Crock of Gold is a celebration of Irish punk poet Shane MacGowan, lead singer and songwriter of The Pogues. Produced by Johnny Depp.

Here are some reviews from Spanish newspapers…

“From the first to the last frame this stunning, sincere, brutal, sad and very funny documentary is basically a soul vomited on the screen.”
Luis Martínez: El Mundo newspaper

“Incredible film (…) it has the virtue to entertain, the efficiency to move and enough shrapnel to see the wound, the pain and the poetry of the defeated.”
(Score: ★★★★ (out of 5)”
Oti Rodríguez Marchante: ABC Newspaper

“The centre of attention in this documentary is the ex-leader of The Pogues, of course; but around him Julien Temple weaves other stories and experiences, in the manner of a twilight elegy but with irony (…) Score: ★★★★ (out of 5)”
Quim Casas: Newspaper El Periódico

“The efficient work with the archive material (…) makes the final distillate taste as good as a long drink of Bushmills. (…) its 124 minutes are devoured with the same avidity with which one listens to Streams of Whiskey.”
Enric Albero: El Mundo newspaper

“This reviewer has the impression that Temple’s formal decisions, which cram the shot to the point of suffocating it (…) are intended to correspond to the variegated passion for the life of his biographer (…) Score: ★★★★ (out of 5)”
Sergi Sánchez: La Razón newspaper

“An ode to the punk of The Pogues. Julien Temple traces the career of the leader of The Pogues in a documentary full of songs, Irish feeling and alcohol (…) Score: ★★★★ (out of 5)”
Eulàlia Iglesias: El Confidencial