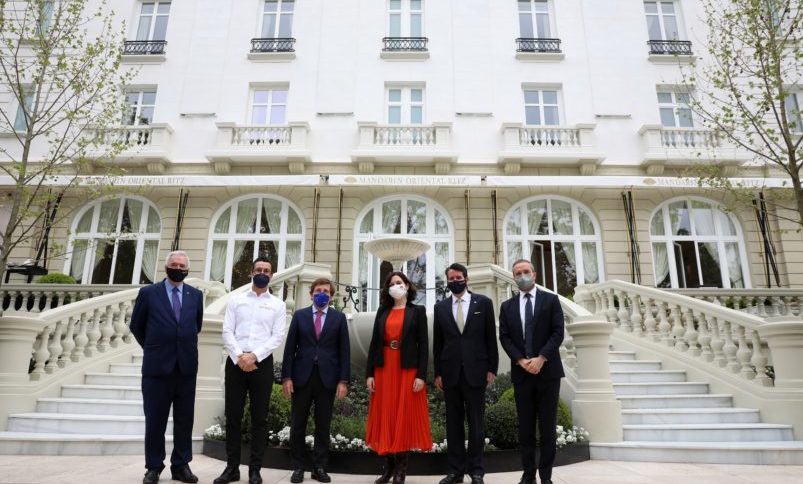 ##MANDARIN ORIENTAL RITZ, MADRID IS OPEN AND NOW UNDER THE GASTRONOMIC DIRECTION OF QUIQUE DACOSTA.

Three new restaurants, Deessa, Palm Court, The Ritz Garden and two new bars, Pictura and Champagne Bar, make up the proposal of the 3 Michelin star chef at the renovated and iconic hotel.

“It is exciting for my team and me to see our dream come true, we have arrived in Madrid with the greatest desire to contribute our grain of rice at the best gastronomic moment of the city”, said the chef.

Mandarin Oriental Ritz, Madrid officially opened its doors today under the creation and gastronomic direction of the three Michelin star chef Quique Dacosta, and after the most ambitious and extensive refurbishment in its 110-year history with an opening ceremony that took place during the morning and was attended by the President of the Community of Madrid, Her Excellency Isabel Díaz Ayuso, the Mayor of the city, His Excellency José Luis Martínez-Almeida and the Director General of Turespaña, Don Miguel Ángel Sanz Castedo, who at the end of the event visited some of the gastronomic concepts together with the chef.

“This reopening symbolises the reopening of the sector, of travel, of flights. Of coming back to life. We already have 11,000 5-star hotel rooms, to which we now add our beloved Mandarin Oriental Ritz, Madrid, which has been, is and will be one of the most luxurious hotels in the world”, the President of the Community of Madrid began her speech.

After a brief presentation, the ribbon was cut at the opening ceremony by Greg Liddell, General Manager of the hotel, James Riley, CEO of Mandarin Oriental Hotel Group and Pablo Bravo, representing the Olayan Group.

The Mayor of Madrid, José Luis Martínez Almeida is confident that openings such as that of the Hotel Ritz will “continue to strengthen Madrid’s image abroad as a tourist destination of excellence, where visitors come attracted by the open nature of the people of Madrid, its gastronomy, culture and shopping tourism”, and he is delighted that “the people of Madrid can now enjoy the gastronomy of chef Quique Dacosta”, he said.

In this way, the renovated Mandarin Oriental Ritz, Madrid will become one of the most innovative culinary destinations in Spain thanks to Dacosta, hosting a total of five gastronomic spaces created and directed by the three Michelin stars.

“I am excited to see how Mandarin Oriental Ritz, Madrid is now open to the world after five years of work. We have our batteries really charged to begin this exciting journey in a city as wonderful and at the same time as demanding as Madrid”, said the chef excitedly during the opening event of the iconic hotel.

Dacosta is excited to see his dream come true: “We have arrived in Madrid with the utmost desire to contribute our grain of rice at the best gastronomic moment in the city”, he concluded.

The hotel’s five new gastronomic universes will be complemented by the renovated lounges of the century-old hotel, which will once again shine in all their splendour. The Salón Real and Salón Felipe IV, both overlooking the Prado Museum, have been carefully restored to once again host the finest events and family celebrations.