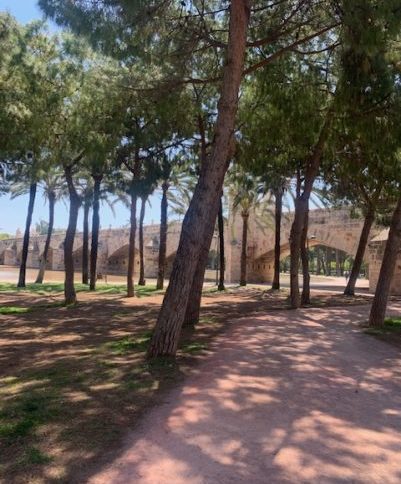 ##El Jardín Del Turia is Spain’s largest public urban park with a length of almost 10 kilometres. Populated by exotic palms, fragrant orange trees and sparkling water features – the gardens are a naturist’s safe haven in the centre of the vibrant city. The park itself is based in the old Turia Riverbed, which after the Grand Flood of Valencia (1957) needed rediverting and redesigning into something more useful and less harmful to the city. Originally, the city had plans to create a communications axis to connect the port to the airport and solve heavy traffic congestion. However, this idea caused public displeasure. “El riu és nostre i el volem verd” aka “the river is ours and we want it green” was a citizen movement which fortunately won, meaning El Jardín Del Turia was founded as we know it now, a place of exercise, leisure and nature.

Crowned by 18 bridges that mark the history of Valencia, El Jardín Del Turia is most famously known for its larger attractions such as the Bioparc and ‘The City of Arts and Sciences’. However, in this series we will explore the lesser-known secrets El Jardín Del Turia holds such as sunrise yoga sessions, Swan Boats in Parque de Cabecera (yes, a park within the park!) or the amazing cycling and running tracks which make exercise in the park congestion free.

Over the next few weeks, keep an eye out for upcoming articles suggesting ways to best utilise this urban oasis!