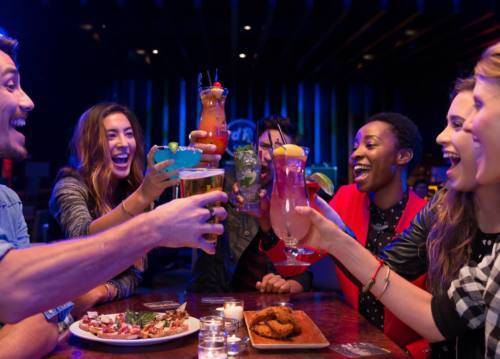 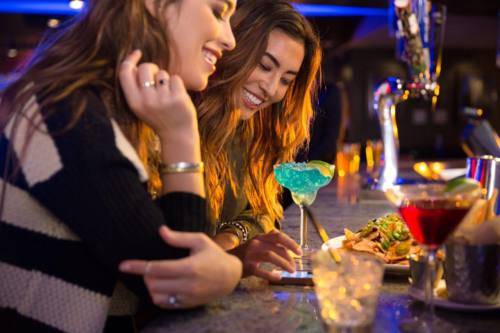 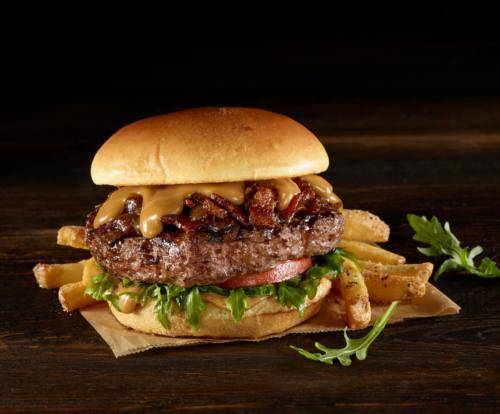 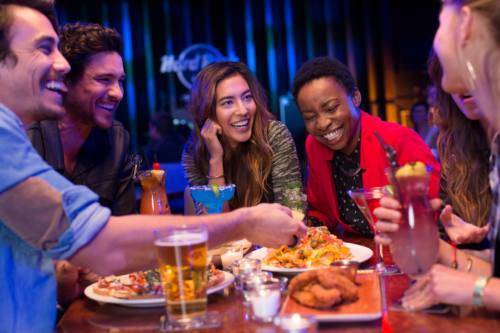 Hard Rock Cafe Valencia is easy to find as it is just off Plaza Ayuntamiento, so it is as central as can be. If you are arriving from the main Valencia train station, it is literally across the road!

Immediately, one of us spotted Noel Gallagher’s Danelectro electric guitar on the wall and the other clocked Madonna’s famous black corset on the wall opposite! Flamenco lovers can admire Raimundo Amador’s Spanish guitar. Rockers can check out Pretender Chrissie Hynde’s Telecaster as well as Bruce Springsteen’s tour top. Others that stick in the memory were Rod Stewart’s stripy trousers from the 70s & Joan Jett’s leather pants and the late Chris Cornell’s guitar from Soundgarden. We even came across Sting’s keyboard and trainers from Robbie Williams! There are many more objects lining the walls on both floors, covering a good number of genres of music too…

For lunch, we decided to try out the current ‘World Burger Tour’, which we ordered with some tasty fries and couple of refreshing Spanish beers. Seated on a stage which features monthly live music, we decided to share our exotic & healthy Vietnamese burger and enormous German burger, noticing the contrast between the Asian and Northern European approach to cuisine…

Suffice to say, we were impressed by the freshness and generous portions! The ‘Schnitzel burger’ was really superb, very filling and impressive. A true giant amongst burgers! The Vietnamese ‘Banh Mi’ is one of the staff’s favourites, which is a really good recommendation! We didn’t even need dessert or milkshakes as we were completely sated by what we had. Everyone has different tastes and the Hard Rock menu & carta is very ample, so there is a “helluva lotta” choice here. They have a kids menu too so everyone really is welcome.

Hard Rock Cafe Valencia’s pretty cool music video soundtrack was nice and eclectic. We enjoyed the differing rhythms and melodies of Beyoncé, White Stripes, Justin Bieber and Coldplay on screens as we lunched & travelled on our ‘World Burger’ journey around the globe! The service was very friendly, kind and efficient so feel free to ask the experienced and informed staff for advice regarding lunch, dinner and more…
.
INTERVIEW WITH HARD ROCK CAFE VALENCIA

1. Where did the famous Hard Rock Cafe begin?
It all started with two music-loving Americans who just wanted to find a good burger while living in London. Hard Rock’s founders had a vision to combine music, memorabilia and delicious all-American fare for a one-of-a-kind guest experience. On June 14, 1971, they opened their own American style diner in an old Rolls Royce dealership and called it Hard Rock Cafe.

2. Can you tell us about the 47th anniversary party at Hard Rock Cafe Valencia?

To celebrate the brand’s 47th birthday on June 14th , Hard Rock Cafe Valencia will pay homage to 1971 with a 70s themed party in the evening featuring a DJ set from 09:30PM to 11:30PM, staff with 70’s costume and other surprises. Guests are also encouraged to wear disco era clothes and join in the festivity.

3. Hard Rock Cafe Valencia is quite new in the city. Can you tell us something more about Hard Rock International?

With locations in 75 countries, including 182 cafés, 24 hotels and 11 casinos, Hard Rock International (HRI) is one of the most recognized companies in the world. It all started with a guitar donated by Eric Clapton. Since then, HRI has more than 80,000 pieces make it the possessor of the world’s largest collection of musical memorabilia that is exhibited in his premises. HRI is also known for its collection of fashion and merchandise related to music, live shows and an award-winning website. HRI owns the global brand for all Hard Rock brands and operates and awards franchises in the world’s most iconic cities such as London, New York, San Francisco, Sydney and Dubai. It also owns the licenses and / or manages properties / hotels and casinos around the world. This includes places such as Bali, Cancun, Florida, Hollywood, Ibiza, Las Vegas and San Diego. The newer locations of Hard Rock Cafe include St. Petersburg, Fortress, Casablanca and Chengdu. The newer projects of Hard Rock Hotel, Casino or Hotel-Casino include Atlanta, Atlantic City, Berlin, Budapest, London, Los Cabos, Maldives, New York, Ottawa and Dalian and Haikou in China. You can find more information about Hard Rock Cafe International on our website www.hardrock.com

4. What is the ‘World Burger Tour’ at Hard Rock Cafe Valencia?

The international menu includes a selection of favourites from different corners of the world. The World Burger Tour is a limited-time gastronomic offer of Local Legendary burgers, inspired by the flavours of different Hard Rock Cafes around the world. It will be available at Hard Rock Cafe Valencia until June 29, 2018. For that limited time, customers can enjoy the best known flavours of such iconic cities as Sydney or Barcelona, in their Hard Rock local stores.
5. Please describe each burger for our well-travelled readers…
• Aussie Burger (Sydney, Australia) – burger with caramelized onions, crispy bacon, cheddar cheese, fried egg, beetroot, lettuce, and tomato, served with chips.
• Banh Mi Burger (Ho Chi Minh, Vietnam) – burger with spicy Vietnamese icing, topped with sliced and pickled cucumber, accompanied by cilantro and chives and served with chips.
• Olé Burger (Barcelona, Spain) – with spicy Romesco sauce, grilled vegetables, shredded goat cheese and arugula, served with French fries.
• Schnitzel Burger (Cologne, Germany) – the legendary breaded German schnitzel, with bacon, lettuce, tomato and sauerkraut with Dijon mustard, served on bretzel bread and accompanied by French fries and Dijon mustard.