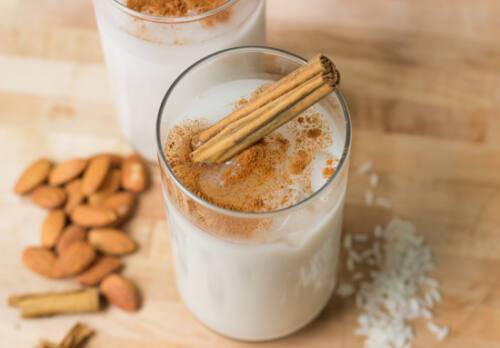 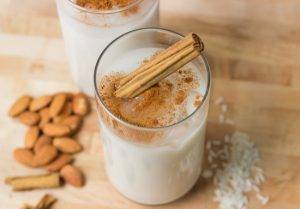 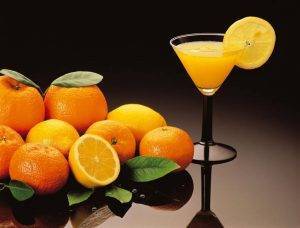 It’s September 2017 and the warm days are still upon us so it’s time for a long, cool drink. Valencia has two of its very own. Well, horchata was invented in the Sudan and Agua de Valencia, is really just Buck’s Fizz with a twist. However, let’s not get caught up with details, these days they are both considered as Valencian as paella, fireworks and construction companies.

Horchata is a bit of an acquired taste. While some would go miles out of their way in the summer heat for just a sip, others would go even more miles just to avoid the stuff (one person we spoke to described it as milk mixed with sand). It looks and tastes like a sort of nutty milkshake, although, actually, there’s no milk in it. It is made from crushed chufas, or tiger nuts, and water. Sometimes in a sort of slush puppy form, it’s always cool and refreshing. Befitting its cough medicine texture, it’s really good for you. Rich in iron and potassium, it has diuretic and energy restoring properties, sort of a medieval Lucozade really.

The chufa originates from the Chuf area of Sudan. It was one of the first plants to be cultivated by man. They found sacks full of the things in Tutankhamun’s tomb just in case he fancied a few glasses of horchata in the afterlife, we suppose. The chufa, like most good things, was brought to Valencia by the Moors around the year 700 but it wasn’t until the Christian conquest that horchata got its name, or so legend has it. Some days after the conquest, the conquering Christian King Jaime I was riding round the huertas in the Muslim farmlands of Alboraya surveying his newly conquered properties. It was a hot and dusty day and a Moorish peasant woman offered him a drink. “What is this?” he asked as he gulped down the flavoursome nectar (or milk with sand, depending on your taste). “Aixo es llet de Xufa, Senyor” (“It’s Chufa milk, sir”), replied the Moorish woman in perfect Valenciano. “Aixo no es llet de xufa, aixo es or, xata” (“That’s not chufa milk, that’s gold, my girl”, or words to that effect). And so the name ‘or xata’, or horchata, was born. Just why the king was riding around on his own amongst his enemies just days after a fierce battle, just why he accepted a dodgy-looking drink from one of them and, indeed, who exactly recorded this conversation has been lost to history, but that’s the only explanation you’ll get round here.

Horchata has become the archetypal Valencia summer drink and Valencians flock to cool off in the ceramic-tiled horchatarías dotted all around the city, typically decorated in clinical white and blue with wrought iron tables and chairs for maximum cooling effect. One of the most famous is the 200-year-old ‘Horchatería Santa Catalina’ opposite the bell tower of the Santa Catalina church, tucked away just off the corner of the Plaza de la Reina.

If you want to go to the real home of horchata, take the short trip out by bus or metro to Alboraya, which skirts the city to the northwest. The place is like a horchata theme park with huge, palatial horchaterías all along the main street, the jewel in the crown being ‘Horchatería Daniel’, named after its founder Daniel Tortajada, the most famous orxater of them all. He started off with a small bar in the centre of the village before moving to the present vast hall serving, along with horchata, all manner of ice creams and sweet cakes all made on the premises. Most Valencians enjoy a good fartón with their horchata, a long sausage-shaped sweet bun covered in icing. Apart from having a name that cries out for infantile jokes, it’s perfect for dunking into your drink. Horchatería Daniel has served horchatas to kings, princes, writers and stars of stage and screen. The walls are decorated with photos of Daniel with football stars and the likes of Camilo José Cela and Salvador Dalí. Hemingway also came here but refused a horchata and had a glass of wine instead.

If you, like Mr Hemingway, prefer something a little more alcoholic you might want to try Agua de Valencia, a mix of orange juice, cava, cinnamon, sugar and then anything from Cointreau to vodka that the bar owner fancies throwing in. It’s one of those drinks that, if you go too fast, feel like nothing much at all until you try to stand up. Tying in nicely with the Valencian love of communal paella culture where everybody eats from the same dish, Agua de Valencia is usually served in a large pitcher and everyone gets a glass. Unlike its British cousin the Buck’s Fizz, it has no ‘Hooray Henry’ connotations. It’s a popular and relatively cheap way for a group of friends to start an evening or an excellent accompaniment to watching the dusk settle from a terrace on the Plaza San Jaime or Plaza Negrito in the historic centre.

There are many different claims as to who invented the drink (some say it was invented in Radio City in C/ Santa Teresa) but most people seem to agree that it all started at the now defunct ‘Cervecería Madrid’ (just off C/ San Vicente). So the story goes, back in 1959 when Cervecería Madrid was a smoky little piano bar, some of the regulars were from the Basque country. They were continuously harping on about the joys of their homeland and whenever they ordered the best house cava, they called it “Agua de Bilbao”. One night, sick of their boasting, the owner declared, “Tonight we’re having Agua de Valencia”, and he concocted the lovely Levantino liquor there and then. It quickly became the house speciality.

It later spread to other bars in the Barrio del Carmen in the early ‘70s, made popular by the (champagne) socialist hippies towards the end of the dictatorship who used to enjoy a glass of Agua de Valencia when they weren’t dodging the ‘grises’ (armed police) or watching the umpteenth screening of Eisenstein’s ‘Battleship Potemkin’.

Then there is the old and not very hilarious joke, “If Agua de Valencia is this good, it’s no surprise that there’s no water left in the riverbed”. It would probably be wise to wait until everyone’s had a few glasses of the stuff before you tell that one, though.