You are here: Home  /  Places  /  Inauguration of the Greek Honorary Consulate in Valencia on May 17th
Places 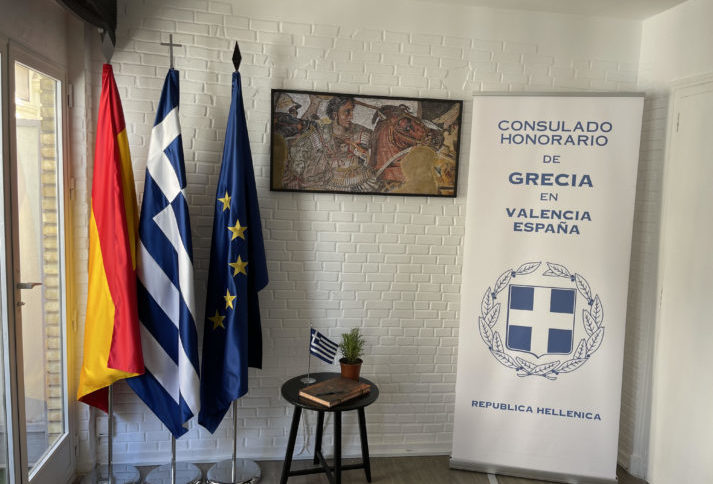 Inauguration of the Greek Honorary Consulate in Valencia on May 17th

The inauguration will take place in the presence of His Excellency Ilias Fotopoulos , Ambassador of Greece in Spain, and His Eminence the Metropolitan of the Greek Orthodox church in Spain and Portugal, Exarch of the Mediterranenan Sea, Monsignor Byssarion. The event will take place on May 17, 2022, from 16.00h to 19.00h at the Ateneo Mercantil, Plaza del Ayuntamiento, Valencia.

AGENDA FOR MAY 17th

❖ ❖ 15.30 Religious ceremony (Sanctification) at the offices of the Greek Honorary Consulate by His Eminence the Metropolitan Archbishop of Spain and Portugal, Exarch of the Mediterranean Sea, Mgr. Vissarion .Address Calle Cotanda 2, 7o, pta 16, 46 002 Valencia

❖ 16.15h Screening of the taped religious ceremony in the Consular office (extract)

❖ 16.20h Speech-Greeting by Mgr. Vissarion, Metropolitan Archbishop of Spain and Portugal, Exarch of the Mediterranean Sea

❖ 17.00h Speech “The Greek business in the Comunidad Valenciana and Spain” by Mr.Andreas Pappas, President of the Spanish-Hellenic Chamber of Commerce

❖ 17.30h Speech, “Relations between Greece and Finland, particularly in the field of Intellectual Property within the EU” by Mr. Jorma Hanski, Chairman of the Administrative Board of the EUIPO, Director in the Finish Patent and Registration Office(PRH).

❖ 17.50h Speech, “The Greeks and the Iberian Peninsula in Antiquity”, by Mr. Alejandro Noguera Borel, Director of the Instituto Valenciano de Estudios Clásicos y Orientales and of the L’Iber Museo, Valencia

❖ 18.00h Concluding remarks and thanks – Closing of the Conference by the Honorary Consul Dr. Théophile M. Margellos

❖ 18.05h Performance of the national anthems of Greece and Spain