You are here: Home  /  History  /  Internationally-renowned ‘TED Talks’ platform discovers where the Holy Grail is in Valencia!
History 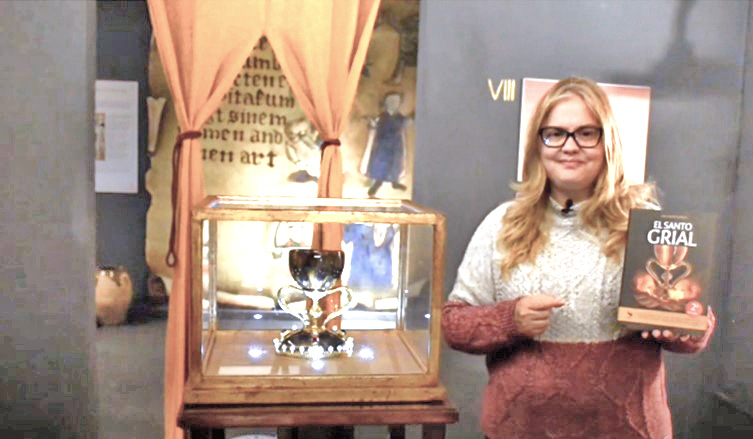 Internationally-renowned ‘TED Talks’ platform discovers where the Holy Grail is in Valencia!

#The prestigious North American platform with more than 30 million followers on Youtube has published for the first time in its history a conference dedicated to the Holy Grail.

Dr. Ana Mafé García, a world expert in the protohistory of the Holy Grail, is the protagonist of a video in which she explains the travelling journey of this relic from the city of Jerusalem to its arrival in Valencia, passing through Rome.

This space has remained open throughout this II Jubilee Year of the Holy Chalice thanks to the municipal subsidy obtained by the Cultural Association ‘The Way of the Holy Grail’ with the agreement with the Department of Tourism of the City Council of Valencia and Visit Valencia for a total of 36,000 €. This amount has been donated in its entirety to the company responsible for its opening. Doña Alicia Palazón has managed with great effort to keep its doors open, the ‘Aula Grial’ (Holy Grail museum near the Cathedral of Valencia) to welcome pilgrims and the curious during this Jubilee Year.

TED was the brainchild of Richard Saul Wurman, who founded the organisation with Harry Marks in February 1984 in the form of a conference; a conference that continued on an annual basis until 1990.

More than 1000 TED Talks are available online for free viewing and downloading. As of March 2011, the talks have been viewed more than 400 million times and have been translated into 80 languages.

“The Way of the Holy Grail to Valencia” is a TEDx talk by Dr. Ana Mafé García. Her academic curriculum is very extensive: Technician in Tourism Companies and Activities (TEAT), Masters in Environmental Tourism Management: Ecotourism by the UPM, graduated in Art History, Master in Art History and Visual Culture and PhD in Art History Cum Laude with International Mention. She chairs the International Scientific Commission for Holy Grail Studies and is president of the Cultural Association The Way of the Holy Grail. Her doctoral thesis is published by the prestigious American publisher PROQUEST and became the book The Holy Grail. The proceeds from its sale go entirely to the Asociación Cultural El Camino del Santo Graal. You can find it on Amazon.

The Way of the Holy Grail, the Route of Knowledge, the Way of Peace is a tourist, historical and cultural route that links the Pyrenees of Huesca with the city of Valencia, crossing the entire autonomous community of Aragon from north to south.

It is the new Way of St. James (‘Camino de Santiago’)of the 21st century that must be followed by all adventurers who want to discover where the Holy Grail is, the Hebrew cup of blessing that gives eternal life… according to literary texts.

TEDxSaguntoStudio has produced its first video of a TEDx talk for the international TEDx Talks platform, which has more than 30 million subscribers. Dr. Jose Gregorio Lepervanche Valencia, head of TEDxSaguntoStudio is Professor of Business Administration and Information Systems at Florida State College at Jacksonville (FSCJ) and Colorado State University Global. He is the founding organiser of TEDxFSCJ and TEDxSaguntoStudio.

Torres Torres has as main elements of its historical heritage the ruins of the medieval castle and the Arab baths. The landscape that accompanies the Way of the Holy Grail, the Route of Knowledge, the Way of Peace until reaching Sagunto is surrounded by irrigated fields. In the middle of the valley runs the river Palancia crossed by a Roman bridge. In the distance you can make out the waters of the Mediterranean Sea.

Sagunto, an ancient city, also forms part of the cities that follow the Way of the Holy Grail in the province of Valencia. The Ermita de la Sang has a replica of the Holy Grail from Valencia Cathedral and a fresco on the ceiling depicting this relic. The whole town is surrounded by a wonderful medieval castle.

Massamagrell is the last stage of the route before reaching Valencia Cathedral. It has a marvellous monastery with one of the most visited libraries by researchers from all over the world, three museums and a Christian temple with more than four hundred years of history. Emperador is the first municipality to signpost this route with wonderful Valencian socarrats where you can see the distinctive sign of the Way of the Holy Grail.

The Holy Grail celebrates a Jubilee Year in perpetuity every 5 years. It is located in the Chapel of the Holy Chalice in Valencia Cathedral. The next Jubilee Year will start on the last Thursday of October 2025.

To get to know the Holy Grail and its path we recommend watching this video https://youtu.be/N7izgVk0P_g

It shows a production by Visit Valencia in which an actor reinterprets the fictional character of Indiana Jones in a thrilling adventure in search of the Holy Grail. A video that has already won international awards and positions the city of Valencia as a “Holy Grail destination”.

A video that invites you to get to know and to travel. To get excited and to think that the human being has a whole path to discover on the Way of the Holy Grail, the Route of Knowledge, the Way of Peace.

We are grateful to the Diputación de Valencia for the means it has made available to the Asociación Cultural El Camino del Santo Graal to make the Holy Grail known throughout the world via this North American platform. Soon, we hope to be able to add the English translations so that it can be visited even more.

As Dr. Mafé says “We invite everyone to walk, ride a horse or a bicycle to get to know the Holy Grail, the most sought after relic of the Western Middle Ages. The Hebrew cup of blessing that Jesus held between his fingers and in which he left us all his love by recalling his memory.”

Don’t forget to visit these links:

TED Talk on You Tube: https://youtu.be/N7izgVk0P_g

The Way of the Holy Grail: https://www.caminodelsantogrial.org/