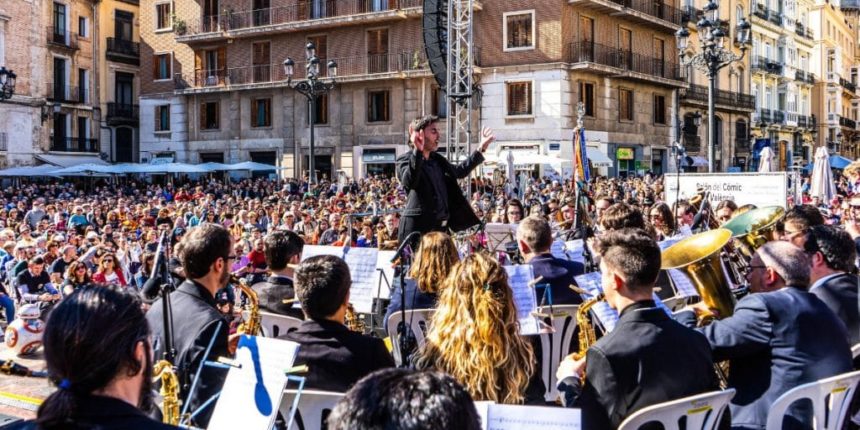 #The next edition of the Valencia Comic Fair 2022 is taking place next week March 4-6, the Fair is working alongside the Valencia City Council’s Department of Cultural Action. As a prelude to the big event, a free concert of  hits from  soundtracks from ‘Superhero’ Films  is being held in the Plaza de la Virgen on Saturday 26 February, from 12:00h to 14:00h.

The music this coming Saturday afternoon will be provided by the Agrupación Musical Carrera Fuente de San Luis, conducted by Didac Bosch and over 60 musicians. You are guaranteed to hear music from the soundtracks of Star Wars, Harry Potter, The Incredibles, Robin Hood, Frozen, Mission Impossible, James Bond and Aladdin, among others.

The organisers of the concert are encouraging people to dress up as their favourite superheroes as the event will also feature cosplayers from the Obi Wan Club, creating perfect photo opportunities.

The Valencia City Council’s Councillor for Cultural Action, Maite Ibáñez, will be hosting the event this Saturday, alongside the organisators of the Comic Fair.

The following weekend, Valencia Comic Fair promises to transport you to the world of graphic novels, with the attendees including over 211 exhibitors, 20 publishers, 80 artists, and 120 writers from both Spain and abroad.

The most anticipated guest of this year’s comic fair is bound to be, Brian Azzarell, a famous American comic artist who came into prominence with his crime series 100 Bullets, published by DC Comics. You might have also come across his more recent work such as The Dark Knight Rises or Watchmen (prequel to Before Watchmen) which he is the author of.

Also, coinciding with the celebration of the Valencia Comic Fair, the third edition of the Valencia Fantástic Festival will take place. The Festival has organised many screenings, as well as panels with actors and directors, which will begin on the 25 February until the exhibition is held at the ABC Park cinemas.

To find out more about this out-of-the-world experience, please go to https://entradascomicvalencia.feriavalencia.com/login/inicio.