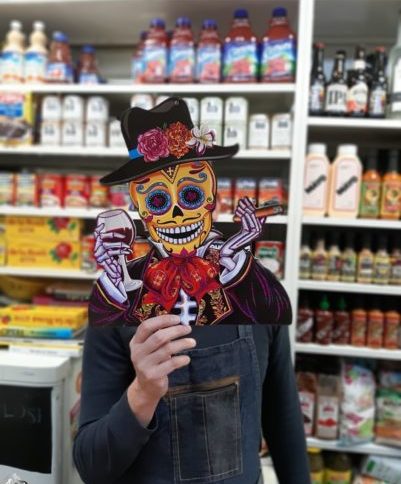 MEXICAN ALTAR OF THE DEAD AT ‘RUZAFA MARKET’ UNTIL NOVEMBER 7th

##The Mexican tradition of the ‘Altar of the Dead’ (ALTAR DE MUERTOS) arrives at the Ruzafa Market of Valencia.

This Mexican tradition, a product of indigenous syncretism and European religious beliefs, pays homage to loved ones who have departed.

-The Altar can be visited from today until November 7th at the 52-53 stop of the Ruzafa Market within its official hours and with all the official security protocols to prevent covidism.

-It is dedicated to Doña Pilar, a Mexican of Spanish origin, an assiduous and beloved visitor of the market.

The Altar of the Dead, one of the most deeply rooted Mexican traditions, arrives for the first time at the ‘Ruzafa Market’ of Valencia with all the elements that make it an indispensable ritual to remember those loved ones who have departed.

The colorful papel picado, pan de muerto, the yellow cempasúchil flower, the images of the deceased and the candy skulls are some of the elements that make up this ritual element, which can be visited as of today at the 52-53 stop of the market from Monday to Saturday from 8:00h to 15:00h, respecting all official measures to prevent the spread of covid.

The Altar of the Dead is a fundamental element in the set of Mexican traditions of the Day of the Dead, which consists of honouring those who have departed, with an offering composed of food, flowers and objects of daily use of the deceased.

Its origin is the result of the syncretism of prehispanic ideologies, the cosmovision of Mesoamerican cultures and European religious beliefs brought by Spanish conquerors and missionaries, whose mission was the colonization and conversion of the native peoples of the current territory of Mexico.

The celebration dictates that on the 1st of November, Day of the Dead, the dead return from death to enjoy a happy reunion with their loved ones, with the promise of being reunited in the beyond, when the time comes.

Michel Reséndiz and Manolo “Señor Mezcal”, owners of “La Despensa de Frida”, a store specialized in selling Mexican products, are behind this project, which has the support of the Ruzafa Market Vendors Association.

Reséndiz, a native of Tijuana, northern Mexico, and a resident of Valencia, explains that the death of Doña Pilar, a regular and beloved visitor to the market, was the trigger to set up this altar with which they intend to honour her.

Doña Pilar, daughter of Spanish immigrants and born in Mexico City in 1941, moved with her family to Valencia in 1972 and in this city she managed to reconcile her love for her Spanish roots with her enormous attachment to her place of origin through cooking, So her daily routine consisted in walking the corridors of the Ruzafa Market visiting its stops to season its culinary mix, at the same time she wove important ties with the merchants, who want to remember her through this manifestation that is a syncretic practice between pre-Hispanic customs and colonial heritage.

According to the owner of La Despensa de Frida, this altar is also a way of thanking the neighborhood for its loyalty, its warm welcome and its concern to continue supporting local commerce, which is one of the sectors to be most affected by the covid pandemic. Besides being a way to make this Mexican tradition known in the most faithful way possible.
“We like to give life to the neighborhood. No matter how touristy it is, my daughters have grown up here. It’s a tribute to the place that has welcomed us and where my temple of work is located,” adds Reséndiz.

Although the altar will be dedicated to Doña Pilar, the organization invites all those who wish to place images of their loved ones to join this collective celebration in which once a year the two worlds meet, those who left and those who are still on earth.

“We all have someone to remember. The dead do not leave until we forget them. They’re still there and won’t leave as long as we have them in our memories,” Reséndiz concludes. 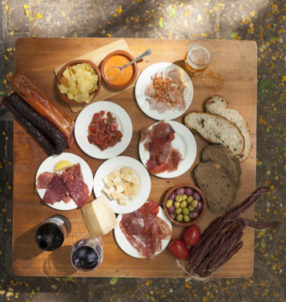 TAPAS IN THE PARK! ‘OLI BAR’ OF RUZAFA