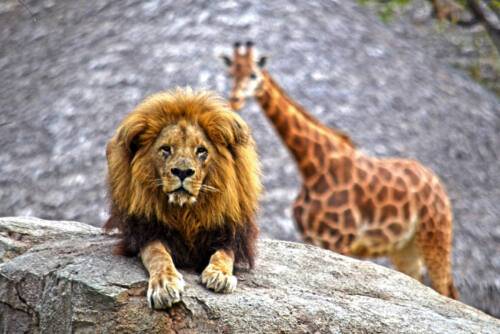 ##Built as part of the Cabacera park development at the Mislata end of the Turia river bed, the Bioparc opened in 2008. It is a new-generation zoo where the idea was to move away completely from the bad old days of the ‘Viveros Gardens’ enclosed zoo, embracing the philosophy of “zoo-immersion” in line with other developments  around the world like ‘Orlando Animal World’ and the ‘Singapore Zoo’.

The idea with Bioparc Valencia has been to create large spaces for the animals, which represent different African environments using clever design and indigenous plants and trees. As far as possible this recreates their natural habitat, mixing animals which would naturally cohabitate in the wild (avoiding mixing natural predators with their prey of course, the lions and leopards each get their own area). All of which means the animals are happier and healthier and we get to feel that we are experiencing something approaching what seeing these animals in the wild would be like. Also, we are visiting their environment rather than them becoming part of ours.

However, this is still a zoo and all the issues about keeping wild animals in captivity for our enjoyment remain, but in terms of the welfare of these animals it is clearly a vast improvement on what went before and the commitment of the park to wildlife protection means that part of the ticket price goes to worldwide animal conservation. For the most part, the feeling as you are walking around is that the animals have all the space and you are just getting the chance to briefly observe them and enjoy them without intruding too much. You can have a beer on the restaurant terrace looking out on Zebras and exotic birds. They are completely unbothered by your presence to the point that they don’t seem to even realise you are there.

The park stretches over 100,000 square metres and has more than 4,000 animals of 250 different species that is dedicated entirely to Africa, divided into different areas and habitats. Areas concentrating on Asia and the Americas are planned but, given the present economic climate, they are unlikely to appear in the near future.

The Madagascar zone, like the island itself, is separated off from the rest of the park. It is the only part of the park where you walk amongst the animals themselves, lemurs running and jumping around you as you wander along the path, which winds through the enclosure.

The Equatorial Africa zone in which you walk through what looks like a huge dark tree trunk and it has crocodiles, tortoises and boas. The Niger Delta area has hippos, mandrill baboons, otters and ducks living together amongst dark sand pools and indigenous trees.

There is an area dedicated to the green mountain forests of Ethiopia with fierce-looking leopards and, in a separate enclosure, chimpanzees and cranes and another area representing the valleys of the Congo with its buffalos and pelicans and Gorillas who sit and look at you disinterestedly through the glass. The Kitum cave area (named after the famous caves in Kenya partially “mined” out of the rock by elephants in search of salt) allows you to observe the animals of the great lakes of Africa, its hippos, Nile crocodiles, fish and turtles, from above and below the water.

There is a huge, dusty elephant area with tall rock faces and man-made Baobab trees and a pool where the elephants swim which can be quite spectacular if they happen to fancy a dip while you are there. Meerkats (surely everyone’s favourite), mongooses and porcupines each also have their own enclosure.

The largest area of the park is dedicated to the Savannah with its giraffes, Zebras, rhinos and antelopes all roaming together and up above and separated by huge rocks, the lions. The Savannah area is at the centre of the park and you can walk all the way around it, the path leading you from ground level to where the restaurant is situated, to up above at the level of the lions where you can look down at the giraffes who come up close to get to the grass at the top of their enclosure.

Despite all this, the park has never achieved the number of visitors it originally hoped for when it was built. Initially,   the park expected 650,000 visitors a year which would rise to a million in successive years; the reality has been that they have not yet reached that target. Ticket prices are 23.80€ for an individual adult ticket and 18€ for children. If you live in the city, it’s well worth getting an annual pass, which works out only slightly more than the one-off price allowing you to come and go as you please to a place which definitely merits successive visits.

This is a huge, respectful and more dignified improvement on what went before and the philosophy of the Bioparc means that Valencia has a zoo which puts many similar institutions to shame.