You are here: Home  /  Places  /  Oceanografic of Valencia (THE CITY OF ARTS AND SCIENCES)
Places 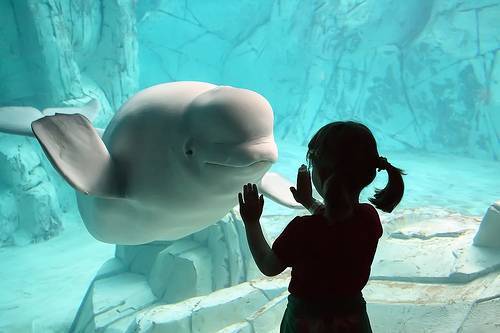 Oceanografic of Valencia (THE CITY OF ARTS AND SCIENCES)

##In the hustle and bustle of the city of Valencia, sometimes it’s nice to take a break and imagine a more serene world. There’s no better place to do that than at the Oceanogràfic.

The Oceanogràfic is Europe’s largest aquarium and it’s located right alongside the City of Arts and Sciences in Valencia. The aquarium is divided into 11 habitats and is home to 45,000 animals of 500 different species.

The largest habitat at the Oceanogràfic is the Oceans. Here, you can walk through a mesmerizing tunnel that holds seven million litres of water and represents a journey through the Atlantic Ocean from the Canary Islands to the Bermudas. While travelling through this tunnel, various species of sharks and rays swim next to and above you – close enough that you feel you could touch them.

In the Temperate and Tropical Zones, one can find species that live in seas spanning from the equator to the polar circles. The entrance of the Temperate and Tropical Zones is home to an outdoor seal exhibit that represents the rocky shores of the Atlantic Ocean. Once guests walk past the seals, they will enter a room that contains algae from the northern California region and the seabed of the Izu peninsula. Here, the Temperate Tunnel begins – one that stimulates the underwater journey from Europe to America through the Atlantic Ocean. At the end of the Temperate Tunnel lie five tanks of deep blue sea creatures and various aquariums filled with jellyfish, sea horses, ctenophores, eels and pipe fish.

After the Temperate Tunnel, guests reach the Tropical Room – one that is nothing short of breathtaking. The ceiling of the room is designed as the keel of a boat, which enhances the feeling of being underwater. Guests are surrounded by panoramic aquariums filled with colourful coral, fish and eels from the Indo-Pacific and Caribbean Sea. These aquariums hold thousands of fish – watching them swim around each other and through the nooks and crannies of the coral is hypnotizing. One can easily observe these brightly coloured sea creatures for long enough to lose track of time.

In the habitats that represent the Poles, guests first enter the Antarctic, where they can watch a colony of penguins play on rocks or swim under water. After the penguins lies the entrance to the Arctic – a huge igloo with the constantly-changing Aurora Borealis on the ceiling. The Arctic exhibit is home to walruses and beluga whales and is divided into two stories so guests can watch the large mammals from both overhead and underwater perspectives. Outside the igloo, two Aldabra Tortoises reside, the second-largest land turtles in the world.

The Red Sea Auditorium, the biggest 4D aquarium in Europe, surrounds guests in an interconnection of coral reefs from the Red Sea – a relatively small sea between the Arabian Peninsula and Egypt. Nearby, the Mediterranean habitat consists of nine aquariums that are home to 7,400 specimens of fish and invertebrates native to the Mediterranean Sea. Amongst these species are flora and fauna, octopus, spider crabs, sea cucumbers, sea urchins and star fish, just to name a few.

Guests can also be entertained by sea lions in the Islands habitat, watch birds in the Wetlands sphere, observe crocodiles in the ‘Crocodilary’ or study butterflies in the Butterfly Room.

And just in case wandering throughout the Oceanogràfic and admiring the animals who hardly know they are being watched isn’t enough, the park also offers dolphin shows. In the Dolphinarium, the largest in Europe, audiences can watch an entertaining and educational show as bottlenose dolphins flip through the air and interact with their trainers.

The Oceanogràfic is one of Valencia’s biggest attractions and it’s easy to understand why. People of all ages find themselves entranced by the beautiful animals that call this place home.