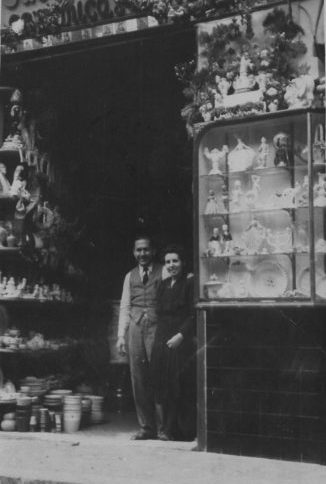 The group of vendors who worked in the Plaza was always divided into two subtly differentiated groups, imperceptible to outsiders. On the one hand, there were those who carried out their activity in the shops on the ground floor of the buildings that make up the square and, on the other hand, those who worked in the stalls of the municipal market that occupied the interior of the square. The former either owned the premises or rented them out, while the latter rented the space they occupied on the public street from the City Council for a small fee.

In general there was a good relationship between them, with some exceptions, as is normal among the members of any community; there were cordial relations of good neighbourliness and even real bonding which did not, however, avoid the aforementioned division of sorts. It must be said that the shopkeepers used to look down, to a certain extent, on the merchants who worked in the paradas.

The “parada” was a wooden box about 3m long by 1.5m wide and 2m high, with four iron wheels firmly fixed to its base. On one of the narrow sides of the box was the access door and one of the wide sides was split lengthwise in half, the parts joined by solid hinges, which allowed the box to be opened to the outside and, once legs had been installed, to form the counter of the shop. On this, the merchant would spread out his or her merchandise, leaving the inside of the box as a living and storage area.

At the end of the day, the merchant would gather everything inside the cart, roll the key in the lock of the door and go home. The carts remained in the square until the “colla des carros” arrived at dusk. This was made up of a handful of men, who supplemented their income with this work, and who were in charge of pushing the carts to the ground floor of the Hostal la Corona, in the nearby Carrer dels Assaonadors, where they were kept until the following day, and from where, before eight in the morning, they returned to the square thanks to the strength of this group.

Some nights, in the summer, my father would give me permission to “help” the group to take the carts to the hostel. I always went with Manolo, pushing the cart assigned to him; he was a good man, a neighbour of the Plaza Redonda, who unfortunately ended up in a bad way because of alcohol…..

I don’t remember much about this inn, not much more than that at the entrance there were a couple of large stone arches, apparently of medieval origin, under which the carts were kept. On some occasions, the donkeys and goods of the Extremaduran sellers from Salvatierra de Barros, who came every year to sell their burnished red earthenware jugs in our town, were also housed in this “car park”.

The Hostal de la Corona was demolished in the 1990s, to build the “magnificent” building that houses the ADEIT, an institution linked to the University of Valencia. This being the case, they could have made an effort to conserve that heritage… but it seems that the passion for destroying everything old (confusing old for old) invades even the highest spheres of culture (and also politics) in this city.

There is a document of great value in which one can see, for a few seconds, what the Plaça Redona looked like before 1975, the year in which the first reform was undertaken with the replacement of the carts by fixed stalls. This is a British film called ‘The Boy who Stole a Million’, shot in 1960 and directed by Charles Cripton. At minute 28:28 of the film you can see, in the left background of the scene, our family’s shop. Below is the link of the film, which  was shot on location in Valencia. In addition to the Plaza, you can also see other characteristic spaces of the Valencia of yesteryear.  I hope you like it. See you next time!

Title and link to the film ‘The Boy Who Stole A Million’: https://www.youtube.com/watch?v=zx-aTAliWkQ

Plaza Redonda photo: “My grandparents outside the ceramics shop in the 1930s.”

Valencian artistic pottery shop, since 1860. Traditional pieces painted and handmade in Valencia. A wide range of plates, tiles, jugs… and all of them reproductions of medieval, 17th, 19th and modern ceramics. Family-run business dedicated to the sale of handmade ceramics: works to order, reproductions of Alcora ceramics from the 18th century, Valencian ceramics from the 19th century, Socarrats, Paterna ceramics, Gothic blue, collection jugs, porcelain, alabaster. A wide range of ceramics, both to give as a gift and to decorate your home.