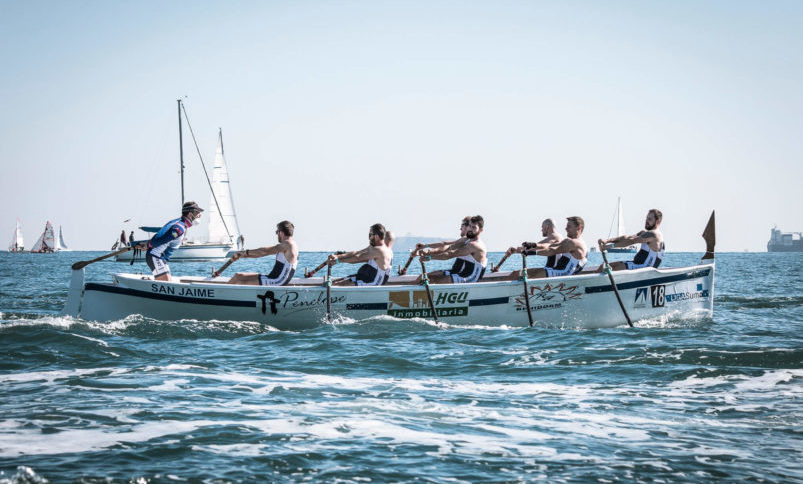 #The beaches of Pinedo and l’Arbre del Gos, next to the Valencia Marina, witnessed last Sunday 16th January the celebration of the III Regata Liga SUMA Banco Fijo del Mediterráneo. It was a rowing event that counted with the participation of nearly 250 athletes belonging to the youth, absolute, mixed gender and veteran categories. The weather conditions were good and the rowers put on a great show in the regatta that opened the year for regional rowing.

The event started at 9:30 in the morning with the start of seven boats in the men’s veteran race, where the victory went to Club Rem Dénia, who crossed the finish line with a time of 22 minutes and 38 seconds, once the compensation was applied. They won in a tight finish against Club Náutico Benidorm, as the difference in the finish line between the two teams was only six seconds. The Club Náutico Alicante Costa Blanca team completed the podium. Club Náutico Benidorm won the women’s race, with a final time of 24 minutes and 53 seconds. Real Club Náutico Gandía was second and third place was reserved for the Club Rem Denia boat.

The absolute race started at half past twelve in the morning, in two heats that had a main protagonist, the host club Real Club Náutico Valencia, who won both the men’s and women’s races. The winners of the men’s race stopped the clock in 23 minutes and 21 seconds, ten less than the second classified, Secció Esportiva Universitat d’Alacant. Real Club Náutico Gandía finished in third position. The women, for their part, came first with a time of 25 minutes and 15 seconds. Club Deportivo de Mar Clot de L’illot El Campello and Real Club Náutico Calpe finished second and third respectively. In this way, the two absolute representatives of Real Club Náutico Valencia consolidate their position at the top of the general classification of the SUMA Mediterranean Fixed Bench League, as they also won the previous regatta.

The next event of this competition will also be held in Valencia on Sunday 7th February, where the clubs will have another opportunity to show their potential and offer another great rowing spectacle.