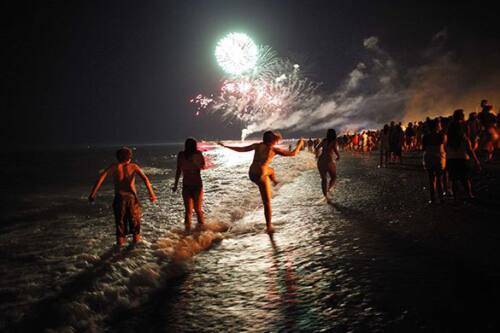 ##More than 400 years ago Lope de Vega wrote “Salen de Valencia, Noche de San Juan, Cien coches de damas, Al fresco de la mar”. On the night of the 23rd June, Valencians all over the region will be celebrating San Juan…but in 2022 and not 2021 as the local government has banned beach parties due to the coronavirus. In a normal year, the biggest parties are a day later down at the Postiget beach in Alicante but, as you know, the city of Valencia is never backwards in coming forwards if there’s a fiesta to be enjoyed, especially if it includes fire and maybe even a few fireworks.

In Valencia everything is centred on Malvarrosa and Las Arenas so prepare yourself (in 2022) for a one-night-only “Fallas on the beach” with a taste of ancient mysticism celebrating the four elements. You may spend the whole night trying to get down there which can be a nightmare unless you are within walking distance. Expect huge traffic jams and nowhere to park. From the centre the best way is to cross the river from the Torres de Serranos and squeeze yourself onto a packed tram at the Estacion de Madera or take Line 5 on the Metro and change onto the tram at Serreria-Maritime.

In 2022, you can join up with the literally hundreds of groups of people building their own bonfires in a vast, open-air party on the sand. When the clock strikes twelve, everybody rushes into the sea for a midnight dip while a bunch of lunatics dressed as wizards (usually drunk on queimadas and ancient medicinal “herbs” ) throw flowers into the water, muttering strange incantations to invoke the maritime spirits. On this night of the year, at least, that soggy thing your hand touches while swimming in the Med might be a rose petal rather than a crisp packet or a jelly fish or something infinitely more disgusting. You won’t be just floating about on your back, though. Directed by the eccentric bloke in the pointy hat, you will have to jump seven waves if you want good luck for the next year and nine if you want to get pregnant (that one only works if you are a woman).

After the nocturnal bathing don’t bother with a towel, the traditional way to get dry is to jump another seven times (it’s always seven isn’t it?) over a bonfire. This being Valencia, of course, some families not wishing to waste good firewood… stick a paella on the top so be careful to look what you’re jumping over. The traditional Valencian dish is best enjoyed without a sandy footprint in the middle.

Tradition has it that San Juan is the opposite of Halloween. In both festivals the doors to the Spirit World open but while Halloween is the time for evil spirits and witches to roam the Earth, San Juan, being the longest day of the year in the Northern hemisphere, is when the powers of Darkness have their weakest hold over the world. It’s the Spirits of light that are around in the Water, Fire, Earth and Air granting wishes and ensuring fertility and a bumper harvest (which sounds pretty good to me). Unless you’ve been sampling the wizard’s herbs, however, most of the Spirits you’ll see will be brought in plastic Mercadona bags… by the hundreds of folk adhering to the ancient Valencian custom of the “botellón” or bought in the verbenas and beach bars that spring up all along the promenade. Caipirinhas and Queimadas are enjoyed to the sound of loud Spanish pop music from the disco mobiles, contrasting with the whisky and Fanta lemon or vodka and Red Bull and the sound of strummed guitars and bongo drums around the bonfires.

The festival of San Juan has its origins in the Christianisation of the Roman festival of the goddess Minerva. This in turn originates from ancient Norse and Celtic festivals, marking the Summer Equinox and the harvest and planting season. One such was the festival of Alban Hervin, a Nordic wizard who could, amongst other things, ward off disease, bring you strength in battle and bestow horrible stomach complaints on your enemies (a good man to know in a crisis I should think). The tradition spread down through Germany and Celtic Britain and Ireland to Ancient Greece (the feast of Hefesto) and Rome. It was then adopted by Christians as, by some strange coincidence, it happened to be John the Baptist’s birthday, exactly six months before Christmas. Nowadays, bonfires will be lit on this very night from the cold wastes of Chilean Patagonia where it’s the beginning of winter to Cork in Ireland where they also have a beach-based festival but swap the Caipirinhas for pints of Murphy’s.

For Valencians, San Juan means the start of summer. Spain’s about to close down for a couple of months (and given the present economic climate, who knows if it will open up again in September!). School’s out and students have been known to burn their books and notes in the San Juan fires. From this point on we have well and truly reached a time of year when the focus moves away from the city centre and people look to the beach for their entertainment, a time when it’s perfectly OK for Valencians (not just guiris who’ve been wearing them since February) to wear shorts on any occasion and a time when Spanish telly, believe it or not, gets even crappier . The long Spanish summer holidays mean that, for many, San Juan evokes a much stronger feeling of an end and a new beginning than, say, New Year’s Eve. The Equinox, a fresh start, a turning point. Whether you’re a Druid courting the favour of the spirits of the field, Saint John the Baptist washing away sins or just someone who’s saying “Summer’s here. Let’s party!”… San Juan taps into something universal that spans cultures, religions and centuries right back to the dawn of our existence.

Due to the coronavirus, there are no beach parties allowed for San Juan in Valencia in 2021. Don’t forget your flip flops for San Jaun in 2022! 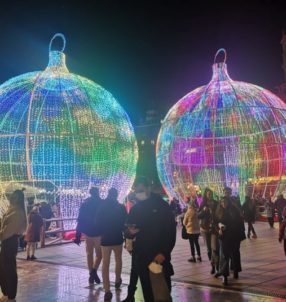