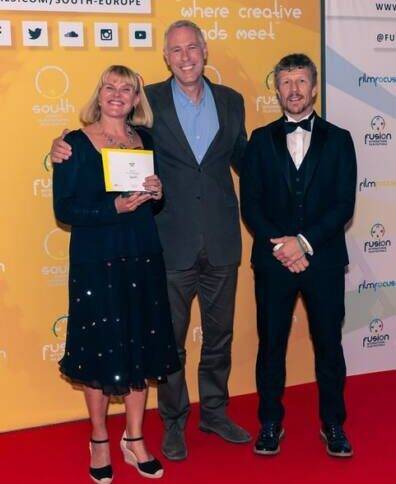 ##HOW DO YOU FEEL ABOUT ‘SOLO!’ WINNING THE BEST FILM AT THE ‘SOUTH EUROPE INTERNATIONAL FUSION FILM FESTIVAL’ IN VALENCIA?

Valencia had already become a very special place to me. It was the city I flew in and out of when we came for the shoot of SOLO! and where we spent several meetings before and after the shoot. It was the place where we found many of the student crew who did such an exceptional job on our film and where we met some of our key cast, including the wonderful Jaimie Pujol. SOLO! is ultimately a film about community. In the short time we were shooting in Barx, we were totally embraced by their own incredible community, giving us an experience I doubt will ever be equalled. It opened my eyes to a side of Spain I had never seen. Winning the Best Film award in Barx’s nearest city feels like a wonderful finish to our journey.

Whatever anyone says, awards are lovely!  SOLO! has now been lucky enough to have won a few, and what I love most about them is how it brings the team back together again – even if not everyone can be there on the night, suddenly all our inboxes are full of cheerful emails and memories and arrangements to meet up again soon: a resurrection of the joyful spirit that suffused the whole shoot and that embodies the finished film.  The only thing better than an award is an award from a festival that is truly passionate about independent film – and especially one in our home city Valencia.  Who needs an Oscar?!

Valencia is our home city in Spain, only an hour from the village where we live and that inspired SOLO!  We didn’t know Valencia at all before we moved here but now we absolutely love it and can’t believe our good fortune that it’s so nearby.  If ever I go awol, look no further than the bar in the Central Market, where I’ll be eating my favourite sandwich EVER (the Canalla) and marvelling at my surroundings.  To win Best Film here therefore had a really personal meaning and was an honour for all of us involved in the film.

It was a huge honour to win Best Film at ‘South Europe’ – it’s beautiful to see it engaging with so many people in its true homeland – Valencia. It comes as no surprise given the warmth and generosity of all the people we met at every turn when filming this feature. In my experience it’s rare for a film to strike such a chord and it’s every actor’s dream to be a part of something that resonates across Europe and England alike.

Winning the ‘Best Cinematography’ award in Valencia is a dream and I feel particularly honoured to know that the judges thought we did justice to the beautiful region and people of Valencia. Filming in the village of Barx and surrounding area was really a joy.  Everywhere I pointed the camera was beautiful scenery, perfect locations and village residents who not only helped us, but also featured heavily in the film.  The light has a certain quality in the mountain areas that you just don’t see in any other part of the world and this brought the right atmosphere to tell our romantic tale.  Finally, it must be noted that many of the camera team were made up of final year students from the University of Gandia so this award, from their home region, is as much for them as for me and the film.

You can see the film (with the option of Spanish subtitles) via these links: