You are here: Home  /  Editorial  /  Food  /  THE AWARD-WINNING CHEF WHO MADE HIS NAME IN THE VALENCIA REGION OPENS A NEW VENTURE IN MADRID…
Editorial 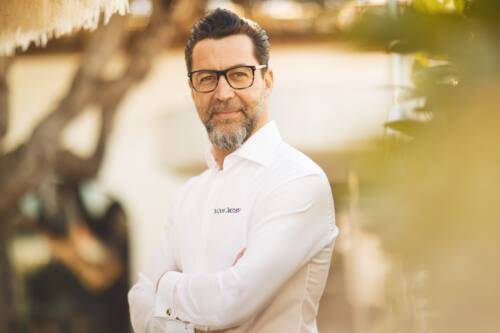 ##Quique Dacosta, chef and winner of three Michelin stars, will be the culinary manager at the new Mandarin Oriental Ritz, Madrid, which opens its doors this summer. After the greatest restoration in this emblematic hotel’s 110 years of history, the luxury multi-national hotel is entrusting the creation and direction of its culinary department to one of the best chefs in the country.

Dacosta, who in the latest publication of the Michelin Guide earned the second star at El Poblet (Valencia), in addition to the 3 stars from Quique Dacosta Restaurante (Dénia), and has been named Best Businessman in the Spanish Restaurant Industry by the Royal Academy of Gastronomy, will design, develop and direct the food at the five restaurants and bars in the hotel.

Under the spectacular reclaimed glass dome, we find the Palm Court, which houses a restaurant with classic cuisine. In the upper part, afternoon tea will be served. At the Ritz Bar, one can enjoy a cocktail in the most cosmopolitan environment in the city. In the famous renovated hotel garden, the Ritz Garden, which has street access, the chef will be offering his most relaxed, fresh and dynamic version. One of the most exclusive aspects is the Champagne Bar, for only twelve guests. The hotel’s insignia restaurant offers cuisine more committed to the art of food, marked by the chef’s culinary style. The selection here is entirely different from the food created every year at Quique Dacosta’s three Michelin-star restaurant in Dénia.

What’s more, the hotel houses the Philip IV Hall and the Royal Hall to host any sort of event, for which the chef has designed a different selection for each occasion.

“This is an exciting challenge for me. Madrid is a city I feel a great deal of affection and respect for. We are creating both a solid and an ambitious project for the city, pouring our enthusiasm into it. I’m very moved by this opportunity to work on developing one-of-a-kind experiences in an emblematic location, a national and international leader, a hotel entirely open to the city of Madrid,” asserted the chef.

“His passion for offering much more than a culinary experience, with his sense for creativity and unique character, is a perfect match with our zeal to completely satisfy our guests,” stated Gérard Sintès, General Manager of the Mandarin Oriental Ritz, Madrid, in referring to Quique Dacosta.

Since it opened its doors for the first time in 1910, the old Ritz Hotel has been synonymous with luxury, comfort and excellent service. Over the years, it has welcomed royalty, politicians, corporate leaders and international celebrities. It is an integral part of society in the Spanish capital. It is located within the “Golden Art Triangle,” an area mapped by the city’s most important museums: the Prado, the Thyssen-Bornemisza and the Reina Sofía Museum of Modern Art.

Quique Dacosta is owner and chef at his restaurant with the same name in Dénia (Alicante). He has been awarded on two consecutive occasions as Best Restaurant in Europe, and in recent years, has been included amongst the ten best restaurants according to the prestigious list Opinionated About Dining. Recently, he has initiated large-scope projects, such as his new catering division all around Spain, the exclusive space Eventos, Flora Fauna y Primavera, and the international ArrosQD located in the heart of London, in addition to his already firmly-established restaurants in the city of Valencia.