You are here: Home  /  Places  /  The City Council of Jaca will promote the ‘Way of the Holy Grail’
Places 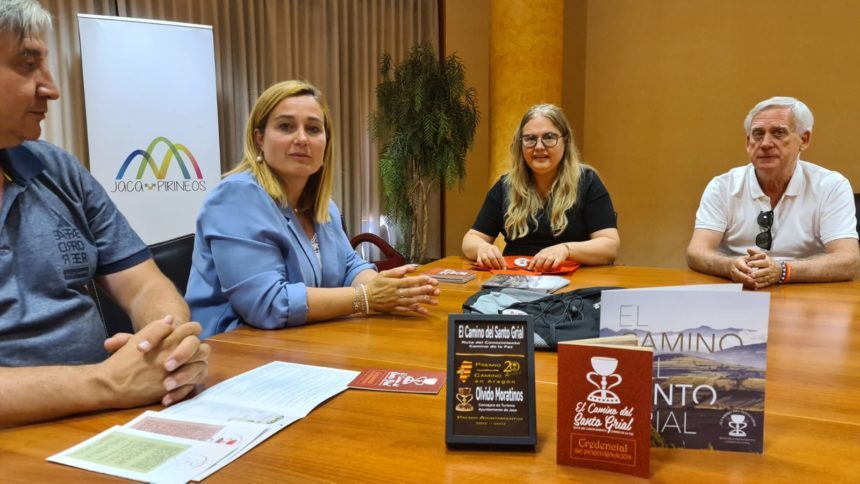 The City Council of Jaca will promote the consolidation of the ‘Camino del Santo Graal’ through various actions, among which is the support to pilgrims and the promotion and dissemination of the route. This was stated by the Councillor for Tourism, Olvido Moratinos, the president of the Cultural Association The Way of the Holy Grail, Ana Mafé, at the meeting held recently at the Palacio de Congresos de Jaca. The meeting was also attended by the director of the Tourist Office, José Ángel Hierro, and other members of the association’s board of directors.

During the meeting, and coinciding with the 20th anniversary of the creation of the Asociación Cultural El Camino del Santo Grial, Moratinos pledged to support, on behalf of the Jaca City Council, the Way of the Holy Grail.

In this sense, she confirmed that an agreement will be signed with the association to materialize this support. The first step will be to open the Hostel of the Camino de Santiago, municipal ownership, to pilgrims on the ‘Camino del Santo Graal’. In addition, they will jointly seek the formula that will enable the signage of the Camino and will work on its projection incorporating it into the municipal tourism portal visitjaca.es

Moratinos and Mafé agreed on highlighting the tourist, social and structuring potential of the Way of the Holy Grail as an element of wealth and development for the territory, where Jaca plays a fundamental role. It should not be forgotten that Jaca is the only city where two paths that wrote history converge: The Way of St. James, a World Heritage Site, and the Way of the Holy Grail, in its journey of more than 11 centuries through Aragonese lands -and, specifically, through La Jacetania, in Jaca, San Adrián de Sasabe de Borau, San Pedro de Siresa, Bailo and San Juan de la Peña, among others-. A historical fact that opens the doors to endless possibilities of development for the territories, within its sphere of influence.

The Way of the Holy Grail

In 2022, the Cultural Association The Way of the Holy Grail is committed to giving a new impetus to the enhancement and development of the route between Aragon and Valencia, in which La Jacetania plays a special role. The non-profit association is aware of the tourist, religious, historical and natural potential that the Way of the Holy Grail, the Route of Knowledge, the Way of Peace, represents for rural areas. For all these reasons, its members have been working, since 2002, on the promotion and projection of the route as a backbone of the territory.

Together with San Juan de la Peña (where the Grail was hidden in its flight from the Saracens for more than three centuries), Jaca, Bailo, Borau, San Adrián de Sasabe, Botaya, Siresa,… are some of the enclaves contemplated by the route in La Jacetania. But they are not the only ones, as the proposal includes different branches that comprehensively cover the development of the territory, incorporating into the project enclaves and localities endorsed by their history, their culture and their uniqueness. In total, nearly 600 kilometres of route.

Currently, hikers and pilgrims who follow the steps of the Holy Grail in La Jacetania do so through the maps made by the cultural association El Camino del Santo Graal by Fernando Avilés for the Holy Grail Route (European project promoted by the University of Zaragoza in 2015). In recent months, the pilgrim’s credential has been presented and work is being done to achieve the signposting of the Camino, the unfinished business in order to continue advancing in its promotion and development.

Since 2021, the City Council of Jaca has been collaborating with the Cultural Association The Way of the Holy Grail through the areas of Culture and Tourism. Precisely, in the first cultural conference ‘The Way of the Holy Grail’ in Ciudad de Jaca, which was held last June with great success and with the support of Turismo de Aragón, Diputación Provincial de Huesca and mayors and other political, social, cultural and business representatives from Aragón and Valencia, recognition was given, among others, to Olvido Moratinos (Councillor for Tourism) and Javier Acín (Councillor for Culture) for their support to the association.