You are here: Home  /  Editorial  /  History  /  Places  /  THE FIRST INTERNATIONAL PILGRIM TO WALK THE 518 KMS OF THE PATH OF THE HOLY GRAIL FROM SAN JUAN ARRIVES IN VALENCIA!
Editorial 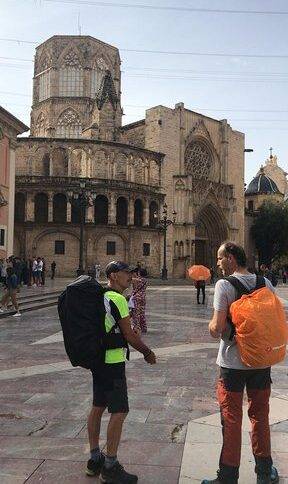 THE FIRST INTERNATIONAL PILGRIM TO WALK THE 518 KMS OF THE PATH OF THE HOLY GRAIL FROM SAN JUAN ARRIVES IN VALENCIA! 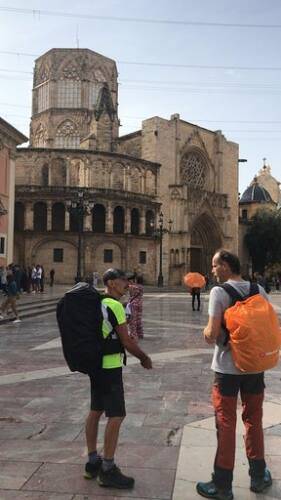 ##At eleven o’clock this Saturday, September 14th (2019) the Italian Antonio Aiardi, the first international pilgrim to travel the entire 518-kilometre route of the ‘Holy Grail Path’ from the Royal Pantheon Monastery of San Juan  in Aragon… arrived at the Cathedral of Valencia.

At the door of the cathedral was Don Juan Miguel Díaz Rodela, Keeper & Custodian of the Holy Chalice who was accompanied by numerous personalities. Among them was Mr. Antonio Rossi, president of the Brotherhood of the Holy Chalice, Mr. Bartolomé Nofuentes, provincial deputy and Mr. Antonio Salvador Corell, mayor of Barracas, the first municipality of the ‘Holy Grail Path’ in the province of Castellón. The Autonomous Secretary of Tourism of the Valencian Community, Don Francesc Colomer, has also been represented as he had been invited to the event personally through the Cultural Association ‘El Camino del Santo Grail’.

One of the most emotional moments was when the pilgrim of Italian origin Antonio Aiardi saw the reception that had been prepared by the Cultural Association, ‘The Way of the Holy Grail’ at the Puerta de los Hierros. While all the congregants applauded his feat, a duo of “tabal i dolçaina” directed by Mr. Leto, vice-president of the Brotherhood of the Holy Chalice, played music whilst photos were taken.

The pilgrim’s first hug was for ‘Dr. Ana Mafé García, the vice-president of the Cultural AssociationWay of the Holy Grail.’  Antonio then addressed Mr. Jesús Gimeno Peris, Secretary of the association and responsible for the camino in the town hall of Massamagrell.

Antonio Aiardi is the first international pilgrim to have walked the Holy Grail Road. To attest to this important fact, there was Don Simeón Ribelles Durá, Notary of Valencia who has issued a public act of the welcome act. All attendees have been noted and photographs taken, including attendees were Dr. María Gómez, Sergio Solsona (writer and representative of the Order of the Temple of London), Raúl Membrives (Abalone Events & Catering), Juan Carlos Bermejo (Valencia Venues).

For work reasons,  Marco had to leave the camino in Teruel. However, he  monitored Antonio’s journey until he reached the cathedral of Valencia. The last stage from Massamagrell to Valencia was travelled by Antonio accompanied by his friend, Eduardo.

They started the route on foot on Wednesday, August 28th. They reached Jaca from Zaragoza. Marco came from Valencia and Antonio arrived from Italy.

Once in Jaca, Eduardo took them to the Monastery of San Juan de la Peña… where they began their walking adventure that ended successfully in Valencia this weekend!

Congratulations to Antonio from the 24/7 Valencia team