You are here: Home  /  History  /  “The Holy Chalice arrived in Valencia from Zaragoza in the first quarter of the 15th century”
History 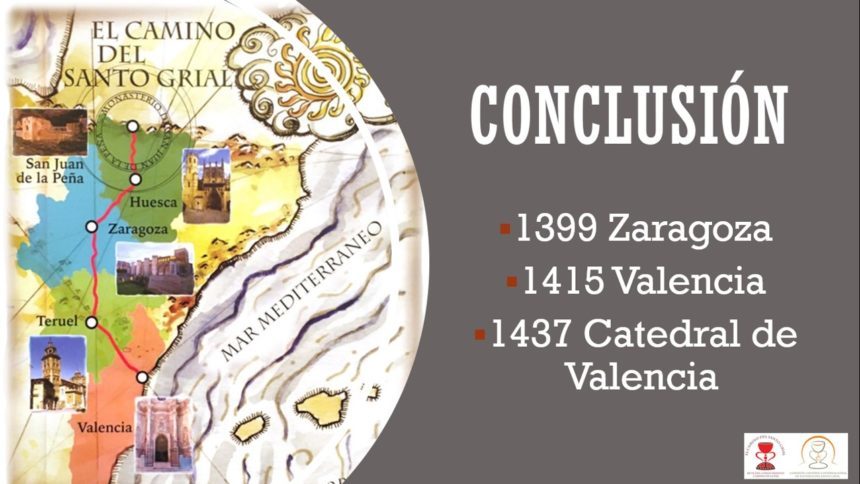 The Holy Chalice arrived in Valencia from Zaragoza in the first quarter of the 15th century.

The historical route coincides with the Way of the Holy Grail that includes Huesca, Zaragoza and Teruel.

This week, in the seminar organized by Aula Grial on “The Valencia that received the Holy Chalice”, Dr. Ana Mafé García gave a lecture on the historical evolution of the Holy Chalice of the Cathedral of Valencia in the Hispanic territory.

With the title “Margarita de Prades, a conflictive testament”, she explained the places where this sacred relic passed through, based exclusively on documentation from historical archives and Catalan studies.

At the beginning of her master class, she presented a methodology of study typical of the Humanities.

Firstly, she commented on the need to establish “the state of the question” and identify what has been said about the Hispanic route of the Holy Chalice.

To this end, she cited the most important study carried out to date, which focuses on the archival documentation of the Holy Chalice. We are referring to the doctoral thesis Las reliquias de la Capilla Real en la Corona de Aragón y el Santo Cáliz de la Catedral de Valencia (1396-1458) that Dr. Catalina Martín Lloris presented in November 2010 at the University of Valencia.

After the study of the documentation, Dr. Mafé has elaborated, based on the critique and analysis of the documentation studied (among them the book of Dr. Antonio Beltrán of 1960), the historical path of the relic. She has used archival documentation to describe each and every one of the chronological spaces that contemplate its history from the year 1399 to March 18, 1437.

In order to establish with academic solvency where the Holy Chalice was located in each of these historical moments, the places where the kings of Aragon were crowned have been studied and exposed, and this historical moment has been related to the existing documentation in the Archive of the Crown of Aragon, in the Archive of the Cathedral of Valencia and even in the work ‘La real capilla de Santa Agueda, del palacio de los reyes de Aragón, en Barcelona: notas histórico-críticas de Buenaventura Bassegoda y Amigó’, published in Barcelona in 1895.

Then Dr. Mafé began to list one by one the more than thirty documents that she presented based on the chronology of the kings of the Crown of Aragon who claimed the Holy Chalice, starting with King Martin I of Aragon, (1356 -1410) who swore the oath in Zaragoza before the Cortes on October 13, 1397 and was crowned on April 23, 1399 in Zaragoza.

After his coronation, he requested the Holy Chalice three times in 1399 from the abbot of the Royal Pantheon Monastery of San Juan de la Peña. This information was discovered by Dr. Martí Loris and corresponds with the affirmation of the document of delivery (Parchment 136 of the Archive of the Crown of Aragon, dated September 26, 1399).

“the most excellent prince and lord Don Martin, (…) has wished and tried hard to have in his royal chapel that stone Chalice in which our Lord Jesus Christ, in his holy supper, consecrated his precious blood, (…) to the Lord King, being in the minor chapel of the Palace of the Aljafería of the city of Zaragoza”.

This document makes it clear that in September 1399 the Holy Chalice, which until then was in the Royal Pantheon Monastery of San Juan de la Peña, was delivered to King Martin I, in the city of Zaragoza and deposited in his royal chapel.

The relics in the Middle Ages, despite being movable objects, once deposited on “sacred ground” are not elements that can be moved easily. They need to be guarded by a person responsible for them (linked to the clergy) and they can only be moved with the proper permission, in writing and for very specific reasons.

That kings can hold itinerant courts in any part of their kingdom and even beyond their borders, does not mean that they travel with their reliquary on their backs. That is unthinkable, not only for security reasons, but also because their transport requires expensive wooden chests as well as animals.

Relics, and in this case, the Holy Chalice, are not a trousseau or a “personal jewel that can be worn as one’s own”. They are not a transportable and easy to display object like a necklace, a diadem or any other object of power used by royalty (staff, sword, shield, helmet, etc.).

In this context of study, Dr. Mafé has exposed the documents in which the relics donated by King Martin the Humane to the royal chapel of Barcelona appear. And, among all of them, there is not a single record in the whole Archive of the Crown of Aragon that mentions the presence of the Holy Chalice in the city of Barcelona.

On the other hand, in 1408, “the blood of Christ, the Lignum sanctas Crucis, the three thorns of the crown, the sponge, the shirt, the part of the tunic of the wedding of Canaa, the Veronica, the arm of Saint George and Saint Louis, the body of the Blessed Marina, Saint Martin”, among others, are listed as donated.

These lists have been compared with the work of Buenaventura Bassegoda y Amigó, published in Barcelona in 1895 and it has been verified in the author’s own text that the queen dowager Margarita de Prades disposed of all the reliquary of her husband giving pieces to churches and convents.

There is a blunder in Dr. Beltrán’s work. An error of interpretation that lacks a minimum of documentary research, perhaps because during his study he was in “other matters” of the Holy Chalice.

Dr. Beltran mistakenly states that the piece is in Barcelona. Wrong! Dr. Beltrán does not know that the inventory is made in Barcelona because the Celestines, the order that was in charge of the custody of the relics in the city of Barcelona, filed a lawsuit against the widowed queen Margarita de Prades to “recover” the bulk of the royal reliquary of Martin the Humane. And to do so, they need to create this inventory. As in 1960 Dr. Beltran does not make any study on the will of Martin the Humane, nor on the different inventories that, throughout history, the royal chapel of Barcelona receives, he takes for “certain” that the Holy Chalice was in this chapel. An error that has been perpetuated by all those who have limited themselves to copy the words of this brilliant archaeologist who took the study of an “inventory document” as a true “act of delivery”. A serious error.

Therefore, if something has been made clear by the paleographic and documentary study of the travelling history of the Holy Chalice, it is that the sacred relic was taken from Zaragoza to Valencia in 1415, probably for the wedding of the Aragonese royalty in the Cathedral of Valencia.

For those who have doubts, they can study the “social instability” that prevailed in the counties, which made it unsafe to leave any kind of treasure that could be looted in the Cathedral of Barcelona.

Finally, Alfonso the Magnanimous reached an agreement with Margarita de Prades to recover the royal reliquary. Previously, King Ferdinand of Antequera had already defended her against the pretensions of the Celestines.

Alfonso moved the court to Valencia and ordered to bring the rest of his treasures to the extinct royal palace of Valencia, where his wife and lieutenant Maria de Castilla had been living for years.

In conclusion, the Holy Chalice of the Cathedral of Valencia does not appear in any archival document, in any royal donation or in any of the inventories made on the relics deposited in the royal chapel of Barcelona. Therefore, there is no document to support this statement, being an unfounded speculation.