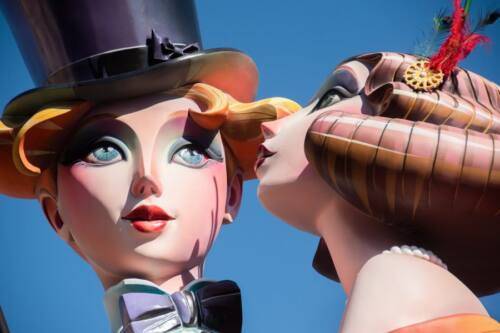 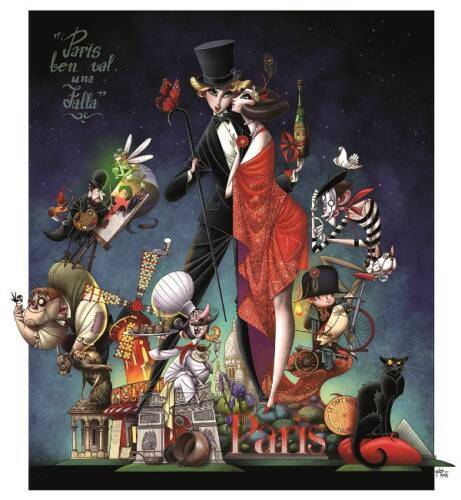 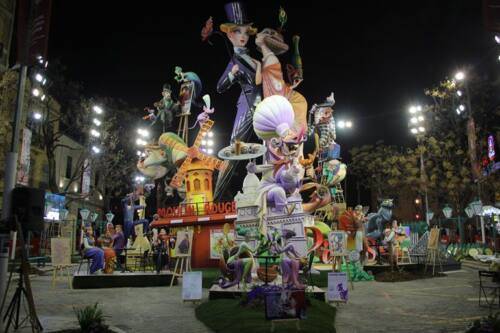 
According to the records, the first Falla to be erected in the Plaza Na Jordana was way back in 1884 and since 1954 it has been part of the Special Section (the Premier league of Fallas), longer than any other Falla. By 1983, the Fallas constructions were getting too big for the little plaza so it was decided in the interest of safety that they would be moved up the street to the Plaza Portal Nou where they have been set up and burnt down each March ever since. Na Jordana has won more Premios de Ingenio y Gracia (sort of an artistic merit prize given for creativity and originality) than any other Falla and has won the citywide first prize 12 times.

Of all the Fallas in the Special Section, Na Jordana has always been known as being slightly left-field and has constantly tried to give us something a little bit different. Their commitment to cultural events such as theatre and art exhibitions throughout the year makes them stand out from other important Fallas and when it comes to the design of the Falla itself, Na Jordana has always tried to push things forward. We went down to meet the president of Na Jordana Falla at the Casal (the Falla club house) in what for most of the year is a quiet street in a working-class residential area of the Barrio del Carmen.

A lifelong resident of the neighbourhood, PERE BORREGO lives just across the street from the Casal. He popped down to meet us from his first floor flat with a bunch of keys and one of those plastic cigarette substitute things “a bad time to give up smoking”. He has been a Fallero “since birth” and at four years old he was involved in the Falla´s theatre group. His father was president of Na Jordana Falla for nearly 30 years and he himself became president in 2001.

What makes Na Jordana different from the other Fallas in the Special Section?

Naturally every Falla has its own idiosyncrasies. In our case, the key is to mix a kind of cocktail of enthusiasm, excitement and hard work. We work systematically throughout the whole year planning and working up to the night of the burning and we work hard on the cultural activities, which keep the Falla active throughout the year.

Apart from the Falla itself what contribution does Na Jordana make to culture in the city?

One of the first things we try to do is foster a taste for theatre amongst the youngest members of the Falla and the children in the local area. Our theatre group has won 39 awards over the years. Since 1977 we have broken with the traditional presentation ceremony of the Fallera Mayor and put on a show in which everyone in the Falla takes part. Every October since 2000, we have organized a public reading of “Tirant lo Blanc”, the classic flagship book of Valencian literature. Different parts are read out by falleros, local people and different personalities from the worlds of politics, sport and culture. We also have, for example, the Christmas decorations and the nativity scene which incorporates buildings and monuments from Valencian history.

Is the Falla truly part of the neighbourhood? How many Falleros actually live in this area?

I live here and I am more than happy with our group. There are 110 adult falleros and around 40 children. Of all of those, 70% live in the Barrio del Carmen. There are those who live in other parts of Valencia but used to live here as children and whose parents still live here. You also get children bringing along their friends who may live in other parts of the city. A few years ago we bought this Casal which now belongs to our Fallas commission and will be here for future generations of Falleros.

Does Na Jordana bring anything new to the world of Fallas?

We are at the forefront of Fallas design, our “Pinocchio” monument in 1991, designed by the recently deceased Manolo Martin, was a real breakthrough in the way Fallas look and we try to keep that tradition going. We have won more Ingenio y Gracia awards than any other Falla. Personally I don´t like Fallas that don´t say anything. The whole point is that each year you´ve got to burn all the vice, the mistakes, the ills of society. Put them into your Falla and burn them in the purifying flames.

Do you always use the same artists?

Well, the Special Section is a bit like the Champions League you have to keep changing. We´ve used many great artists in the design of our monuments: Sigfrido Martin, Chema Coso…..Our search for something different hasn´t always gone down well and we´ve missed out on some first prizes because of this. Only El Pilar and Convento Jerusalem have won more than us and of course we´re the Falla that has been in the Special Section the longest.

Do you feel you are well supported by the Local Authorities?

The City Council gives us grants which make up about 21% of the cost of the monument and there is prize money for the winner, about 18,000 Euros, I think. But then, the Fallas contribute a lot to this city.

So how do you get your money? What are your main sources of finance?

Well, we have the subscriptions that all Falleros pay. In the 50’s we were one of the first Fallas to use lottery sales as a source of income. It was a lot of work with 10 to 12,000 people all over Spain buying lottery from us several times a year. Now with the internet and the possibility of buying lottery whenever you want it’s not such a good source of income. We receive contributions from the neighbours, from sponsors and other people and groups who work with us and we have a magazine, which brings in advertising money. This year there was a meeting of the Special Section Fallas and we talked about fixing a limit so nobody could spend more than 190,000 Euro on a single Falla, but in the end we couldn´t come to an agreement. Some “Comisiones” will be spending 240,000 Euros on their Fallas, nearly 60,000 more than us.

Especially during a recession people are going to question how you can justify all this expense on a big party and something that is going to be burned after a few days.

Anyone who says that knows little of the social impact of Fallas on the city of Valencia. The festival is good business for the city. It generates and circulates a lot of money. Apart from the design and construction of the fallas themselves, Na Jordana directly provides work for pyrotechnicians, musicians, the florists who provide the flowers for the “Ofrenda”, the people who print our pamphlets and magazines and those who make the dresses and traditional clothing for the falleros and falleras. The hotels and local bars and restaurants, of course, do a roaring trade but when you ask them for 20 Euros for an ad in the magazine they don’t want to know.

What would you recommend to anyone coming to see the Falla at Na Jordana?

Don´t miss the Cremá, the burning. This year the theme will certainly work well with the flames! There´s a lot of wood in the structure to make it burn slowly so it should be pretty spectacular.

On a personal note, what’s your favourite part of Fallas?

What I like most is the work through the year rather than the Fallas week itself. My favorite bit is the build up through the first weeks of March to the Plantá (when the Falla is put in place) and the Cremá of course.

I´ll tell you something, though. On the night of the Cremá at five in the morning I like to sit on my balcony when it’s all over and quietly look down on the street, which is peaceful and empty again. Then before you know it it’s back to work preparing for next year.