You are here: Home  /  Places  /  THE PORT OF VALENCIA
Places 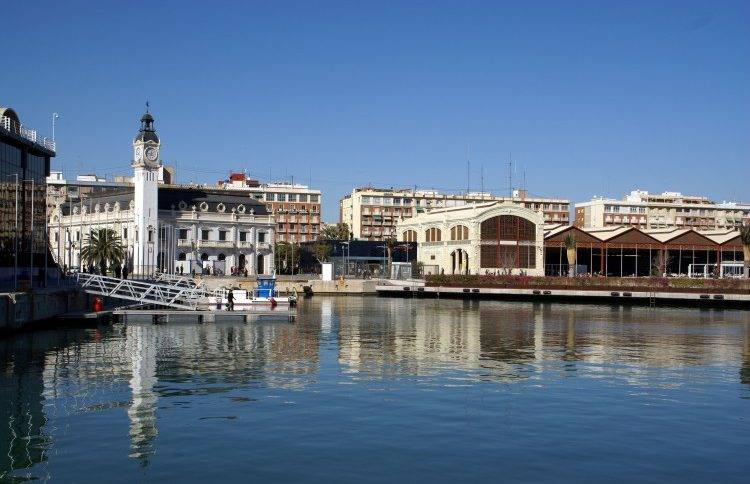 THE PORT OF VALENCIA

Shelter from the storm

Valencia has little maritime culture. It is not sailing ships and anchors but the symbols of agriculture and industry which are portrayed in the motifs of its grand 19th century town houses around C/Colón and the Gran Vía. Rather than a port city, Valencia feels more like a city which just happens to have a port. A port whose sheer size and economic importance would come as a surprise to many Valencia natives.

New transport links to the seafront, the resurrection of Malvarrosa beach and showcase ‘events’ like the America’s Cup and the Grand Prix have brought the city a little closer to the sea but the importance of its commercial docks is still largely overlooked. This might be about to change. With the construction industry falling flat on its face and bad times ahead predicted for tourism, the city’s port is emerging as the ‘economic oasis’ which may just see Valencia through the recession.

According to the official 2008 figures of the industry publication ‘Containerisation International’, the commercial port of Valencia is the biggest container port in the Mediterranean. It is the fifth biggest in Europe and one of the top thirty largest in the world. Most figures indicate that Valencia’s port outstrips Barcelona as Spain’s principal commercial port. A fact which, in a city obsessed with its rivalry with its Catalonian neighbours to the north, you might have thought would be cause for waving senyeras and dancing to the tones of the dolçaina and tabalet.

The port directly employs over 15,000 people and generates more than one billion euros a year in revenue. An average of 2,000 lorries go in and out of its gates every day and it covers a huge area of 4,366,262 square metres. There is also a passenger port with regular crossings to the Balearic Islands and Italy and a marina with space for 800 yachts (and that’s not to mention the huge amounts of heroin and cocaine that the police suspect pass through the port every year).

Of course the 2008 figures will be hit hard this year by the recession but Rafael Aznar, president of the Valencia Port Authority, remains optimistic: ‘‘This year will be more difficult than last year but we are, in relation to our competitors, in a considerably better position’’, he said. ‘‘We are losing a little where others are losing a lot and we are increasing in areas like containers where others are decreasing.’’.

So if this is the case why does Valencia ‘live with its back to the sea’? The answer may lie in the fact that the port was only established as a commercial concern just over 150 years ago and buildings like the Clock Tower and the docks in the Port Vell (Old Port) weren’t completed until 1918. For centuries the city’s eyes looked to the ‘huerta’, not the coast. The Valencia merchant classes had made their money initially from oranges and rice and later from investment in industry. The port was a product of, rather than a motor for, the agriculture and industry-based economy. There were also physical barriers. The port and its adjacent neighbourhoods were separated from the city either by fields or train tracks for a long time and have always been fiercely independent from the rest of Valencia.

In the present day the port is run directly by the national government through the state Ministry of Public Works and not by the city of Valencia. This has sometimes been a source of division and the Port Authority has not always seen eye to eye with local politicians especially if they are from opposition parties. The recent push by the city government to promote the beach area with the America’s Cup and the Formula One developments hasn’t always gone hand in hand with the interests of the port. Building work on the docks had to be stopped during the America’s Cup as the passing lorries and the noise was deemed to be detrimental to the atmosphere of the event. Similar problems have arisen with the new Grand Prix circuit and although these events bring money into the city they are largely superficial in comparison to the day to day ‘bread-and-butter’ business of the port.

The port workers themselves may have not exactly helped to unite the port with the rest of Valencia life. As tradition demands, Valencia dock workers are a cohesive and insular lot but in recent years, their jobs have changed dramatically. The operation of high-tech cranes and other equipment is said to be as complicated as flying a commercial jet. A rotation system means that they have to be just as handy at driving forklifts and doing heavy lifting as they are at operating complex machinery but dock workers these days are less like the burly, inarticulate Marlon Brando types of ‘On the Waterfront’ and more like highly qualified engineers. Their salaries can be as high as 60,000 to 80,000 euros a year but at work they still keep the traditional dock worker’s solid working class values and are staunch union men. Jobs and union membership are passed from father to son, making it very difficult for outsiders to enter and many port workers still live in the close-knit barrios around the port. All this adds up to their union ‘Coordinadora’ being one of the most powerful unions in Spain. Not even Franco was able to fully control them.

The old traditions, however, may not be under threat. At the end of last month a two-day action was called up against a new law which seeks to open up and deregulate the way dock workers are organised and employed. The unions brought the port to  a virtual standstill. Union spokesperson Rafael Besés says: ‘‘Our job is highly specialised. We work with complicated technology and hundreds of tonnes of containers are continuously being moved about all around you every day. If one day you are working the crane 30 metres up in the air, the next day you are down below handling the load. You need to be sure for safety’s sake that your workmates know as well as you do what they are doing and what is in their hands’’. In the middle of a recession, the Port Authority’s attitude has been, more or less, ‘If it ain’t broke, don’t fix it’ and the dock workers, for the time being at least, seem to have got their own way marking their territory just as they’ve always done.

If Valencia really does live with its back to its port, from the point of view of a true Valencia success story and its workers, it might just be best to keep things that way.