You are here: Home  /  Editorial  /  The Provincial Council of Huesca says YES to ‘The Way of the Holy Grail’ by the unanimity of all parties
Editorial 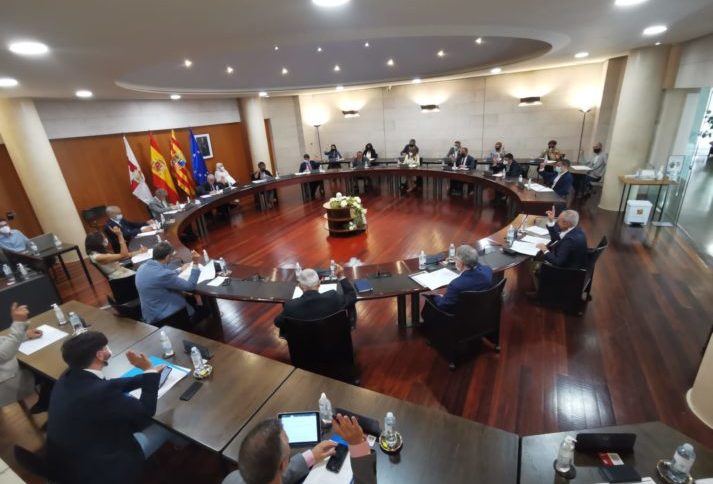 ##Ciudadanos gets the DPH to request the Government of Aragon a series of fundamental actions for the consolidation of the path.

The provincial group of Cs has added support to claim the consolidation of a tourist, cultural, religious and sports route, the Way of the Holy Grail, with the involvement of provincial institutions and municipalities, with which to exploit the potential of the route to define a certain future from the implementation of the road, social and economic development of the towns through which it passes its route.

The plenary of the Provincial Council of Huesca has supported, during the session held this past Thursday, the proposals submitted by the group of Cuidadanos (Cs) to request the promotion of a tourist, cultural, religious and sports route with all those involved in the ‘Camino del Santo Grial.’

The provincial group has had the support to claim the involvement of the Government of Aragon and Spain in the enhancement of the path of the Holy Grail that runs through Aragon. “With this proposal we want to facilitate the creation of a tourist, cultural, religious and sports route that serves for the social and economic development of the populations through which it passes, with the necessary involvement.”… stressed the spokesman of Cs – of the various administrations, as well as the entities and associations involved.

Taking advantage of this route, Royo highlighted: “…Will allow to position at a tourist level, even more, the province of Huesca, since this route not only has a historical value, but is sustainable and respectful of the environment, in addition to its accessibility”. A route that has recalled that runs through several towns and emblematic places of the province, such as the hermitage of Loreto or the church of San Pedro in Huesca, Yebra de Basa, the monastery of San Pedro in Siresa, the Cathedral of Jaca or the Monastery of San Juan de la Peña.

In the Official Bulletin of the Province of Huesca No. 133 of July 14, 2021 this agreement of all the political forces of the Provincial Council of Teruel appears. It shows once again that this issue, the Way of the Holy Grail, unites wills with the same purpose: to give an opportunity for future development and growth for an historic route.

With the text “Declaring the urgency unanimously; it is also approved, unanimously and with the character of institutional, the resolution regarding the enhancement of the “Way of the Holy Grail” as it passes through Teruel and Aragon.”

In his explanatory statement, Mr. Cristian Royo Blecua, spokesman for the Mixed Group – Citizens, explained that “the Cultural Association ‘The Way of the Holy Grail’ is a non-profit association established in 2002 in order to promote, disseminate and consolidate the physical path that runs between the Royal Monastery of San Juan de la Peña and the cathedral of Valencia, crossing Aragon from north to south in its entirety”.

He goes on to comment on the history of the founding of this road and identifies its protagonists. All this with the aim of leaving evidence that it is the civil associative fabric who supports this work from its beginnings.

The purpose of the proposal is to enhance the value of the physical path, through the creation of a tourist, cultural, recreational, religious and sports route that will serve for the social and economic development of the towns through which it passes.

Mr. Royo explained that if “to the historical value of the route, how sustainable and respectful it is with the environment, we add its accessibility, we find ourselves with a tourist product that can be a very important economic boost for the more than 70 towns in the three Aragonese provinces and up to 25 towns in Castellón and Valencia”.

He also explained how the ‘Asociación Cultural El Camino del Santo Grial’ served the University of Zaragoza to present its project ‘Grail: Holy Grail: mystic routes and activities to improve local tourism’, selected for funding by the European Commission. “This gives us an idea of the interest and potential that the Holy Grail Route has outside our borders as a tourist product,” explains Royo.

He also stresses that “from our provincial group of Ciudadanos we consider that The Way of the Holy Grail can become a new tourist story that positions, even more, the province of Huesca”.

But, Royo explains that “we also consider that it should be framed in the global project of The Way of the Holy Grail, and that, due to its cultural, economic and social relevance, it should go hand in hand with the rest of the institutions of the community, as well as with the entities and associations involved”.

For all these reasons, the Mixed Group – Citizens has proposed to the plenary session of the Provincial Council of Huesca the adoption of the following:

The Plenary of the Provincial Council of Huesca urges the Government of Aragon to completely signpost the Way of the Holy Grail, from the Monastery of San Juan de la Peña to the limits with the Valencian Community, in collaboration with the town councils of the towns involved.

The Plenary of the Provincial Council of Huesca urges the Government of Aragon to work effectively with the entities and associations involved, in order to lead the definition, dynamization, cultural dissemination and tourist and cultural promotion of the Way of the Holy Grail.

The Plenary of the Provincial Council of Huesca urges the Government of Spain to consider the programme “Holy Jubilee Year 2025-2026”, as an event of exceptional public interest, for the purposes of the provisions of Article 27 of Law 49/2002, of December 23, on the tax regime of non-profit organizations and tax incentives for patronage.

The unanimity of all parties has been evident in the Provincial Council of Huesca, something to be grateful for in an issue that will feed many Aragonese and Valencian families, as is currently happening with the municipalities that mark the route of the Way of St. James.