You are here: Home  /  Film  /  THE REGION OF VALENCIA PRESENTS ITS POTENTIAL AS A FILM SET AT IBERSERIES PLATINO
Film 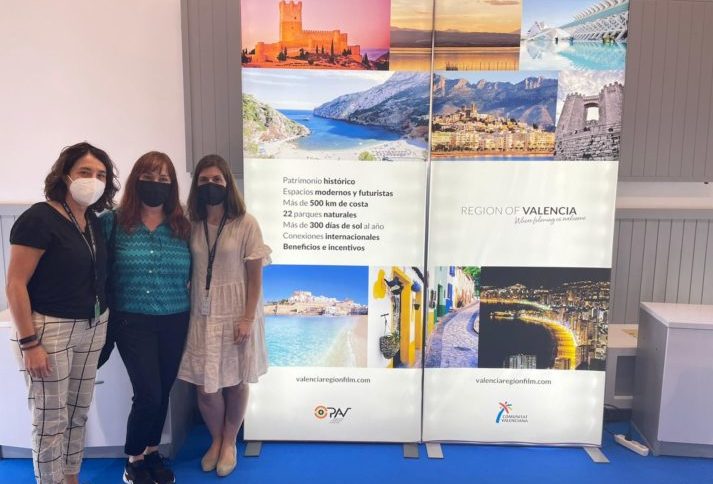 The Region of Valencia presented its range of locations, facilities and benefits for filming to attending producers, buyers and content platforms.

In addition, Valencia Region Film had a prominent presence at the event, participating in conferences on synergies between tourism and the audiovisual sector alongside representatives of other entities and film commissions and in a pitch for producers.

The Region of Valencia continues to increase its number of film shoots, both national and international.

Valencia Region Film has promoted the joint offer of locations for filming in the Region of Valencia at the Iberseries Platino Industria event, the largest audiovisual event in Spanish and Portuguese, held at the Matadero Madrid cultural centre from 28 September to 1 October. In this first edition, the event brought together a large number of audiovisual professionals, including the sector’s most important creators, executives, platforms, television channels and agents.

Representatives from some of the main film offices/commissions in the region attended the event, such as the València Film Office, Benidorm Film Office and Film València. The Costa Blanca Film Commission, Peñíscola Film Office and the Diputació de Castelló were virtually accredited at the Valencia Region Film stand.

During the event, several meetings were held and commercial contacts were made with producers interested in learning about the offer of the Region of Valencia, motivated by its diversity of landscapes and services. The region was also promoted at the conferences on synergies between tourism and audiovisuals held as part of the event, with the participation of Turisme Comunitat Valenciana and representatives of organisations and film commissions from countries such as Panama, Mexico, Colombia and the Dominican Republic.

The Valencia Region was chosen along with 10 other locations from around the world to present its facilities and benefits for filming audiovisual productions to producers, buyers and content platforms in the IPI PITCH area. Attendees were informed of the main values of the Region as a film set: the diversity of locations, the large accommodation capacity, the hours of daylight per year, the growing audiovisual and services industry, and the work carried out by the various Valencian film offices throughout the territory.

The presence of the Valencian Community at Iberseries has served to boost the region’s visibility as a film set and to generate contacts and synergies among the attendees. In this regard, it should be noted that the region continues to increase its number of film shoots, as a result of the great interest in the audiovisual sector, both nationally and internationally.

In addition to recent Spanish productions such as “El juego de las llaves”, by Vicente Villanueva; “Nosotros no nos mataremos con pistolas”, by María Ripoll; and “Llenos de gracia”, by Roberto Bueso; it is worth highlighting the international shootings of films such as “Uncharted”, starring Tom Holland and based on the famous video game saga, or the Amazon Prime spy miniseries, “Citadel”, which is currently being filmed in the city of Valencia.