You are here: Home  /  History  /  THE SEARCH CONTINUES: A ROUTE TO THE HOLY GRAIL
History

The ‘Holy Grail’ has been in the Cathedral of Valencia’s reliquary since 1437, hidden away from the public eye and not exhibited until 1916. According to tradition, the Holy Grail is the cup from which Jesus Christ drank from during the Last Supper making it the most important and venerated relic in Christian faith. The whereabouts of the Holy Grail is known to spark controversy as a plethora of stories have been crafted around it throughout time and each is as shrouded in mystery as the next. However, the Holy Grail of Valencia, known as ‘Santo Grial’, is the only Holy Grail in the world that is recognised as authentic by the Vatican and takes pride of place in Valencia’s Cathedral. Revered by Christians worldwide, it is apt that such a relic is in the heart of the city’s gothic quarter given Valencia’s rich cultural and religious history.

‘El Camino del Santo Grial’ is a cultural association in Valencia dedicated to establishing a route for pilgrims in pursuit of the Holy Grail, something comparable to the legendary ‘El Camino de Santiago’ in the North of Spain. The organisation was founded in 2002 and since then there have been expeditions on bicycle, horseback, and foot. The route reaches almost 640km from the Pyrenees through Somport, passing Jaca and continuing through the Royal Pantheon Monastery of San Juan de la Peña (Huesca) until it reaches the Cathedral of Valencia. Since the Holy Grail association of Valencia was founded, it has distributed more than 45,000 brochures and 17,500 Pilgrimage Credentials in a territory that covers more than 600km. In recent years, pilgrims from all different provinces in Spain have been received at the Cathedral of Valencia by the guardian of the Holy Grail, Álvaro Almenar. The route has a population of more than 1,740,000 inhabitants and encompasses many different administrative buildings such as town halls, provincial councils and tourist centres, for instance Valten Travel who offer a package to do the route on either foot or horseback.

The association has participated in many global tourism fairs, including ARATUR, FITUR, ‘Mostra de Turisme’. Last year ‘la Asociación Cultural El Camino del Santo Grial’  attended FITUR-the international tourism fair- and sought to consolidate the investment of four million euros for two municipalities on the ‘Camino del Santo Grial’ in Aragón. This year the purpose of their attendance was to present the balance in figures of the ‘Camino del Santo Grial’ in front of the Valencian community, ‘Ruta del Grial’ with the goal of joint action being taken to signpost the route to prevent pilgrims getting lost at its most complicated points. On Friday 20th January 2023, a presentation was given at this global meeting point for tourism professionals by the president of ‘Camino del Santo Grial’, Dr. Ana Mafé García and the secretary Mr. Jesús Gimeno Peris. The presentation was supported by Cristina Monzón Martín and Alejandro Martínez-Notte, members of the audio-visual production tourism company, Teleaire.com. They presented the conclusions of the field audit they conducted of the route of ‘El Camino del Santo Grial’ from Somport to the vicinity of the Royal Pantheon Monastery of San Juan de la Peña in Aragon. They were also accompanied by Indiana Tours, ‘los Templarios de Monzón’ and a group of influencers and YouTubers.

Finally, there is ‘La Asosciación Internacional Itinerario Cultural Europeo Camino del Santo Grial de Europa’ who are responsible for promoting the route as a true “European Cultural Itinerary”. As the route travels through Europe along the ancient Roman roads, this association highlights the universality of the ‘Search for the Holy Grail’ as an important European legend. According to Dr. Ana Mafé García, an expert in the protohistory of the Holy Grail and vice-president of the association, the route is often fondly referred to as “knowledge route” and “the path of peace” emphasising the essential meanings and the universality of this across different historical and cultural boundaries.

Since 2002, the organisation has firmly established its presence in national press with 360 stories in newspapers, 4900 headlines in digital press and 280 television and radio interviews. However, the real milestone of success for the organisation is the diffusion in the international press. Programmes about the Holy Grail in Valencia and its route has been transmitted by over a dozen channels in Germany, Italy, France, and the United Kingdom with staggering reports of more than 255,000,000 viewers.

It is a privilege for Spain to have one of the most valued religious relics and to be the subject of this historical, universal and legendary quest. Due to the Holy Grail, Valencia has been a Jubilee city since 2015 and after Jerusalem and Rome is the most important in terms of Christian reach…potentially attracting almost 3,000 million people worldwide. The commendable work of the organisation ‘El Camino del Santo Grial’ ensures more people visit the historical and cultural site of the Holy Grail, allowing the mystery to endure and the search to continue… 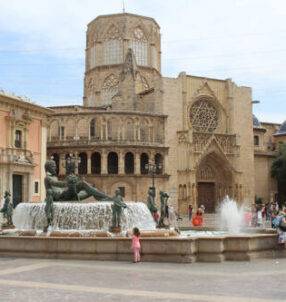