You are here: Home  /  History  /  THE WAY OF THE HOLY GRAIL VIA THE MEDITERRANEA SEA!
History 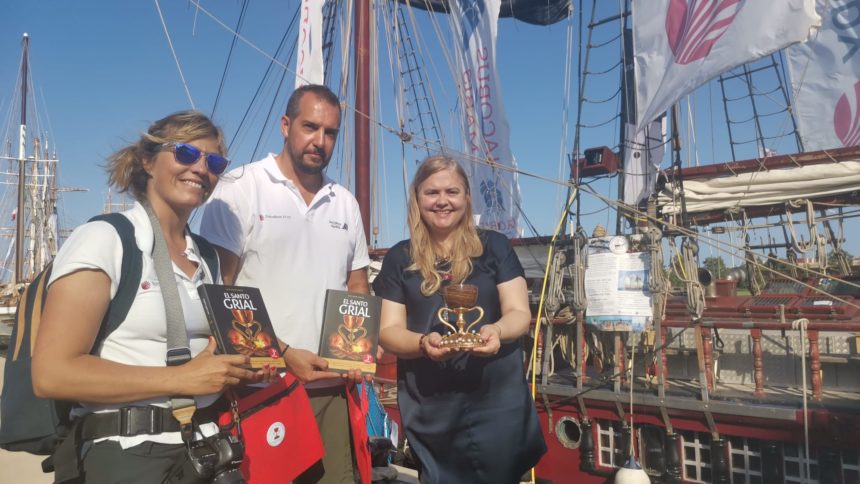 THE WAY OF THE HOLY GRAIL VIA THE MEDITERRANEA SEA!

The Way of the Holy Grail can also be done via the Mediterranean Sea with the ‘Iacobus Maris’ Route!

Thanks to the efforts made by Carles Recio, Dr. Ana Mafé has been invited by the Traslatio Foundation to present the work of the Cultural Association The Way of the Holy Grail and to establish collaborative synergies in the future.

This Friday, July 1st, a very interesting meeting took place in the Marina of Valencia between the president of the Cultural Association The Way of the Holy Grail, Dr. Ana Mafé and Celso González, director of the Traslatio Foundation.

It is perfectly possible to establish a link between the Xacobean maritime route and the Way of the Holy Grail in the Mediterranean.

According to the website of the Traslatio Foundation, the Iacobus Maris Route commemorates the journey of the body of the Apostle St. James from the port of Jaffa (an ancient province of the Roman Empire located in Palestine) to Santiago de Compostela, crossing the Mare Nostrum from East to West and heading north to Galicia. This route is currently the longest Xacobean maritime pilgrimage in history.

In this context, collaborative synergies could be established between the Traslatio Foundation and the Way of the Holy Grail to position Valencia as the city of the Holy Grail, where the most important relic of Christianity is located. It also unites in its physical structure three elements of the three religions that share the same God.

The upper cup, thanks to the research of Dr. Ana Mafé, we know for certain that it is a real Kos Kidush, a Hebrew cup of blessing.

The central part of the golden reliquary is of Carolingian workmanship with a niello technique. This is a Christian goldsmith’s technique.

The base of the Holy Chalice is a censer of Fatimid or Caliphate manufacture, which most certainly comes from Muslim Cordoba in the 8th or 9th century.

To this, we must add an inscription on the base of the piece which, according to the studies carried out by Dr. Mafé, corresponds to an epigraphy written in Hebrew, which can also be read in Arabic written in aljamía and which in its triple reading alludes in a Romance language to the legitimate owner of this cup of blessing: Jesus.

It is for all these reasons that the members of the Foundation have been pleasantly surprised by all this information which, if no one prevents it, could bring much joy to the future maritime development of the Way of the Holy Grail.