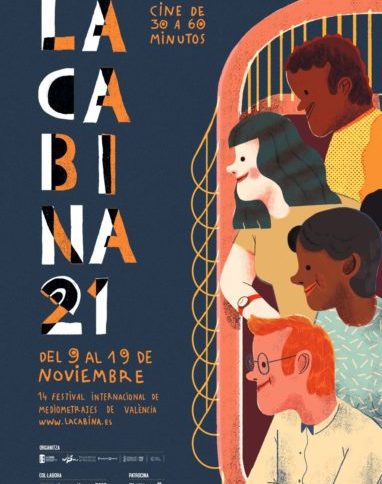 #The artist Jaume Mora presented this week, in the courtyard of the Colegio Territorial de Arquitectos de València, the poster he has created for the 14th edition of La Cabina – International Medium-length Film Festival of Valencia. Together with the festival’s director, Sara Mansanet, he unveiled the official image to the audience at an event that closed with the screening of the medium-length film that won the Best Screenplay and Best Main Performance Award at La Cabina 2020, “Masel tov Cocktail” (Arkadij Khaet, Mickey Paatzsch).

Valencian illustrator and designer Jaume Mora commented on the process of creating the poster for the 14th edition of La Cabina: “the poster is based on a process of sketching, trying to see colour and composition references. I looked at other years’ posters to try not to do something that had already been done. Three sketches came out of which one was chosen, which mutated quite a lot until it finally became what the poster is. The characters came out of a large library I have of characters drawn in various notebooks, I chose the ones that had to be there”.

Jaume Mora (Valencia, 1995) trained in illustration at the EASD Alcoi, has a versatile style that has allowed him to carry out different types of work, specialising in editorial illustration for the press and poster design. The endearing characters, the use of textures and the predominance of the colour yellow in his illustrations as a symbol of good luck and good humour, which reflect his personality very well.

He has participated in various group exhibitions and some solo exhibitions in different cities. In his portfolio of clients we can see his versatility, making editorial covers for Bromera, Ediciones Hidroavión and for literary projects for the ABC Museum in collaboration with Coca Cola; illustrating magazine pages such as Ferida and Valencia Plaza; and even making beer and wine labels for Antiga Brewing & Co and Aida and Luis Vinyaters; and illustrating for the Cuban independent press.

The 14th edition of La Cabina – Festival Internacional de Mediometrajes de València will be held from 9 to 19 November this year and is organised by the Aula de Cinema del Vicerectorat de Cultura i Esport and the Fundació General de la Universitat de València, with the collaboration of the Conselleria de Cultura de la Generalitat Valenciana through the Institut Valencià de Cultura and the Direcció General de Cultura i Patrimoni, the Regidoria d’Acció Cultural de l’Ajuntament de València, Diputació de València and with the official sponsorship of Caixa Popular and Cerveza Turia.