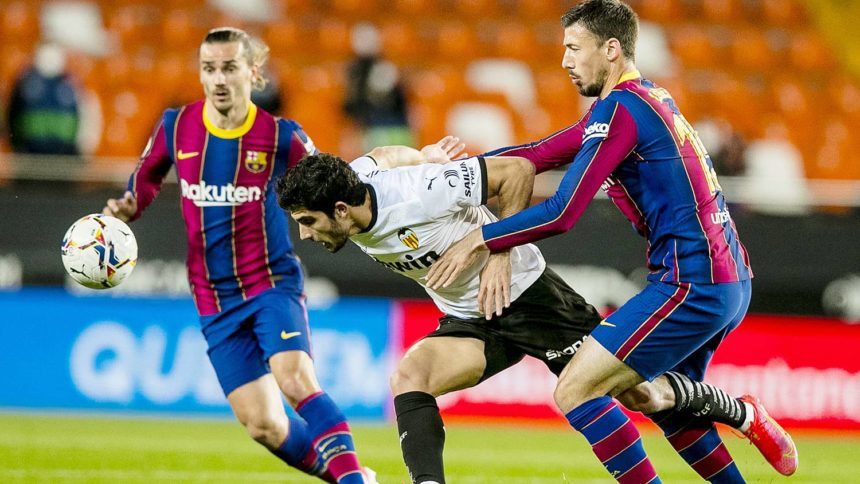 ##It has not been a good month for Valencia CF and football in general.

The sacking of the manager, accusations of racism, an aborted Super League, and the “white elephant” of the new Mestalla have all been at the forefront of the news recently, as the greatest sport in the world looks to find its inner soul.

The writing had been on the wall for Javi Gracia since the turn of the year. After the popularity of Marcelino and the sales of key players, it was always going to be a tough ask for the man from Pamplona to win over the fans and please the club’s hierarchy at the same time. Unfortunately, he failed to achieve both.

Week by week, relations between the trainer and the owners had become stormier and stormier. Tactics were questioned and many of his decisions disapproved of. Also, none of the January signings have had much playing time… suggesting the manager had little say in their arrival to the Mestalla.

Something had to give and eventually Gracia got his marching orders with four matches left in the season. For the remainder of the fixtures, the ever reliable Voro will take the realm. The timing o by the owners is illogical at best. Press speculation will undoubtedly turn to José Mourinho and Rafa Benitez as potential candidates to head Valencia into their next league campaign.

Then there was Valencia’s recent trip to Cádiz, which turned into a nightmare on and off the pitch. The 2-1 defeat was overshadowed by an alleged racist insult, aimed at Valencia defender Mouctar Diakhaby by the Cadiz player Juan Cala.

In the 29th minute of the game, Cala made a remark when running past the Los Che number 12 that clearly enraged the Frenchman. Forgetting about the match, Diakhaby chased Cala down to confront him over the comment.

A melee ensued as the referee deliberated on the chain of events that had just occurred. The end result was a booking for the Valencia player and no action against Cala.

Diakhaby explained to the referee what had been said, which led to Paulista and Gayà deciding to lead the Valencia players off the pitch. A stand-off took place for around twenty minutes as frantic conversations took place in the dressing rooms.

During this elapsed time Valencia released an official statement saying ‘We support you Mouctar. No to Racism’. Valencia eventually returned around twenty minutes later minus Diakhaby.

After the game had finished, Gayà explained that Valencia were looking at potential sanctions unless they returned to the field of play, and “Diaka” wanted his team mates to go out and finish the game, although he himself had no appetite to do so.

The Spanish football federation looked into the allegations after the fact, but ended up sitting firmly on the fence, suggesting there was not enough evidence to either confirm or deny that Cala made a racist comment.

A few weeks later the existing fabric of football was thrown into turmoil, with the news that twelve teams (including three Spanish clubs) had been clandestinely working to create an elite breakaway Super League.

Valencia was one of the first clubs to publicly admonish the actions of Barcelona, Atlético and Real Madrid with a sobering response that plucked at the heart strings of every true football supporter.

The lengthy statement talked about football traditions and the dreams of smaller clubs being destroyed, and that the idea was “nothing more than a selfish, egotistical proposal designed to further enrich the already super rich.”

Within days of the announcement, the British clubs in the pact were backtracking as a consequence of the backlash to the idea from the fans. Atlético then followed suit but Barcelona, and in particular, Real Madrid remained in favour of continuing down the Super League route.

Florentino Pérez, the Real Madrid president, was one of the kingpins in the development of the Super League and was earmarked for the role of President in the organisation. Clearly, UEFA President Aleksander Ceferin felt betrayed by the twelve elite clubs and he has implied that sanctions will be implemented.

Although the breakaway has been repelled, it is only the tip of the iceberg…and the storm brewing as a result of this revelation could lead to more personnel changes, fans rebellion, and even more postponed games like the recent Manchester United v Liverpool fixture.

One impending battle that seems to be slipping under the radar in Valencia is the continued conflict between the club and the owners over the New Mestalla.

Building started on the stadium in the summer of 2007 but it has been a disaster from day one. The planned new ground with a proposed retractable roof was originally in pole position to host the 2011 Champions League Final in the early days of the venture.

Nearly 14 years and numerous downgrades to the initial plans later, and the stadium is still just an empty shell on the Valencia skyline.

With no real work on the stadium for over a decade the landmark is now in a state of disrepair. Anil Murthy has reiterated the owner’s intentions to finish off the project but confidence in this happening is low. Recently, it was reported in the sports paper “Marca” that the President of the Comunidad Valenciana Ximo Puig had claimed that the credibility of the club was “at a minimum” within the community and with the supporters. Murthy responded by claiming the comments as “irresponsible attacks.”

It is not a good time for the owners to get into a public spat with the local government though as the ATE (Strategic Territorial Action) plan for the stadium compliance expires on May 15th.

This plan refers to the old Mestalla being sold and the creation of the new ground. Without an extension being granted, and an agreement being made, we can look forward to the possibility of a long drawn out battle in the law courts between the two parties.

On the field, performances have also been underwhelming. Without a win in six games, Los Che are in danger of being drawn into the relegation battle once again. Defeats to Cádiz, Osasuna and Barcelona, and draws with Betis, Real Sociedad and Alavés have given Valencia only three points out of a possible eighteen. A similar points ratio from their last four games might not be enough to maintain La Liga status, as Valencia’s rivals in the league table are all currently continuing to produce positive results at regular intervals. Realistically, at the moment, seven teams (including Valencia) could end up in one of the three relegation spots by the end of the season in May.

Levante’s form in recent weeks has also been uninspiring. However, with two points and one more place above Valencia… they really only need one more victory to secure La Liga football for another year.