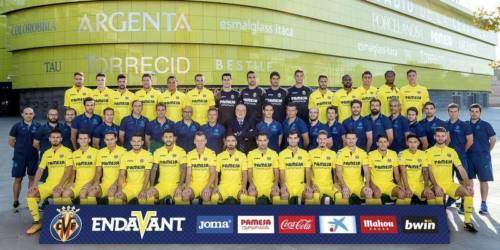 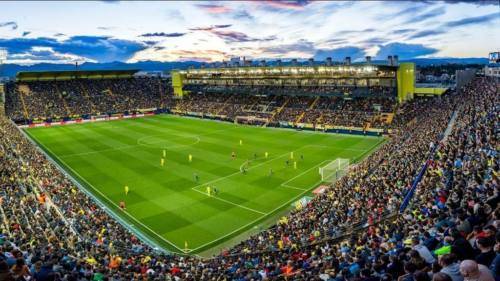 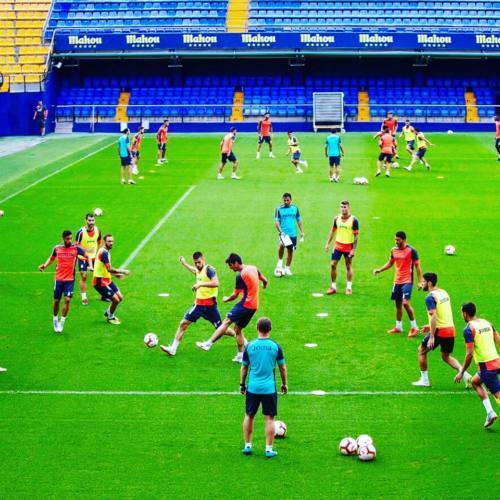 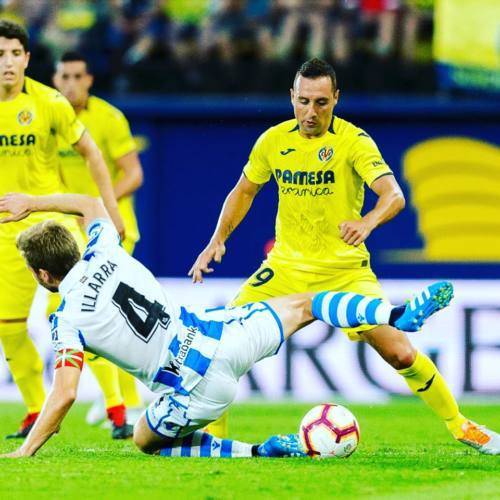 Valencia CF and Levante UD are frequently cited as the main football clubs in the Comunidad Valenciana. However, a third club called Villarreal FC has pushed its way to the forefront in recent times and has firmly established itself as one of the success stories of Spanish soccer.

Just one hour North of Valencia, the sleepy little city of Villarreal has around 50,000 inhabitants. They have seen the stature of its football team flourish side by side with the growth of the ceramic industry in the area.

The club was founded in 1923 and they played their first ever match against a team named after the writer ‘Cervantes’. Originally playing in white, they changed by chance to their current yellow shirts in 1947.  The President’s son was charged with obtaining a kit for that season and travelled to Valencia to buy a new strip. When he arrived there he was unable to find any white shirts, so he bought the only colour he could find that was in stock and that happened to be yellow. The players liked the change and the new kit was adopted.

The yellow strip also proved popular with fans and, with Villarreal slowly climbing through the mass of Spanish minor leagues, it was seen as a lucky omen. The strip then established a greater bearing in 1967 when the club took on the moniker “Yellow Submarine”. The Beatles song, although not popular in Spain, had just been released.  However, a cover of the song by the Spanish band Los Mustang followed shortly afterwards. This Spanish version quadrupled the sales of that song by The Beatles in Spain and legend suggests that Villarreal fans began to play the song at games and started a chant “Amarillo es Villarreal. Amarillo es. Amarillo es.”

That year coincided with promotion for Villarreal to the Spanish third division and the city celebrated with choruses of ‘The Yellow Submarine’ blasting out from every street corner when the season concluded. The song became firmly synonymous with the club. To this day, the song reverberates from the radio tannoy inside the stadium just before the start of every home game.

Financially secure from the investment from the wealthy ceramic companies like Porcelanosa and Argenta Cerámica, the club went from strength to strength but a game changer came in the summer of 1997 when Fernando Roig bought his local club. The Valencia born businessman is the majority shareholder of the supermarket chain Mercadona and his ambitious aim was to get the club into La Liga within two years.

He managed it in one with Villarreal winning a play- off against SD Compostela (who had finished 17th in the premier division). However, the very next season the club were relegated with many detractors suggesting the “bubble had burst”. Undeterred, Roig fed more funds into the club and Villarreal returned to the top flight at the first time of asking. Once again, belittlers  commented that the club would struggle to maintain its La Liga status but a 7th placed finish next time out confounded their critics.

The next ambition for Villarreal was to see European football at ‘El Madrigal’. Their first foray into European territory came in 2002 in the underwhelming Intertoto Cup. At the time, any clubs that wanted to participate in that event could apply and the application from the teams with the highest-placed league positions in that country would be accepted. So, despite finishing 15th in the league that year Villarreal had European football of sorts and a match up with Fimleikafélag Hafnarfjarðar of Iceland.

. The Yellow Submarine passed the challenge set by their Icelandic counterparts with ease and brushed Torino and Troyes aside before losing out to the Spanish rivals Malaga in the final. The following year, Villarreal went one better and won the trophy outright with a victory over Sportclub Heerenveen of Holland.

That same year Villarreal played in the UEFA Cup (Europa League) and reached the semi-finals before losing, ironically to Valencia, over two legs by the solitary goal. A goalless draw at El Madrigal gave Villarreal hope but a Mista penalty early in the game gave Valencia the victory. This is perhaps the most prestigious game between the two clubs to date.

The golden prize of the Champions League now beckoned and it became a dream realised when they participated in the 2005-2006 event. It also proved to be their most successful as they went all the way to the semi-final before losing to Arsenal 1-0 on aggregate. Jens Lehmann’s save from Riquelme’s last minute penalty remains a firmly entrenched vision for many Gunners and Villarreal fans alike.

Since then, more often than not, Villarreal have been in Europe. The only hiccough this century was relegation in the 2011-12 season despite playing in the main draw of the Champions League that year as well. Again, Villarreal came back up at the first attempt and they have found themselves competing in Europe every year since then.

This year they participate in the Europa League and last week Villarreal had two marquee games so ‘24/7 Valencia’ went to the ‘Estadio de la Cerámica’ (it changed its name from El Madrigal last year) to see how the Yellow Submarine faired in their matches with Glasgow Rangers and the ‘Derbi de la Comunitat’ with Valencia.

The Rangers game had been deemed high risk by police and no ticket sales would be sold on line. Hopeful expats were also denied a chance to see the Scottish club as no tickets would be sold at the club shop or taquillas to anyone without first producing a “Documento Nacional de Identidad” (DNI card).

As a result, a sparse stadium greeted both teams onto the field. Within 45 seconds ‘The Teddy Bears’ were a goal down thanks to a superb strike by Villarreal striker Carlos Bacca. The Rangers fans responded with their “Protestant anthems” and tried to lift their side from this early blow. Steven Gerrard’s side continued to play with grit and determination but the skill factor clearly belonged to the home side as they tried in vain to double their lead before half time.

The second half saw Villarreal initially continue to impress with Santi Cazorla pulling strings in midfield and being influential in everything good the home side created. Five minutes into the second half, Bacca missed an open goal from outside the area after McGregor had smothered a shot from Toko Ekambi.

Rangers gradually came into the game and started having the greater amount of position as they probed for an equaliser. In the 67th minute, their efforts were rewarded. A mazy run by Tavernier took him into the penalty box where he touched it off to Candeais. The Portuguese winger then pulled the ball back from the byline to an unmarked Scott Arfield, who gleefully rammed the ball home from close range.

Parity was short lived as Villarreal went back ahead within two minutes. Gerard Moreno received the ball and cut inside onto his favoured left foot, before hitting a low shot inside McGregor’s near post.

Rangers as a team now have a lot of the Steven Gerrard drive and mentality about them and the best play of the match saw the Glaswegian side equalise once again.

A sweeping move along the floor down the left hand side of the pitch involving Middleton and Barisic ended with the Croatian slotting a cross right into the path of the oncoming Kyle Lafferty, and the football journeyman made no mistake with his first time effort.

The last fifteen minutes saw both sides have opportunities to take all three points but the game ended in a stalemate. Rangers will be the happier of the two sides going into the next group matches that will also involve Rapid Vienna and Spartak Moscow.

Three days later ‘24/7 Valencia’ magazine were back for the Villarreal/Valencia derby. Before the game, the hosts announced a new sponsorship deal with Ferro Spain, another industrial leader in the ceramics sector and also placed 18,000 yellow plastic flags on the seats of the Villarreal supporters.

Unsurprisingly, the stadium was a sea of yellow as the teams emerged. With Javi Fuego injured, Villarreal had only Víctor Ruiz playing against his former club, whilst Valencia had Gabriel Paulista, Denís Chéryshev, and of course, Marcelino back at their old stomping ground.

The game itself failed to live up to expectations and both sides ended the game without bulging the back of the net. The major talking point came in the 58th minute when Dani Parejo was given a straight red card for an innocuous-looking tackle on the former Everton favourite Ramiro Funes Mori.

Marcelino soon followed for remonstrating the decision far too vociferously with the fourth official. Shortly afterwards he was caught by the TV cameras on the phone talking to one of the Valencia supporting staff in the dugout, an action that could land him in even further trouble with the Spanish Football Federation.

Despite the two home draws, Villarreal continue on an upward curve. Financially, they are stable and the family club have a strong base of fans that will come and support their team through thick and thin. You could easily argue Villarreal are in a “better place” at this moment in time than Levante UD and Valencia CF who will certainly need to improve their “game” if they don’t want to be overtaken by this club on the world stage. Time will tell if Villarreal FC will become the biggest club in the ‘Comunidad’ but back against them at your peril.