You are here: Home  /  Sports  /  VALENCIA FOOTBALL…JURY STILL OUT ON THE ROTATION SYSTEM
Sports 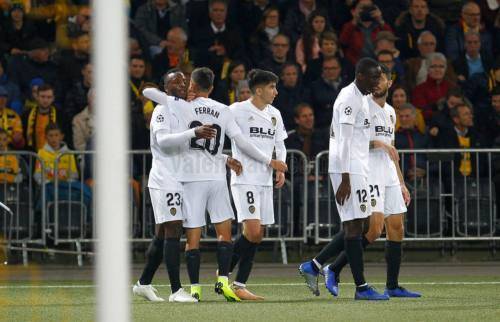 VALENCIA FOOTBALL…JURY STILL OUT ON THE ROTATION SYSTEM

Valencia CF continue to slowly claw themselves up the league ladder with improved performances but concern continues to grow over the rotation system policy that Marcelino has adopted.

Last season, there was the occasional tinkering of the squad but at times this campaign there has been a complete hatchet job. The defence is finally beginning to get a settled look to it but the forward line continues to be swapped around more regularly than Panini stickers in the school playground.

Santi Mina, Rodrigo, Gameiro, Guedes, Chéryshev, Ferran Torres and Batshuayi have all featured up front, which may explain why goals have been at a premium in the first eight league games and the two Champions League encounters.

The pleasing thing is that Valencia are now starting to play exciting football again and the true benefits of any rotation system are likely to emerge further down the line when other squads with less depth start tiring and accruing injuries.

After the pulsating derby with Levante UD in early September, Valencia returned back to the Mestalla to play hosts to Real Betis. With this game, Juventus in the Champions League and Villarreal at the Estadio de la Cerámica within a week of each other… it seemed the ideal time to exploit the depth of the squad and use the bench to good effect.

Betis succeeded in their game plan to frustrate the hosts and go away from the Mestalla unbeaten. Valencia squandered a few chances but looked lacklustre up front despite some creative midfield play. Parejo came closest to scoring, hitting the crossbar. However, the biggest cheer from the fans that day was the sight of Joaquín entering the fray in the 62nd minute for the Andalusian visitors.

With the Juventus game just a few days away, the worry of where the goals would come from against the stingiest of back fours was foremost on the minds of half the Valencia faithful. The other half were fretting on how the players would stop Ronaldo causing havoc amongst Los Che’s defence.

The latter was solved by the referee, who harshly sent off the petulant superstar in the 29th minute for an innocuous looking challenge on Murillo in the Valencia penalty area. Before that another former Real Madrid player, Sami Khedira, had been forced off with injury. So, if there was ever a good time to go for the jugular and send the ‘Old Lady’ off to bed early it was then. Unfortunately, it was Valencia who would have the nightmares, as their naivety at the very top level gave Juventus a “get out of jail card” that the Italian team gleefully accepted.

Two very avoidable penalties gave the team from Turin the 3 points. First, Parejo put his foot in the face of his former team mate João Cancelo just inside the area, just when it seemed the danger had been averted! In the second half, Murillo laid hands on a Juve player from a corner that the German referee Felix Brych deemed was illegal.

It was evident a directive had gone out, from the governing bodies during the 2018 World Cup, that grappling from corners between opponents would no longer be tolerated and fouls would be given in either direction in future. This has not translated onto the La Liga stage as yet but the first games of this year’s Champions League proved it would be endorsed at this level and Valencia were one of several clubs to be taught this harsh lesson in the opening match of the group games.

Pjanic dutifully converted the two gifts Valencia gave the Italians and the opportunity to give the fans another magic night at the Mestalla was gone. Confidence seemed low, even when on level terms against ten men, and only Carlos Soler came out of the night with any real credit. To cap off an awful evening for the fans, Parejo saw his penalty saved by Wojciech Szczęsny with the final piece of action in the game.

Valencia then had to pick themselves up and go to their local rivals Villarreal. The ‘Yellow Submarine’ had been in action themselves in Europe, drawing two a piece with Glasgow Rangers in Spain the night after Valencia’s defeat to Juventus.

Before the game, the hosts placed 18,000 yellow plastic flags on the seats of the Villarreal supporters. Unsurprisingly, the stadium was a sea of yellow as the teams emerged. With Javi Fuego injured, Villarreal had only Victor Ruiz playing against his former club. In contrast, Valencia had Gabriel Paulista, Denis Chéryshev and manager Marcelino back at their old stomping ground.

The match itself failed to live up to expectations and both sides ended the game without bulging the back of the net. The major talking point came in the 58th minute when Dani Parejo was given a straight red card for what looked like a clumsy tackle on the former Everton favourite Ramiro Funes Mori.

Marcelino soon followed for remonstrating the decision far too vociferously with the fourth official. Shortly afterwards, he was caught by the TV cameras on the phone talking to one of the Valencia supporting staff in the dug-out. This is an action that could land him in even further trouble with the Spanish Football Federation.

With the Valencia coach restricted to the stands after receiving a two match ban for his antics during the Villarreal game, assistant coach Juan Rubén Uría Corral was in charge for the home match against Celta. The hosts started well when Batshuayi scored his first goal for the club, just shy of the half hour mark. Valencia looked in control and seemed to be cruising for three points.

The one thing they had to do more than anything was to deny Iago Aspas an opportunity. The Spanish striker is in many ways the forward version of Sergio Ramos, on and off the field. He is always likely to get you some sort of reward late in a game on the field. Away from play, it has been said that he is universally disliked by fans around the country… although almost all would love him in their side!

With a petulance akin to Ronaldo, his bookings like his goal ratio is very high. He got both in the Valencia game, a yellow card in the first half for arguing with the referee and a poacher’s goal nine minutes from time when his run between two defenders gave him the space and time to glance a finely judged header, just wide of Neto.

The disappointment of not gaining the first league win for Valencia fans was apparent in the street conversations after the game, as supporters ferried out of the stadium back to the various barrios in the city. However, the fans did not have to wait too long as the next game gave Valencia their first victory when the team came back from the Basque region with a 1-0 win over Real Sociedad. Even that required a penalty save from Neto, after Gameiro had opened his league account for Valencia in the 36th minute.

Two huge games followed for Valencia. First, a trip to Old Trafford for game two of the Champions league and then Barcelona at home. The Manchester United contest ended in a goalless draw but the Red Devils were there for the taking and a more positive approach could have given the visitors three points instead of one.

When Barcelona are in town the atmosphere at the Mestalla is always electric. When Valencia go one goal up inside the first minute then the place is rocking. Then, for the next fifteen minutes, Guedes and Gaya ruled the right hand side of the Barcelona defence and were a constant threat on Ter Stegen’s goal. That was until the Portuguese star went off injured. Chéryshev came on as a replacement but the chemistry between the Russian and Spanish international is a work in progress and not the finished article.

Consequently, Barcelona came more and more and more into the game and it was no surprise when Messi equalised with a crisp shot after a typically fluid move from the Catalans. The second half was equally absorbing with possession belonging almost exclusively to the Catalans at times. Paulista and Garay were immense at the back for Los Che and they are starting to gel in the same way that Otamendi and Mustafi did. The last fifteen minutes saw the visitors camped in Valencia’s half. However, buoyed on by the fans, the hosts were in no mood to give a goal away. They held out for their sixth draw in eight games to give their supporters renewed hope that it will be only a matter of time before Valencia are vying for the European spots in La Liga again.

Meanwhile, Levante UD are going quietly about their business and looking a match for anyone. No team has not lost or not won at least one game in the league after just eight games and the relative parity between the majority of clubs is something ‘Los Granotas’ have taken advantage of. Recent wins over Alavés at home and Getafe away have left them sitting in a comfortable mid-table position.

Anyone wishing to get tickets for Valencia or Levante games can do so by visiting the box offices at the ground or through their respective websites: