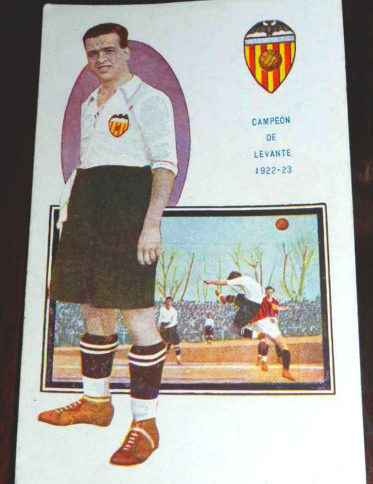 Back in 1919, a young group of Valencians established Valencia Club de Fútbol. In fact, March 1 marks the anniversary of the day the club charter was signed in ‘Bar Torino’ that used to be located within the Plaza del Ayuntamiento area of Valencia. Today, there is a commemorative plaque to mark the birth of Valencianismo in what is known as the 0km.  Today we celebrate José “Marinet” Marín. He is the grandfather of a long-term feature writer at ‘24/7 Valencia’, José Antonio Marin!

José  “Marinet” Marín  was a fundamental player in the first seven years of the team.

José was one of the players to form the first Valencia CF team, back in the amateur era of the club. He was a tailor as well as a footballer.  He won the hearts of Valencia CF fans and the local press by preserving the club’s transition into a professional club with the arrival of salaried players at Mestalla.

José Marín Marín was officially a midfielder on the right-wing, who the press at the time often described as a defender as his strengths were in maintaining the ball and putting pressure on the opponents. Despite his positioning on the field, Marinet scored 11 important goals during his long career with Valencia CF.

“A  compact  midfielder, trained in the Salesian school of Father Viñas, José Marinet was an essential part of the team of  amateur players at the very beginning of Valencia CF’s illustrious history.”

“When Mestalla had filled up with professional footballers, the press referred to José Marín Marín as ‘Marinet d’Algirós’, in the style of a knight-errant, yearning for his defensive grit.”

“In the physical game of football , Marín stuck to the ground as the infantry manuals dictate and fought hard, for good or for bad, to win back every ball. When he won the ball, he would dribble it with ease, although he was always more at home in holding duties.”

“Somewhat cat-like in his procedures, due to his physicality and trickery, the fans never stopped calling for him when the professional signings tried to make him second choice. He survived a few seasons as the first replacement in the midfield and then moved to Juvenal, without abandoning his tailoring business.  He played as a valencianista from 1919 to 1926, with a total of 19504 minutes played and 220 games played.”

The importance of José Marín Marín in those fundamental years of the club can be supported by the conquest of the first three official trophies: the Regional Championships of 1923, 1925, and 1926.

In September 1926, José “Marinet” Marín played his last game for Valencia CF, however, his contribution to the club is continuing to be recognised as even after his retirement, he remained active within the club for all of his life.

As his grandson and ’24/7 Valencia’ feature writer José Antonio Marín adds about his grandfather:  “José  Marín Marín’s  sporting career began in 1917 and 1918 with Gimnástico de Sagunto, a team founded by the Salesian Padre Viñas which played in the Estación de Madera and took its name from the nearby Calle de Sagunto. At that time he lived with his parents, Roque Marín Benedicto and Josefina Marín Pérez, in the craftsmen’s houses of the nearby Monasterio de la Trinidad, in Calle de Alboraia, where our great-grandfather and great-great-grandfather, Roque, worked as a “nuns’ shoemaker”. In 1919 he went on to play for Valencia CF, forming part of the line-up in the inaugural match at the old Algirós ground against Castalia de Castellón. 21 times international, he remained active until 1926. Although, once he retired, he remained linked with the Club until his death.”

As a founding player of the club, it would have given José “Marinet” Marín great joy to know that Valencia CF won La Liga… just a few months after his passing… in 1971.