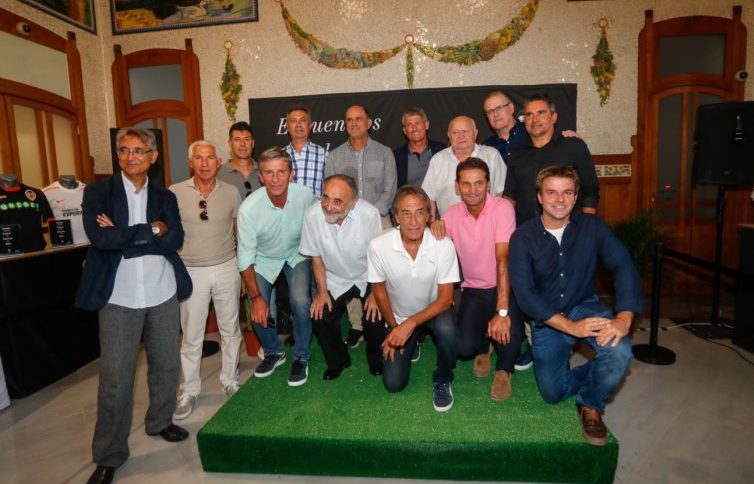 Legendary former players Guillot, Sempere and Juan Sánchez fill  the Estación del Norte exhibition hall with ‘sentiment’ in the “Meeting of Legends” of Valencia CF, which will tour the Valencian Community.

– Shirts and unique objects from the club’s history will be on display, such as the ball from the Copa del Rey 2019 final, Zigic’s torn shirt or the Centenary shirt signed by all those who played for the club.

The Valencia CF Footballers’ Association celebrates its 25th Anniversary this season and, to commemorate it, the exhibition “Encuentros de Leyenda” was inaugurated, which will tour the Valencian Community and whose first stop is at the Valencia Tain Station ‘Estación del Norte’, where it will be located for the whole week. The exhibition, which floods the Mosaic Hall of the station with Valencianista ‘sentiment’, with a talk between Vicente Guillot, José Manuel Sempere and Juan Sánchez, who guided those present on the history of Valencia CF.

The exhibition will be located in the Sala de los Mosaicos at Valencia’s Estación del Norte from 6th to 11th of September from 10.00h to 14.00h and from 16.00h to 20.00h and will feature a collection of 25 shirts from recent seasons, unique objects from the club’s history, footballs from the 2019 and 2022 Copa del Rey finals, as well as informative milestones of some of the players who have marked an era in the last quarter of a century. Thus, visitors can see the certified prints and shirts of some of the legends of ‘Valencianismo’ such as Fernando Gómez, Angulo, or José Luis Gayà, captain of the Valencia CF first team.

Moderated by former player and member Javier Gallego, the presentation was made by the president of the VCF Footballers’ Association, Fernando Giner, who explained that “this is another step towards honouring the history of the club and the teammates who played a leading role in it”. One of them, Ricardo Arias, Valencia CF ambassador, took advantage of his turn to speak to say that he was a “proud member of the Association” and that “there are more colleagues represented in exhibitions than the twelve privileged ones that appear on the Mestalla canvases. There are a lot of us at Valencia CF”.

Juan Bautista Cano, Deputy Director of Estaciones Este, added  that the station “will always have its doors open for whatever all Valencians want” and reminded the audience that the main hall of the Estación del Norte will host the 1st City of Valencia A-Ball Trophy on 10th and 11th September, which brings together for the first time in the same city all the teams that play this game.

Among the attendees were Valencia CF ambassador Miguel Ángel Bossio, Fernando Gómez Colomer and the president of the Agrupación de Peñas, Federico Sagreras, as well as Luis Alcalá, Arturo Boix and Antonio Payá, directors of the Association, the lawyer Pepe Rico, founder of the Association and Raquel Sanz, from NAIBC, as well as a hundred fans… who did not want to miss the inauguration.

A colloquium of ‘sentiment’ Valencianista
The first Meeting of Legends was moderated by Javier Gallego and, as with all future talks, the Valencia CF Footballers’ Association’s aim is for each of the protagonists to tell their story and explain what it meant to be a Valencianista in their time and in their hometown. The exhibition will travel to different parts of the Valencian Community and change its protagonists in order to bring the history of the club and the Association closer to the fans of the various localities. On this occasion, Vicente Guillot, José Manuel Sempere and Juan Sánchez recalled their beginnings, their idols and what few people know, such as when Sánchez confessed that he is a Valencia player “thanks to Guillot, who went to my pueblo to pick me up for training”, to which Vicente took credit for leaving it all to “my father, who brought me every day  to train and took me home late at night”. Guillot confessed that he became a footballer thanks to a Salesian priest who, “when my father told me to work, convinced me not to give football up.” The story of José Manuel Sempere, who came to Mestalla when “the natural thing in my town was to play for Elche or Hércules”, acknowledged the Torrellano-born goalkeeper, who “idolised Kempes, although I looked up to Pereira a lot”.

Until September 11th
The exhibition was created with the firm intention of making the history of Valencia CF and the Footballers’ Association a little more known, but from the point of view of its protagonists and with unique objects. The exhibition will be located in the Sala de los Mosaicos of the Estación del Norte in Valencia from 6 to 11 September from 10.00h to 14.00h and from 16.00h to 20.00h and features objects belonging to the Association, donated by the players themselves and by collectors José Ponce and Juan B. Escrivá. Among those who come to the Exhibition, there will be a draw through our Instagram profile https://www.instagram.com/futbolistasvcf/ for signed shirts from the first team and tickets for the Valencia CF-Celta de Vigo match.

With these kind of initiatives, Adif wants to bring railway stations closer to society as spaces not only for transit, but also for leisure and culture. This campaign is part of the promotional marketing plan that Adif develops every year in collaboration with initiatives that contribute to the dissemination of cultural and sports activities.