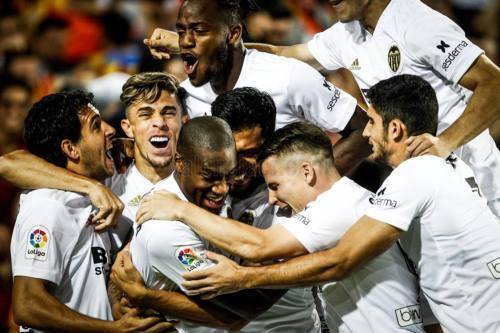 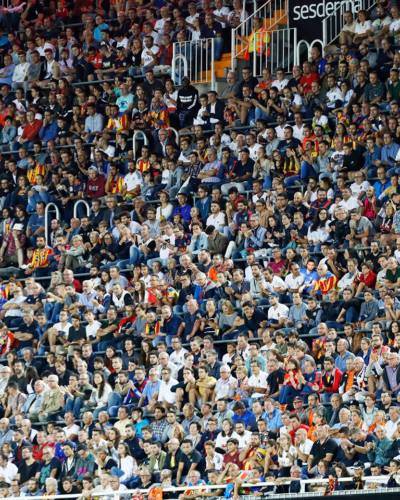 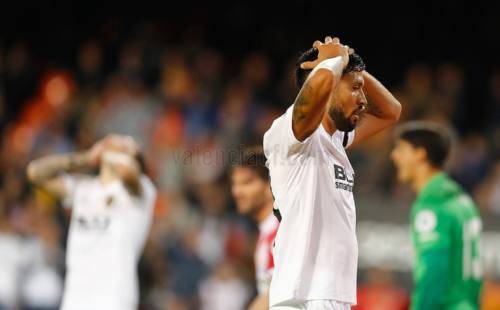 Marcelino and his team finally felt the full wrath of the Valencia CF fans’ sheer frustration after a series of disappointing results have left the club flirting with the relegation zone.

For the first time this season, the stadium was a sea of white handkerchiefs at the referee’s final whistle with Girona. Once again, the VCF players construed to drop points at home against a plucky team, albeit with little ambition or creativity. Instead, the Catalans relied on another Valencia self-inflicted defensive mistake and a forward line firing blanks. Consequently, Girona stole a result that their performance was not worthy of.

Time and time again this season, Los Che have gifted points to teams through clumsiness and poor concentration levels. Three of the four Champions League goals scored against Valencia to date have been as a result of needless penalties given away in a moment of madness or panic.

Almost a third of the way through the campaign and the club are wearing the tag of the “La Liga draw specialists”. In the eleven league games played so far, Valencia have drawn eight of them and the constant tinkering of the squad gives the team’s performances a lack of coherency & fluency.

The air of expectancy the fans felt after such a positive season last year has gradually drained away over the last couple of months. The rotation system deployed by Marcelino has not produced any positives as yet. The team’s centenary season has the possibility of going down as one of the most perplexing in the club’s history.

The home game against Leganés only seemed to intensify the murmurs of discontent at the Mestalla. A lacklustre performance saw Garay give away a stupid penalty midway through the second half…after the danger had been cleared! Gerard Gumbau stepped up and gleefully converted the gift he was presented.

Ten corners to one highlighted Valencia’s domination in the game but Parejo’s poor distribution in dead ball situations and sloppy finishing looked like giving the Madrid-based side three points.

However, late in the game, Gaya received the ball from the right after finding space on the left hand side of the pitch. He hit a cross-field shot from just inside the area, which took a wicked deflection before beating the outstretched hands of the goalkeeper.

The team’s next match was away at the majestic San Mamés against Athletic Bilbao and was another anti-climatic affair. Both sides are struggling for points and goals so it was unsurprising that the contest ended in a goaless stalemate.

Then, in the league, came the Girona encounter at the Mestalla. A carbon copy of the Leganés game in many ways. Domination throughout the match by Valencia, without any penetration, coupled with a serious defensive error that gifted the visitors a goal. Again, there was another squad rotation with Wass playing at right back for the first time. Kondogbia was given Parejo’s role, due to the latter being injured. However, this time there was to be no equaliser due to the superb performance in goal by Girona’s Canadian-born shot stopper ‘Bono.’

Guedes was clearly injured for the final third of the match, grimacing and collapsing to the ground every time he kicked the ball. When Gameiro and Batshuayi came on late in the game, the Portuguese star still remained on the pitch. Instead, Marcelino opted to change Wass and Coquelin (two of the better players on the day) but both of the oncoming strikers failed to make any kind of impact.

The one bright note was the quality of the dead ball deliveries from Wass. All of his corner kicks were dangerous-looking. Unlike Parejo’s corners, they always beat the first defender on the front post. Also, the one free-kick he had looked goal bound until crashing into the wall. With the Valencia skipper sidelined for a few weeks there is ample time for the Dane to submit a claim to Marcelino, proving he is the better option for taking all the set plays.

In truth, the gap between the big three in La Liga (Barcelona and the two Madrid clubs) and the others is not as great as it once was and this is reflected in the league table. If Valencia were playing the free-flowing football they were last year then they would be flying high in the league. This is the irritating thing for the fans as “on paper” they have a better squad than before. However, for some reason, the likes of Parejo and Rodrigo are shadows of the players they were last season.

Above all, they are missing the “Z” factor – Simone Zaza. A talisman on the pitch and an even greater influence off it. His presence has been greatly missed and his replacements, Gameiro and Batshuayi, have yet to convince the Mestalla they are suitable substitutes for the passionate Italian.

The one victory to come in October was in Zaragoza. A very young Valencia team took on CD Ebro in the Copa del Rey and came from a goal down to beat the club from the third group of ‘Segunda División B’. Kangin Lee started for Los Che and the youngster from Benidorm, Alex Blanco, also got a few minutes playing time. However, it was the experienced Santi Mina (himself only 22) who scored a brace to give Valencia a 2-1 lead going into the return fixture in early December.

With regard to Valencia in the Champions League and the two games with Young Boys of Bern… the away tie was in many ways also a mirror image of the matches against Leganés and Girona. The team looked comfortable and unthreatened until an unforced error changed the context of the game in Switzerland.  However, the home game did give some respite to Marcelino and joy to the fans as Valencia claimed a victory at the Mestalla for the first time in eight games. The crowd were treated to the celebratory goal antics of Santi Mina twice and Carlos Soler scored the goal of the match in a 3-1 win for the hosts.

The other news on the night was that Cristiano Ronaldo scored against his old club Manchester United to put Juventus in front. Amazingly, the Red Devils turned it around in the last four minutes. Firstly, Juan Mata levelled the tie and then in the last minute of normal time Sandro scored via his own goal. That United victory makes Valencia’s chances of getting out of the group stages increasingly tough with two matches still to play for each team.

The current woes for Valencia are of little concern to Levante UD fans who are enjoying a fantastic start to the season. The undoubted highlight to the ‘Granota’ faithful was the famous 2-1 away victory over Real Madrid at the Bernabéu recently. This result was sandwiched between victories over Getafe away and Leganés at home that gave them a 100% league record in October. November looked to also be starting with a victory for Levante until a late, late equaliser from Alfonso Pedraza Sag cancelled out a second half own goal from Ramiro Funes Mori to give the local derby game parity.

Anyone wishing to get tickets for Valencia or Levante games can do so by visiting the box offices at their ground or through the respective websites.