You are here: Home  /  Sports  /  VALENCIA FOOTBALL…STEADY START TO THE NEW SEASON
Sports 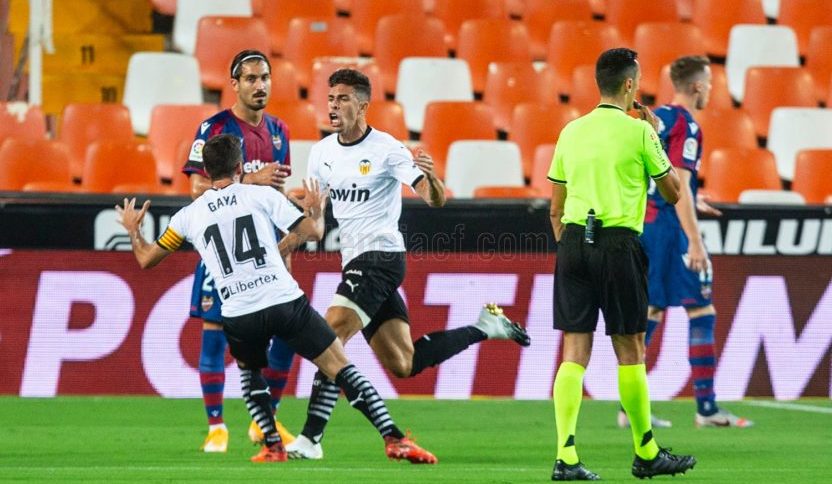 ##With all the turmoil off the field during the past few months, Valencia CF have surprised a few people and made a satisfactory start to the season.

With the squad size decreased in numbers due to outgoing transfers, and injuries to key defenders leaving Javi Gracia with selection headaches, most grounded Valencia fans would have taken the seven points they have accrued from their first four encounters.

The fixture list gave Valencia an interesting first game, a match up with their city rivals Levante UD. The teams had shown positive signs in the cluster of hastily organised friendlies they played against local clubs in the limited off season. Both sides had genuine reasons to feel they had the advantage, going into the match.

With armchair critics and orchestrated songs replacing the singing ‘Curva Nord’ and their spontaneous chants, the match got underway after the payment of respects to the former director of Levante UD, Ramón Vilar, who passed away recently.

Within a minute of the season being underway, Valencia were behind. A mazy run by the evergreen José Luis Morales into the home side’s penalty area, resulted in the Levante forward getting a shot away with the outside of his right foot that went wide of Jaume’s outstretched hand… to nestle inside his left goalpost.

The ease at which Morales weaved past defenders and the lack of intent in the challenges by the home defenders would have had Valencia fans at home cursing at the television.

Valencia composed themselves after the initial setback and were soon back on equal terms. Gabriel Paulista coming in late at the back post, made good contact with a Kang-In Lee corner and his header had enough power to creep inside the post…despite Aitor getting both hands to it.

The game was becoming a very entertaining affair and both sets of fans could not complain about the commitment of the two teams. However, Levante once again exposed the brittleness of Valencia at the back with Morales bagging a second after evading a Diakhaby challenge and hitting an unstoppable shot past Doménech.

Just before half time, the hosts equalised when Kang-In played a nice ball to Maxi Gómez. The Uruguayan forward still had a lot to do as the ball was rolling away from goal, but he managed to find a left foot shot from a tight angle that went across Aitor’s despairing dive and into the inviting goal.

The second half saw both teams have excellent chances to win the game. It was the substitute Manu Vallejo who made the difference, by scoring two late goals to get Valencia off to a winning start.

Next up for Los Che was a long trip to Galicia and a match with Celta Vigo. An underwhelming performance resulted in a 2-1 victory for the hosts. A brace from Iago Aspas, sandwiched a fantastic first time strike from Maxi Gómez, who graciously failed to celebrate the goal, out of admiration for his former club.

Newly promoted Huesca were Valencia´s next opponents. Once again, the Mestalla remained closed to the general public.

The team from the autonomous community of Aragón outplayed their more prestigious rivals for long periods of the game. They were incredibly unfortunate to go in at the interval on losing terms.

A speculative Daniel Wass free kick evaded everyone and crept inside the Huesca goalkeeper’s far post, to give the home side an undeserved lead.

Huesca continued to press and impress. In the second period, they were rewarded for their endeavours when Greek international Dimitris Siovas headed past Doménech from a corner.

The fact the Valencia stopper was the man of the match for the hosts highlights the lack of desire in the performance, which is something the substitute Kevin Gameiro alluded to in his post-match interview.

Valencia’s best result to date came from their visit to San Sebastián. Real Sociedad had finished two places above Los Che in the league last season, and they had also added David Silva to their ranks.

Silva started the game against Valencia, but made little impact at any time during the game, and was substituted in the second half. Maxi Gómez scored the winner, his third goal in four games, by rounding off a clinical counter attack. A sweeping pass by Wass, found Gaya on the left side, and his tantalising cross was bustled over the line by Maxi.

The part Wass and Gayà played in the goal on 75 minutes should not go unnoticed. For the first time in months, Wass was given his preferred role that Dani Parejo had held in recent times. Gayà was moved higher up the left hand side of the pitch to accommodate Toni Lato’s second half introduction. The balance between Lato and Gayà seemed much more coherent and playing Wass, for once in his right position, led to an outstanding performance by the likeable Dane.

The shrewd tactical awareness of Javi Gracia was summed up in this segment of play. If the manager is given support from the board, the signs are good. That said, the former Watford trainer is already hinting in the press that promises made at the time of his appointment to bring in new players remain unfulfilled. The worry is another ‘Prandelli’ scenario will occur. With the transfer window to close in a few days, it seems unlikely that there will be more than one or two new arrivals, despite constant links with varying players in the press in recent days.

One signing did occur that gained little or no attention. The controversial goalkeeper Unai Etxebarria signed for Valencia Mestalla. The Basque shot stopper was fired by Granada recently for wearing a t-shirt in support of prisoners in the ‘Alsasua’ case. With the uncertainty still surrounding the future of Dutch international Jasper Cillessen, he may find himself as back up to the first team as the season progresses.

Levante UD, meanwhile, put behind any disappointment of the first day loss to Valencia, by going out in their very next game and clobbering Osasuna. Los Granotas even had the luxury of missing a penalty in their 3-1 victory in Navarro that saw Melero, Martin and Morales on target.